Researchers led by Carnegie Mellon University’s Marcel Just and the University of Pittsburgh’s David Brent have developed an innovative and promising approach to identify suicidal individuals by analyzing the alterations in how their brains represent certain concepts, such as death, cruelty and trouble.

Suicidal risk is notoriously difficult to assess and predict. Suicide is the second-leading cause of death among young adults in USA.

“Our latest work is unique insofar as it identifies concept alterations that are associated with suicidal ideation and behavior, using machine-learning algorithms to assess the neural representation of specific concepts related to suicide. This gives us a window into the brain and mind, shedding light on how suicidal individuals think about suicide and emotion related concepts. What is central to this new study is that we can tell whether someone is considering suicide by the way that they are thinking about the death topics,” said Just, the D.O. Hebb University Professor of Psychology in CMU’s Dietrich College of Humanities and Social Sciences.

For the study, Just and Brent, who holds a chair in suicide studies and is a professor of psychiatry, pediatrics, epidemiology and clinical and translational science at Pitt, presented a list of ten death words.

They applied the machine-learning algorithm to six word-concepts that best discriminated between the two groups as the participants thought about each one while in the brain scanner.

These were death, cruelty, trouble, carefree, good and praise. Based on the brain representations of these six concepts, their program was able to identify with 91 percent accuracy whether a participant was from the control or suicidal group.

Then, focusing on the suicidal ideators, they used a similar approach to see if the algorithm could identify participants who had made a previous suicide attempt from those who only thought about it. The program was able to accurately distinguish the nine who had attempted to take their lives with 94% accuracy.

“Further testing of this approach in a larger sample will determine its generality and its ability to predict future suicidal behavior, and could give clinicians in the future a way to identify, monitor and perhaps intervene with the altered and often distorted thinking that so often characterizes seriously suicidal individuals,” said Brent. 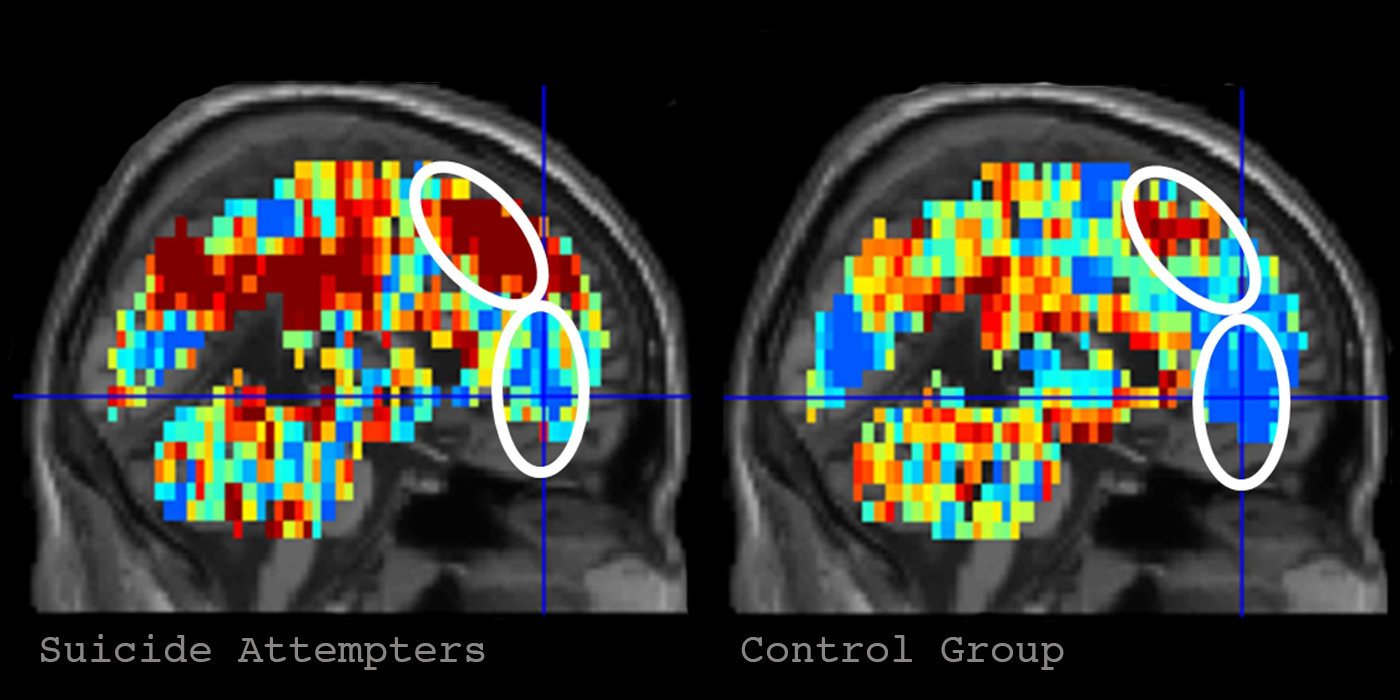 Human life is important in Islam and no one has the right to override its sanctity by any means. Prophet Muhammad (PBUH) said, in many hadiths, that committing suicide was a great sin.

Also, during a battle between Muslims and non-Muslims, a follower of the Prophet Muhammad sustained injuries. He was suffering from intolerable pain, stabbed himself with his sword and died. The Prophet Muhammad disfavored this action. And said that he would certainly burn in hell (Sahih Muslim vol.1 book 1 no.205 p.63).

Islam doesn’t stop at this point of forbidding suicide and punishing suiciders in the afterlife. On the contrary, it solves this problem via a holistic approach through two means. The first solution is that it encourages humankind to conduct researches to fight depression and all suicide triggers.

The second solution depends on this hadith; Prophet Muhammad (PBUH) said: “No pain, hardship, sickness or grief befalls a believer, not even worry that befalls him, but some of his bad deeds will be expiated.” Narrated by al-Bukhaari (5642) and Muslim (2573).

Allah teaches us that the believer must handle the life’s hardships well. A believer must be patient and turn to Allah and strive hard in worship and righteous deeds. As a result, the calamity will be expiation for the sins. And he will meet Allah with no burden of sin.

To further understand what caused the suicidal and nonsuicidal participants to have different brain activation patterns for specific thoughts, Just and Brent used an archive of neural signatures for emotions (particularly sadness, shame, anger and pride) to measure the amount of each emotion that was evoked in a participant’s brain by each of the six discriminating concepts.

The machine-learning program was able to accurately predict which group the participant belonged to. It accuracy reached 85% based on the differences in the emotion signatures of the concepts.

“The benefit of this latter approach, called explainable artificial intelligence, is more revealing of what discriminates the two groups. Namely the types of emotions that the discriminating words evoke,” Just said.

“People with suicidal thoughts experience different emotions when they think about some of the test concepts. For example, the concept of ‘death’ evoked more shame and more sadness in the group that thought about suicide. This understanding may suggest an avenue to treatment that changes the emotional response to certain concepts.”

Researchers are hopeful that the findings from this basic cognitive neuroscience research can save lives. “The most immediate need is to apply these findings to a much larger sample. Then, use it to predict future suicide attempts,” said Brent.

Just and his CMU colleague Tom Mitchell first pioneered this application of machine learning to brain imaging. They used it to identify concepts from their brain activation signatures.

Since then, the research has been extended to identify emotions and multi-concept thoughts from their neural signatures. Moreover, they used it to uncover how complex scientific concepts are coded as they are being learned.