Where should women offer prayer within a mosque? And where did they pray during the lifetime of the Prophet (peace and blessings be upon him)?

In Muslim countries, mosques that designate areas for women’s prayer rarely allow women to line up directly behind men in the same hall as was the practice in the Prophet’s Mosque during his lifetime.

In many Arab countries, it is common to separate men’s prayer place from women’s, especially in small mosques. The distance between the two prayer areas varies from one mosque to another.

The majority of mosques in Muslim countries contain special halls or small rooms for women in the basement, in the ground floor, in a closed balcony, or in a small building attached to the mosque. Speakers are used to communicate the Imam’s voice in prayer.

The problem in confining women to such halls is manifold:

First, these halls are much smaller than the main prayer hall, and are usually overcrowded especially during the Friday Prayer and other occasions while men’s prayer areas and mosque halls are far from full. Sometimes women outnumber men in public occasions, especially in countries with Muslim minorities.

Second, these halls are not as properly equipped and furnished as men’s halls are, in terms of carpets, lights and sound devices. Hence, women feel less welcomed and less privileged than men in mosques.

Third, the places assigned for children in these mosques are attached only to women halls, which causes much distraction for them.

Fourth, women are not allowed to enter mosques through their main gates; rather, they have to use narrow side entrances or backdoors.

Last but not least, this common design of mosques gives a manifest impression to non-Muslim visitors and also to new youth generations, males and females alike, that Islam marginalizes or isolates women, especially when they notice the incommodious, poorly furnished and noisy prayer halls of women.

They will have the impression that Islam does not approve of women’s presence in prayer places or that men in Islam do not share the burden of caring for children, or even that Islam is a religion for males only, as is claimed by some non-Muslims.

The design of the Prophet’s Mosque during his lifetime was like the drawing below. 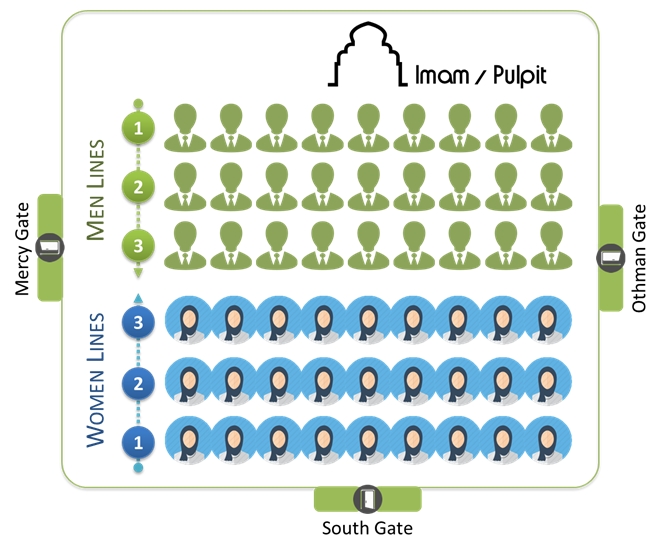 The established Sunnah throughout the Prophet’s life was that men formed rows right behind the Prophet (peace and blessings be upon him), and rows went backward in order. Women’s rows, on the other hand, started at the rear of the Mosque and went forward. When boys attended the prayer, they would line up in rows separating men’s and women’s rows.

The Prophet (peace and blessings be upon him) built the Mosque in Rabi` Al Awwal of the first Hijri year (622 A.C.) It was nearly 35-meter-long and 30-meter-wide with an approximately 2.5-m-high ceiling made of palm branches. The columns were made of palm trunks, while the walls were built of adobe bricks.

He (peace and blessings be upon him) made it spacious and opened three doors that were used by both men and women:

– Ar-Rahmah (Mercy) door, which is also called `Atikah’s door (to the west),

– Othman’s door, currently known as Jibril’s door. This is the door through which the Prophet (peace and blessings be upon him) would enter the Mosque (to the east),

– The third door was located at the rear (to the south). At the time, the Qiblah direction was towards Jerusalem. Then, when the Qiblah was shifted to the direction of Ka`bah, in the second Hijri year, the southern door was blocked, while a northern one was opened.[1]

Men and women rows were not separated by buildings, walls or curtains, though this could have been done. Rather, the last of men’s rows was right in front of women’s front row, and this is stated in many Hadiths.

`Urwah ibn Az-Zubair narrated from Asmaa’ that she said:

The Messenger of Allah (peace and blessings be upon him) stood up amongst us and preached to us, mentioning the trial a dead person suffers in the grave. Thereupon the people clamored in a manner that prevented me from hearing the concluding words of the Messenger of Allah. When they calmed down, I asked a man near to me, “May Allah bless you, what did the Messenger (peace and blessings be upon him) say concluding his sermon?” He answered, “It was revealed to me that you would be tested in your graves in a manner almost similar to that of Ad-Dajjal’s trial.“[2]

“It was announced publicly that people should gather for prayer, and then I was among those heading for the Mosque.”

“I was in the front row of women, which was behind the last row of men, when I heard the Prophet (peace and blessings be upon him) say while he was on the pulpit, ‘Indeed, paternal cousins of Tamim Ad-Dary sailed the sea…”[3]

*  Translated from the Arabic original by AboutIslam.net. Sources referenced in the endnotes are the Arabic works, not their English translations.