In this part, Dr. Jasser Auda concludes the series with discussion of where children should line within a mosque and whether women are solely responsible for them during prayer. Also, whether mosque’s gates should be open for both men and women or dedicated for each gender is also elaborated on in this article.

Children’s status and place in mosque

As for children, the observed practice during the lifetime of the Prophet (peace and blessings be upon him) was that the older among them would form separate rows.

Sometimes the imam was a child like `Amr ibn Salamah in the Hadith referred to above. Yet, this practice rarely takes place in our age; few are the children who observe prayers properly with due concentration and Khushu`.

It is thus more suitable that children be accompanied by their parents in mosque or have special halls where they can be taught and guided by volunteering males and females, especially in public occasions where there are big numbers of children.

In fact, to instruct children during the Prayer by adults is one of the Practices of the Prophet (peace and blessings be upon him):

One night I stood to the left of the Prophet (peace and blessings be upon him) in the prayer but he caught hold of me by the hand or by the arm till he made me stand on his right…. [1]

[One day,] the call for Dawn Prayer (iqamah) was announced when I stood to perform two voluntary rak`ahs. So, the Prophet held my hand and remarked: “Are you Praying Dawn four rak`ahs?”[2] 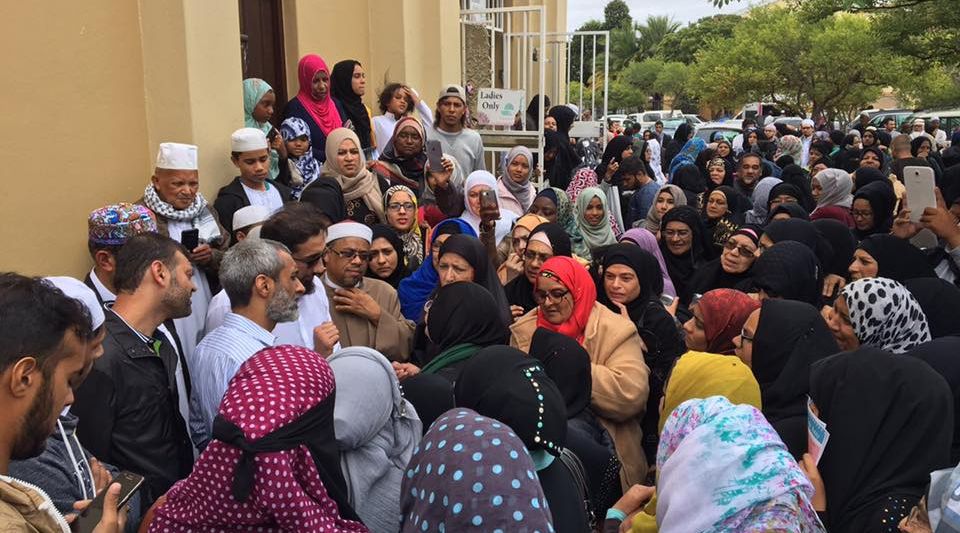 However, some Muslim communities habitually prevent children, especially females, from visiting mosques, though such a practice contradicts the stated Sunnah of the Prophet (peace and blessings be upon him).

– In a chapter titled “Chapter on Carrying a Little Girl on One’s Nick While Praying“, Al-Bukhari reported on the authority of Abu Qatadah Al-Ansari that the Prophet (peace and blessings be upon him) prayed and carried Umamh, [whose parents were] the Prophet’s daughter, Zainab, and Abu Al-`As ibn Rabiah ibn `Abd Shams. When he prostrated, he put her down and when he stood up he picked her up again. [3]

– The Prophet (peace and blessings be upon him) said, I stand up to pray and intend to prolong it; but when I hear the cry of a boy I shorten it for fear that his mother might be distressed. [4]

– Once the Prophet prostrated and one of his grandchildren, Al-Hasan and Al-Hussein, mounted his back. So, he spent long time prostrating. When asked about the reason, he replied, “My son was riding on my back and I did not like to disturb him until he had enough time”

Also, when Al-Hasan and Al-Husain jumped on his back while prostrating in prayer, his Companions wanted to prevent them from doing so; but he signaled them to leave the kids; when he finished the prayer he took them in his lap. [5]

Mosques’ doors for both men and women

Mosques’ doors were accessible to both men and women during the lifetime of the Prophet (peace and blessings be upon him) and during the reign of Abu Bakr.

The issue of assigning a specific door for women is based on an ijtihad (personal reasoning) by `Umar and is meant for organizational purpose; it was not a tawqifi matter (i.e. instructed by a religious text reported from the Prophet, peace and blessings be upon him).

Hence, `Umar’s forbidding men to enter the Mosque through women’s door is just meant for public interest; it is not a binding legal ordinance that applies to all times and places. Besides, it does not revoke the permissibility of having common doors in the Mosque for both men and women.

In this age, and especially in countries with Muslim minorities, it is more proper that the mosques’ main entrances be open for both men and women, even if circumstances necessitated reserving an additional door for women only.

Besides, it is forbidden for men to roughly treat or talk to women if they enter a mosque through “men’s door”, as we unfortunately see in present day reality.

In fact, maltreatment of women in mosques is one of the major problems that the Muslim youths encounter. Such an attitude makes the youth disinclined towards Islam and Muslims, and makes non-Muslims feels aversion from the Muslim message, as witnessed by Muslims living among non-Muslims.

It is not a Sunnah practice to isolate women in specific halls or to place fences or curtains between men and women in mosques.

Rather, the Sunnah is that women pray in the same mosque and the same hall, with women’s rows lined behind men’s rows.

Besides, there is no harm that a woman moves around the mosque when there is no congregational prayer, when men pray individually.

It is not a Sunnah practice that girls or boys be prevented from frequenting mosques or that women alone be responsible for looking after them in mosques.

Moreover, it is permissible to assign a specific sideway door for women, especially in cases of overcrowding, or to draw lines or signs on the ground, separating men’s and women’s praying areas, without preventing women from entering mosques through the main doors.

Muslims should also consider how woman’s status and place in mosques has bearings on new generations of youth, males and females alike, on the image of Islam and on the effectiveness of dawah efforts.

* Translated from the Arabic original by AboutIslam.net. Sources referenced in the end notes are the Arabic works, not their English translations.

[5] As reported from Anas in Az-Zawa’id by Abu Ya`la Al-Mawsili. A similar report is narrated in Al-Bukhari’s and Muslim’s Sahihs

[6] Abu Dawud’s Sunan, 1/348, chapter on separating women from men in the Mosques. Al-Arna’ut said: Ita narrators are trustworthy, though `Abdul Warith – Ibn Sa`id Al-`Anbari – was contested in his attributing the Hadith to the Prophet with [Marfu` narration]. For Isma`il ibn `Ulayyah and Bakir ibn `Abdullah ibn Al-Ashaj reported it from Nafi` ibn `Umar, while the author gave preponderance to judging it as Mawquf Hadith from `Umar. Besides, Ibn Hazm referenced it in Al-Muhalla, 3/131 and Ibn `Abdul Bar in At-Tamhid, 23/397, by way of the author, through this chain of narration. It is also referenced by At-Tabarani in Al-Awsat, 1018. Besides, Al-Bukhari referenced it in At-Tarikh Al-Kabir, 1/60, on the authority of `Umar, who said, “[Men,] Do not enter the Masjids through women’s door”.