One of the current problematic issues in mosques that give access to women is the excessive sensitivity towards, and sometimes the strict banning of, ordinary interaction between men and women. Interestingly, those men and women do interact normally with other men and women in the outer community in all walks of social and professional life.

Referring back to the Sunnah, we find that such interaction between men and women in mosques did exist during the Prophet’s lifetime; it was normal interaction that involved various religious and social affairs.

True, some violations were reported in the Sunnah, but they were limited and viewed as individual cases that required no radical change in the original rulings of interaction, nor in the arrangement of rows in prayer, or even in the architectural design of the Mosque itself.

The following Hadiths are just few examples of how men and women interacted in mosque, in the presence of the Prophet (peace and blessings be upon him), as narrated by male and female Companions. They show what we may call “normal” interaction between men and women in mosque, and they are clear enough to require no further elaboration.

What the Sunnah Says

1. Asma’ (may Allah be pleased with her) recounted: 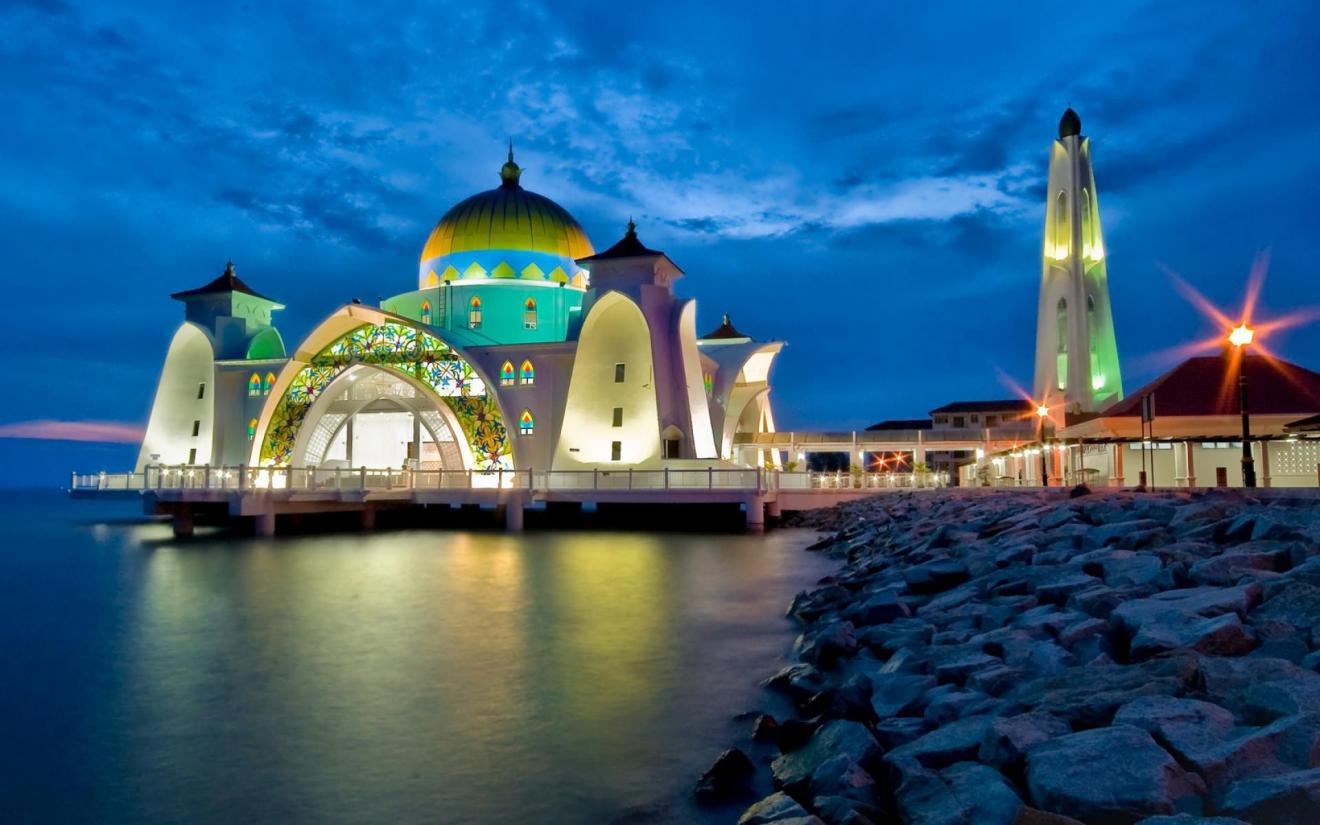 The Messenger of Allah (peace and blessings be upon him) stood up amongst us and preached to us, mentioning the trial a dead person suffers in the grave, and thereupon the people clamored in a manner that prevented me from perceiving the concluding words of the Messenger of Allah. When they calmed down, I asked a man near to me, “May Allah bless you, what did the Messenger (peace and blessings be upon him) say concluding his sermon?” and he answered, “It was revealed to me that you would be tested in your graves in a manner almost similar to that of Ad-Dajjal’s trial.“[1]

2. `Abdul Rahman reported on the authority of Malik from Nafi` from Ibn `Umar that he said, “They (male and female Companions) would perform ablution together”.

I further asked, “(Was it) during the lifetime of the Prophet (peace and blessings be upon him)?”

“Yes,” he affirmed.[2]
3. Jabir (may Allah be pleased with him) reported the following incident:

The Prophet (peace and blessings be upon him) used to stand on a tree trunk when her delivered his sermons. So, a woman from the Ansar said to him,

“O Messenger of Allah! I have a slave carpenter, shall I get him construct a pulpit for you?”

The Prophet (peace and blessings be upon him) responded, “Yes”.

So, the Prophet started using the pulpit, and one Friday, while he was delivering a sermon standing on it, the tree trunk issued a groaning sound like that of a child. The Prophet (peace and blessings be upon him) commented, “Indeed, this (trunk) wept due to what it missed of Dhikr?”[3]

4. Lady `A’ishah (may Allah be pleased with her) said,

“How good the women of Al-Ansar are! Their bashfulness did not stop them from inquiring about religion and acquiring understanding of it”.[4]

5. `Abdullah ibn Mas`ud (may Allah be pleased with him) reported:

(Once) the Prophet (peace and blessings be upon him) entered the Mosque accompanied by some women of Al-Ansar; he admonished and exhorted them, and said, “Anyone of you loses three children will surely enter Paradise“.

A woman – who was one of the most venerated among them – stood up and said, “O Messenger of Allah, and (what about) the woman who loses two (children)?”

The Prophet said, “And the woman who loses two (children shall enter Paradise too)”.[5]

6. Jabir ibn `Abdullah (may Allah be please with him) said:

I attended the `Eid Prayer along with the Messenger of Allah; he started with the prayer, before the sermon, without an Adhan or an Iqamah. Then, he stood up leaning on Bilal, commanded (people to) fear Allah and encouraged obedience to Him. He admonished the men and exhorted them, and then moved towards the women.

When he reached the women place, he admonished and exhorted them and said, “Give out charities, for most of you are the fuel of Hellfire“.

Hence, an ordinary, dark-cheeked woman stood up and asked, “Why is that, O Messenger of Allah?”

He replied, “Because you complain much and show ingratitude to your spouses“.

So, they started giving out their jewelry in charity, throwing their earrings and rings in Bilal’s garment.[6]

7. Asma’ bint Yazid (may Allah be pleased with her) narrated:

One day, the Messenger of Allah talked to us about Ad-Dhajjal (Anti-Christ), and then a woman said,

“O Messenger of Allah, I knead flour for my family and (it is so straining that) I feel about to breathe my last before it turns into a dough [meaning how weak we would be in face of Ad-Dajjal!]”.

“If he comes out while I am amongst you, I would argue with him, and if he comes out after me, then Allah will take care of every Muslim on my behalf“.[7]

8. Abu Hurayrah (may Allah be pleased with him) narrated:

The Messenger of Allah said, “Perhaps a man of you tells what he did with his wife (i.e. regarding their intimacy) and a woman tells others what her husband did with her?“

An African woman stood up and said, “Yes, by Allah, O Messenger of Allah, women do that, and men do that”.

He said, “Do not do that. It is like a male devil meeting a female devil in the road and having intercourse with her whilst the people are watching“.[8]

A Female Doctor in the Prophet’s Mosque

The following Hadith requires scrutiny as it clearly indicates that we, the Muslims, have deviated much from the Sunnah regarding women’s status and role in mosque:

9. It was narrated from Mahmoud ibn Labid that he said: When Sa`d received a wound (of an arrow) in his arm vein, he could hardly move and then he was referred to a woman called Rufaydah, who used to treat the wounded (in the Mosque).

And Sa`d would tell the Prophet how he felt.[9]

A woman won an argument with `Umar

Things remained as such after the lifetime of the Prophet (peace and blessings be upon him); the story of `Umar regarding women’s dowries is well known. According to this story, `Umar ascended the Prophet’s pulpit one day and said to the people,

“Why do you go to excess in women’s dowries though during the lifetime the Prophet, the Companions used to pay 400 dirhams or less in dowry?

If increase in the dowries were a sign of piety or honor in the Sight of Allah, you would have not surpassed them (the Companions; in this regard).

So, let me not hear that a man paid a woman a dowry of more than 400 dirhams”.

He got down the pulpit, and then a woman from Quraysh (described in another narration as flat-nosed, tall woman) intercepted him and said,

“O Commander of the Believers! Do you forbid the people to pay more than 400 dirhams as women’s dowries?”

She replied, “Did you not hear what Allah said in the Qur’an (about it)?”

He wondered, “Which verse (you mean)?”

She answered, “Did you not hear Allah’s saying,

“O Allah, I ask You for pardon! All people are more knowledgeable than `Umar (referring to himself; another narration reads that he said, ‘A woman was right while a man (`Umar) erred’).[10]

The practice of pitching tents in mosques for `Itikaf and for other social purposes continued; Abdullah ibn Az-Zubayr pitched a tent where some women tended the wounded and fed the hungry, as is recorded in history books.

[1] Al-Bukhari’s Sahih, chapter on Funerals, 479/3, till the word “clamored”, and then An-Nasa’y narrated the rest in his Musnad, 200/7, through the chain reported by Al-Bukhari.

[2] See Malik’s Al-Muwatta’, 24/1, and Ahmad’s Musnad, 103/2, and the report includes “And they would start it (ablution) together”. See also An-Nasa’i’s Sunan, chapter on purification, section on men and women performing ablution together, 57/1, and Ibn Khuzaymah’s Sahih, 63/1.