This book will have you prepared for your first visit so you will feel confident in your steps and able to focus on the One that deserves our focus, Allah.
aaa

When I volunteered to review the book, I was mostly excited to see what the book was about. The writing of the review was an afterthought.

See, I work in publishing and read articles about Islam and Muslims daily. Multiple times daily! So once I got the book, I began to think…”what did I just get myself into?”

I had just finished an 8 hour shift, was exhausted and wanted to zone out on some TV. My Kindle caught my eye and I remembered I needed to start reading a ‘handbook’ for new Muslims. Oy vey!

I fired up the Kindle, poured a cup of coffee and sunk into my comfy chair. By the time I finished their introduction, I knew this wasn’t like any other Islamic book I’ve ever read.

The first thing you will notice is that it’s not written by Islamic scholars. The book has a very relaxed, approachable style of writing that makes the reader want to know more.

Both of the authors are American converts, they share funny, embarrassing and heartbreaking stories throughout the book that many of us can relate to.

As a Muslim convert myself, I know what’s it like to excitedly embrace Islam, and shortly after, feel many of the feelings that are described in this book.

But in between their personal stories, is solid Islamic knowledge. The basics of Islam put in terms that are easy-to-read especially for the Westerner. 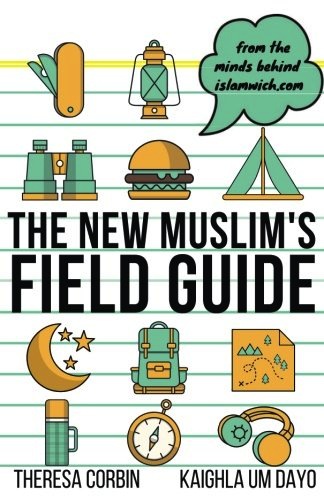 One thing that resonates throughout the book is the need to maintain your own person. How being Muslim isn’t about being Arab, Indian, or any other ethnicity.

They explain how Islam was sent for all of mankind and how many of us converts believe that when we embrace Islam, that we are embracing a different culture. Whether that means changing our names (not necessary), wearing abayas or using Arabic terms.

Speaking about Arabic terms, one of my favorite features of this handy guide is their glossary. Learn what masha’Allah, Aqueeda, Istikhara and many other terms that you might have read about often but never really knew what they meant. I spent a good amount of time relishing in this beautiful glossary and realizing that some of the words that I’ve been using for 5 years, I’ve been using wrong.

The sisters did a great job explaining the basic beliefs of a Muslim including the 5 pillars of Islam, how to pray and the importance of it, what is Ramadan, Muslim manners and how to tell your non-Muslim family that you converted to a religion that they may not agree with. They even give you a handy little script that you can use.

They understand concerns that many of us converts living in a non-Muslim country feel. Praying outside of our home, wearing hijab in public, Islamophobia, and relationships with the opposite sex.

They explain these topics based strictly on the Holy Quran and the Sunnah of Prophet Muhammad (peace be upon him) without any culture mixed in. It’s refreshing and leaves you feeling confident to step out into the world as a Muslim.

One of the scariest things, as a new Muslim, is visiting the masjid for the first time. I wish I had read this book before going as this would have saved me some embarrassment.

Theresa shares her embarrassing masjid story that involves her not wanting to remove her shoes the first time she went due to her stinky feet. After reading this, I realized that most new Muslims have a ‘first-time going to the masjid’ horror story. I certainly have mine but that’s another story for another day.

This book will have you prepared for your first visit so you will feel confident in your steps and able to focus on the One that deserves our focus, Allah.

Also, discover whether it’s best to marry a ‘heritage’ Muslim or a convert like yourself, how soon after converting should you get married, what’s a marriage contract and how to write one, and the rights and responsibilities of a Muslim husband and wife.

I was pleasantly surprised of the wealth of information this guide had. The way they delivered the information made me feel like I was sitting with my dearest friend, drinking coffee as she explained the ins and out of Islam.

In my humble opinion, this book needs to be distributed to mosques in all Western countries and when someone comes in and asks about Islam, they are handed a Quran (or a translation), a book of the life of Prophet Muhammad (PBUH), and a copy of this book.

With this information, they will have all they need to make the most important decision in their life, if they consider accepting Islam into their life.

I recommend this book to all new Muslims. I’ve been a Muslim for 5 years and I found joy, knowledge and benefited from it.

I’m quite thankful to both of my sisters in Islam, Theresa and Kaighla for the obvious hard work they poured into this and allowing me to read it. Jazak Allah Khairan (learn what that means in their awesome glossary).