Raised as a Muslim in a non-Muslim country, my late father instilled in us the significance of supplication.

This was very important for me, especially facing challenges of a practicing Muslim and for a youngster raised in what were relatively conservative ways, the supplications served as some sort of sanctuary.

Many times he prayed for my siblings and I to make decent friends highlighting the value of good company away from loneliness; hence at an early age I was taught by my parents the value of friends, in turn passing my experiences on to my children.

Many years later, I have learned that isolation for some is scary, and it’s not easy to face confrontations and tests when being alone. However making suitable friends helps making our journey and decisions in life somewhat easier.

Befriend Who Leads You to God’s Path

One such journey for some is the decision to convert or revert to Islam. Despite being one of the easiest steps, it undoubtedly spells a difficult journey ahead for converts who stay on their own and avoid the community. Unfortunately these are the most likely ones to lose their way.

I read once that strength comes in numbers; hence the continued call for travelling this journey with friends who may guide you when you falter and who may in turn feel secure with your companionship.

Picture being lost in the forest, where we come across a path crowded with people. Wouldn’t we feel safer to join in and follow along as opposed to hanging back, or walking on our own, where we might get lost going down an alternative route and in due course off the ‘straight path’? 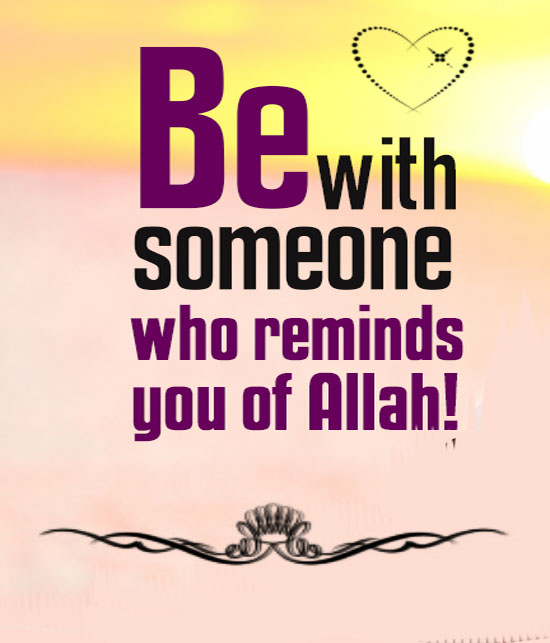 During these trying times and regardless of where we are, Islam is not a religion to be practiced in seclusion or isolation; in short it demands community and friends who will make our journey throughout this life into the next an enjoyable and uncomplicated one. The Prophet Muhammad in fact emphasized that there will be a time when following his ways will in itself be a trial. He said:

“There will come a time when holding onto your faith will be like holding a piece of hot coal.” (At-Tirmidhi)

Be a Model of a Good Friend

While making new friends after reverting can be intimidating, it is definitely rewarding. After all, these friends will form a big part of our life. They are the ones who will walk through our life together, sharing our ups and downs and joys and pains.

These friends will be the ones we can talk about anything and everything with. We may or may not meet up every day, but it does not matter, since the strength of our friendship is not determined by how frequently we meet up but rather the common ground we share. These are the friends who can be trusted to be there for us whenever we need them, and they will go the extra mile for us.

We learnt from Prophet Muhammad that following his move to Madinah from Makkah, he spent the initial months establishing friendship and brotherhood demonstrating that it is an important aspect of our life and, as Muslims, integrating with the community is similarly important.

These Muslim communities can be a means of support for new Muslims who have unfortunately often become isolated from family members, and a means of constant companionship. This friendship in fact can be viewed by others who observe your moves without you even noticing. In fact you can even be a teacher of Islam just by practicing being a ‘good friend’.

How to Choose Good Muslim Friends

While we, as Muslims, know all our actions are recorded, it was complimenting to hear that the self discipline of Muslims won the commendation of an observer who said she seriously thought of joining me during my next fast praising my Muslim ethics which honored friends without judging.

The Prophet was reportedly asked:

“Which of our companions are best?”

One whose appearance reminds you of God, and whose speech increases you in knowledge, and whose actions remind you of the hereafter. (An-Nasa’i)

It is on this note that I stress that although both born and new Muslims’ level of faith goes up and down throughout our life, what will definitely keep someone from straying away from Islam is support from other Muslims, and guidance that we wouldn’t have access to on our own.

We should take any chances to connect with each other and cultivate relationships, and look for classes and seminars which offer knowledge and guidance in new terrain of course following the Prophet’s advice throughout the process and limiting ourselves to as little male/female intermingling as possible.

While finding new friends is difficult, it is not impossible. We need close, long-term relationships; and we need to be able to confide in others; we need to belong; we need to get and give support. In fact studies reveal that if we have five or more friends with whom to discuss an important matter we are far more likely to describe ourselves as ‘very happy’.

Making good Muslim friends adds a special meaning to life since they help us enjoy the good times and overcome the difficult ones. These friends will improve our mood in turn helping us reach our goals of becoming better, decent, God fearing, practicing Muslims. Prophet Muhammad teaches:

The example of the believers, in their mutual love and mercy for one another is like the example of one body, if one part feels pain, then all of the body suffers in sleeplessness and fever. (Muslim)

In short we must seek companions who are seeking paradise in the Hereafter. Just as they say – You are what you eat, the same applies to the proverb:

“Tell me who your friends are and I’ll tell you who you are.”

Remember Islam is a journey that doesn’t need to be made alone especially as friendship and companionship are highly regarded in our religion. We should surround ourselves with friends who are models of something instead of experts of nothing, for if we share our problems with someone who is incapable of contributing to a solution dipping in their own life’s experiences, our time and energy is wasted.

Keep in mind that a good friend is one who accommodates our faults but corrects them where possible and who will always love and forgive us for the sake of God.

(From Discovering Islam’s archive.)
We use cookies on our website to give you the most relevant experience by remembering your preferences and repeat visits. By clicking “Accept”, you consent to the use of ALL the cookies.
Do not sell my personal information.
Cookie settingsACCEPT
Manage consent