You walk on it, your body touches it every day, its supports your life on this planet, it allows you to build a shelter for yourself in the form of cities and it facilitates for you planting your food, this is the Soil; the mixture of minerals, organic matter, gases, liquids, and organisms’ myriad which you daily deal with unconsciously.

It’s estimated that healthy soils are the key to feeding nine billion people by 2050. Soil plays a major role in storing drinkable water for humanity and all other living organisms.

There are two branches of science that study soil exclusively, Edaphology and Pedology. Soil on Earth is not of a single kind, actually there are several categorizations for soil types and they differ in many properties and characteristics.

The Food and Agriculture Organization of the United Nations (FAO) in addition to the Soil Science Society of America (SSSA) coordinate with the Global Soil Partnership and other organizations around the world to raise awareness and promote the sustainability of our limited soil resources.

Soils are a finite natural resource and are nonrenewable on a human time scale. Soils are the foundation for food, animal feed, fuel and natural fiber production, the supply of clean water, nutrient cycling and a range of ecosystem functions.

The area of fertile soils covering the world’s surface is limited and increasingly subject to degradation, poor management and loss to urbanization.

Fertile soils was one of the major factors in starting the first civilizations of humanity in the inspiring and hard working societies of Ancient Egypt, Mesopotamia, Ancient China and the Indus Valley.

Let’s have a look on our soil through the following colorful infographic: 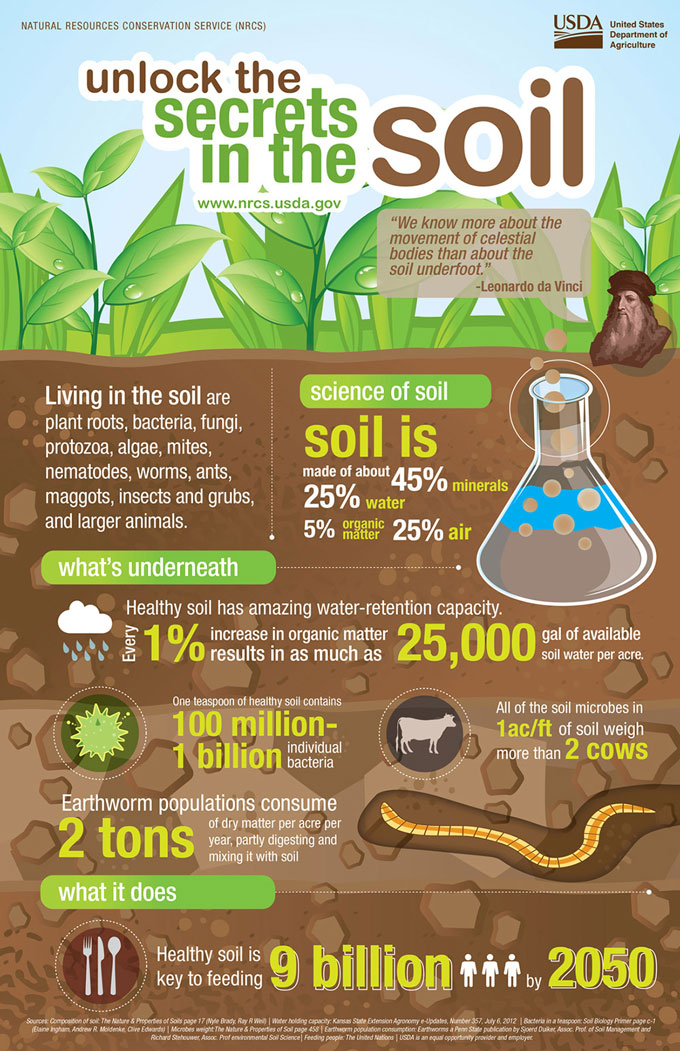