Elba Mountin, Egypt | Elba Protectorate is considered by taxonomists, botanists and ecologists to be the northernmost Afrotropical ecozone on Planet Earth.
aaa

Have you ever heard of Egypt’s largest natural woodland? It’s Elba Protectorate. This is the largest natural protected area in Egypt, out of her officially declared 29 protectorates so far; it encompasses an area of 35,600 km2 (3,560,000 hectares) at the farthest south east of Egypt.

Elba Protectorate is considered by taxonomists, botanists and ecologists to be the northernmost Afrotropical ecozone on Planet Earth, being located between the latitudes 23.3°N and 22°N in the north hemisphere.

The region was officially declared a national park by the Egyptian government in 1985, and since then it has been managed by the Egyptian Environmental Affairs Agency (EEAA) and is administratively part of Abu Ramad City at the southernmost east of Egypt.

The most famous Gebel Elba, although not being the highest mountain in the protectorate -just 1,437 m-, yet the entire natural reserve is named after it.

Other high peaks in the region include the 1,911 m- Shendib Mountain, Shendodai Mountain (1,526 m) and Shellal Mountain of 1,409 meters above sea level.

The entire natural protectorate also records the highest rainfalls precipitation in Egypt, even more than the Egyptian western Mediterranean coast. That’s because the Red Sea is just 15 km away from the core of the mountain ranges complex and because of the east-twisted shoreline, giving more plain space for the moist air to be pushed upwards by winds to the tops of the mountains.

In addition to the cluster of coastal mountains, the protectorate is an extensive and complex natural reserve comprising a number of ecosystems; for instance:  the mangroves of the Red Sea, the 22 islands, coral reefs, coastal sand dunes, coastal salt marshes and coastal arid plains.

With some 458 plant species, which  account for almost between 14% – 25% of all plant species recorded for Egypt and a diverse fauna, zoologists and ornithologists consider Elba Mountain specifically as a biodiversity hotspot, with a biological diversity unparalleled in all Egypt’s other North African, Mediterranean, Turani, and arid terrestrial environments and ecosystems.

Elba Protectorate has a green cover of Acacias, Delonix, Balanites aegyptiaca and other scrubs. There is at least one endemic species of “Biscutella elbensis” plant. Dracaena ombet and Moringa are from the plants which grow there at high elevations there.

Beside flora, Elba Protectorate is home for 30 species of reptiles, one for amphibians and 23 mammal species such as: Vulpes rueppelli, rare Panthera pardus, Gazella dorcas, Capra nubiana and Ammotragus lervia, in addition to 173 avian species, 31 of which are found in Wadi Aideib (Aideib Valley).

Elba Protectorate is close to the villages of Ras Hadarba and Adledib, in addition to Halayeb and Abraq towns, as well as Abu Ramad City, and the current capital of the region which is Shalatin city, in addition to the major historic city of Berenice.

The region, which was always used by the ancient Egyptians as a wealthy province of gold mining and extracting precious minerals, was part of Egypt since the old kingdom and the 1stEgyptian dynasty at least.

Starting from the 18th Egyptian dynasty, the ancient Egyptian imperial army used the local indigenous Beja tribes as mercenaries and guards for Egypt’s south borders which stretched during the imperial age from Taurus Mountains, Mersin Turkish province and the Greek Aegean Islands like Rhodes in the north, to Djibouti in the south and from the Libyan Gulf of Sidra in the west to western Iraq in the east. 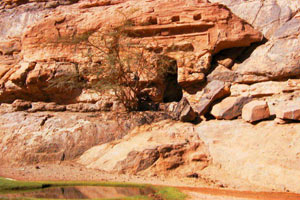 This is majorly evidenced in the continental mountainous town of Abraq which has a rich history of pre-historic paintings and pre-dynastic artifacts made by Proto-Egyptians. Dynastic Pharaohnic monuments decorated with ancient Egyptian hieroglyphics have been excavated in Abu Sa’fa Valley inside Abraq. Additionally, several ruins of Roman fortresses and castles could be visited atop Mount Abraq and Mount ‘arqa.

Numerous species of Elba Protectorate’s flora and herbs are of notable medical values. Some of the plants and trees there are good sources of biofuels and clean coal, while others could be useful for timber. Furthermore, some species are used for extracting their oil, as well as for human diet.

Good and wise usage of such herbs and medicinal flora could minimize Egypt’s imports of chemical and natural ingredients which come from India and South Asia for medicine manufacturing.

Taking this into consideration, Egypt could become a notable phytotherapy hub between three continents and a major centre for studies of the use of extracts from natural origin like health-promoting agents.

The region is well-known since the ancient Egyptian times for its gold mines and gemstones in addition to other metals. In the modern age, geologists discovered precipitates of uranium and little reserves of the rare precious metal “Platinum”.  In addition to that, refining companies have discovered that the region is also rich in natural gas and a number of oil fields.

All this wealth and natural resources make the region an Egyptian powerhouse and a fossil fuel stronghold for Egypt which seeks development and improvement in the light of the 25th of January Revolution. 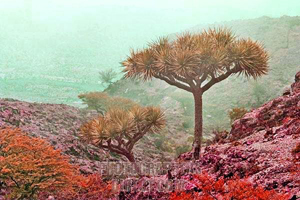 Numerous species of Elba Protectorate’s flora and herbs are of notable medical values. Some of the plants and trees there are good sources of biofuels and clean coal, while others could be useful for timber.