In 2005, World Health Organisation (WHO) estimated that three million people died worldwide due to Chronic Obstructive Pulmonary Disease (COPD) and this represented a 5% of all deaths per year globally.

Since then, no official annual estimates have been released by the body although experts say the statistics might be gory.

Key among the causes of COPD is cigarettes smoking. To reduce the number of COPD cases, several countries have drafted stringent laws that govern smokers. These laws are aimed at discouraging people from stopping to smoke. Such laws have led to the formation of smoking zones where smokers are supposed to go.

It’s predicted by the WHO that in 2030, COPD will be the third leading cause of death worldwide. COPD is a lung ailment that is noticed as a result of persistent blockage of airflow from the lungs.

Instead of using modern methods of cooking such as gas cooker, they resort to use firewood, which is thought to emit more deadly smoke.

Dr. Francis Wafula of a private hospital says those hailing from poor families are always the victims of the disease. “They use firewood when cooking. But then that does not exclude those is upper social class who use cigarettes. Cigarettes give out smoke which eventually goes to the lungs,” he says.

It is estimated (2004 data) that more than 64 million people have the disease. Experts say the disease is rampant in low and middle income countries and containing it has been a difficult task due to poor policies.

However, in the recent past, the world has made great strides in combating the disease. Still, there is a lot to be done like knowing exactly the extent of the disease.

How WHO is Tackling the Problem

According to WHO, a number of activities are being undertaken to tame the disease. Key among those activities is the launch of Global Alliance against Chronic Respiratory Diseases (GARD).

“This is a voluntary alliance of national and international organizations, institutions and agencies from a range of countries working towards a common goal of improving global lung health. Its vision is a world where all people breathe freely. GARD promotes an integrated approach that capitalizes upon synergies of chronic respiratory diseases with other chronic diseases. GARD focuses specifically on the needs of low and middle income countries and vulnerable populations. The Global Initiative for Chronic Obstructive Pulmonary Disease (GOLD) is part of GARD,” a statement from WHO says.

Besides GARD, WHO has a Programme on Indoor Air Pollution. WHO, as the global public health agency, collects and evaluates the evidence for the impact of household energy on health and for the effectiveness of interventions in reducing the health burden on children, women and other vulnerable groups.

Experts say indoor air pollution is brought about by use of fire woods or traditional stoves which emit high levels of smoke. This kind of smoke contains Carbon Monoxide which is known to be having damaging effects.

How We Face the Killer 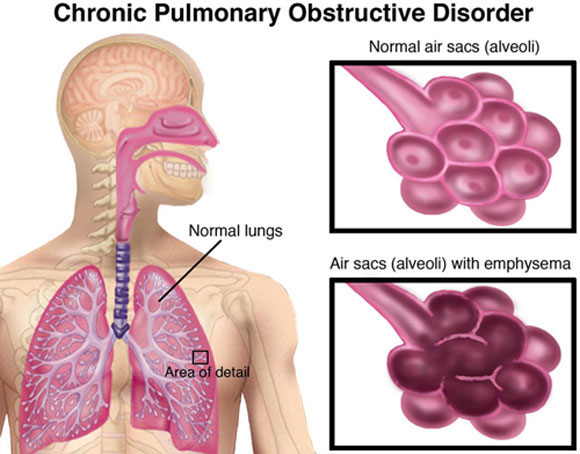 In Kenya for example, the government introduced stringent Tobacco Control Act in 2007 that made it illegal for smokers to puff anywhere. The government then designated what is now commonly known as ‘smoking zones’ where smokers could go and do their business.

The punitive laws were aimed at encouraging people to quit smoking since tobacco, according to statistics claimed more than 12,000 people annually.

Nakuru was the first town to implement the law amid public outcry although it is now a norm before it rolled out to other towns eventually to the whole country.

Scientists also had warned that exposure to second hand smoke was also leading cause of respiratory complications. “You see, you might not be smoking but when one near you smokes and you inhale the smoke, then you have as well smoked,” Wafula says.

The law has since greatly reduced the effects of secondhand smoke. WHO has developed four components that are critical in managing the disease. These include managing stable COPD, reduce risk factors, asses and monitor disease, and manage exacerbations.

“These goals should be reached with a minimum of side effects from treatment, a particular challenge in patients with COPD where comorbidities are common. The extent to which these goals can be realized varies with each individual, and some treatments will produce benefits in more than one area,” information from WHO states.