‘This is my section,’ said my nephew while he made an invisible line with his finger ‘…and that’s yours,’ as he pointed to ‘my side’ of the bed.

‘Ok, darling. I will try my best to only sleep on my side and not come into yours.’ I said as I kissed him goodnight.

His my-side-your-side invisible border reminded me of an email I received sometime ago about Oceanography, a study of earth’s ocean and sea.

The Barrier between the Two Waters

In the email, it was said that in the southern part of Cape Town, South Africa, we could see two different rivers flowing together where one river is sweet and the other is salty.

So, what is so special about them? These rivers were flowing together all the way to the ocean and miraculously; the two rivers did not even mix! They continue to flow in that same state until both reached the sea. And we could still see from the sea the two different distinct characteristics of the two river!

About fourteen hundred years ago, a verse was revealed to our beloved Prophet Muhammad (peace be upon him). Allah has said:

Is not He (better than your gods) Who has made the earth as a fixed abode, and has placed rivers in its midst, and has placed firm mountains therein, and has set a barrier between the two seas (of salt and sweet water). Is there any god with Allah? Nay, but most of them know not. (Quran 27: 61)

Allah has said that He has created two seas which are situated side by side, next to one another, but they do not mix as He has set a barrier between them.

SubhanAllah, this is amazing, right?

Just look at the images below to get a better picture what I mean. 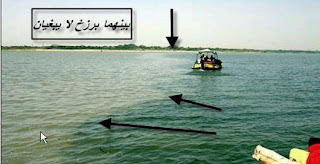 As I amazed myself with those beautiful images, I suddenly thought of a wish.
A wish that we human being, said to be the best of creations, could learn from the sea barrier one lesson in life: lesson of respecting others’ uniqueness.

Just look at how they ‘respected’ the boundaries that set them apart from one another, to each is their own unique characteristics. Still, they are able to move towards the ocean side by side, together, harmoniously!

As what Jackie Robinson said:

I’m not concerned with your liking or disliking me . . . All I ask is that you respect me as a human being.

She was right, don’t you think?

You don’t have to like me, you don’t even have to love me, but, the least you could do is to learn to respect me as a human being that has equal right as you have to live in this beautiful world. I was born here too, you know, just like you…

I wondered, why couldn’t we live that way? With mutual respect for one another’s identity and uniqueness; without forcing the other person to change and take after the characteristics we have? Why do I have to be like you in order to be accepted? Do you like it if I demanded that you become like me, so that I could accept you?

Why couldn’t we let people just wear what they prefer to wear? Be it covering their hair, their faces and their bodies? Why do we have no respect for the preferences of another being?

I still am confused of why couldn’t people simply celebrate the joy others have when eating their uncooked fish, or spicy curry, or hot chilly dish, or burger and chips, or their ‘upside-down’ dish; without thinking oddly of them?

Let us ask ourselves, did the sweet water look down on salt water, thinking it is better and worthier to rule the river? No, definitely, not, right? Why? Because sweet water knew very well that it needed to work together with the delicious salt water to make it to the ocean! Side by side…

The two seas have shown us that if we could respect one another’s distinctiveness and uniqueness, we could all flow together and be at somewhere, some place greater the sum of us- the ocean!