If Allah did not put the law of not mixing up between these two waters, the fresh water rivers on earth would mix up with the salty sea water and the living creatures in them and in their environments would be annihilated all together.
aaa

This video was transcribed by Reading Islam Team.

{He has let free the two bodies of flowing water meeting together between them is a barrier which don’t transgress.} (Quran 55: 19-20)

The expression of the verse has a mind-blowing style. For, the verse informs us that the seas do not mingle with one another despite all storms and huge waves.

Yes, science confirms the verses of the Quran as it always has been and proves that it is the word of Allah. It is as follows:

The French marine scientist Captain Jacques Cousteau, who is famous for underwater research, explains the results of his investigations about water barriers as follows:

“We were investigating of some researcher’s judgments that put forth that there were some barriers that separated different masses of the seas from each other. As a result of various studies, we saw that the Mediterranean Sea has a peculiar natural level of salinity and density. At the same time, it has specific life forms.

Then, we analyzed the mass of water in the Atlantic Ocean and saw that it was completely different than the Mediterranean Sea. However, these two seas, which merge at the strait of Gibraltar, were supposed to be equal or at least near to equal in terms of salinity, density and life forms that they had. 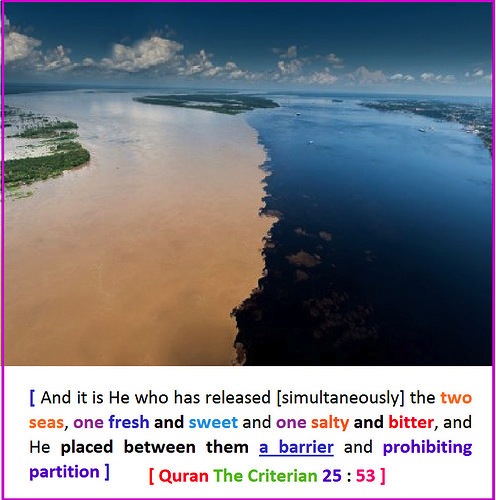 However, these two seas have different structures even in places where they converge closely. Upon our investigations, we came across with an event that amazed us. or, there was a great water curtain at the merging point that did not allow these two seas to mix up.

The same kind water barrier was founded by German scientists at Bab al-Mandab, where waters of Gulf of Aden and Red sea converge in 1962. In our later investigations, we witnessed the existence of the same kind of barrier in all merging points of seas that have different characteristics.”

This amazing fact, which amazed Captain Cousteau, about the waters that do not mix up though seas converge is explained with the following verse in the Quran fourteen centuries ago:

{He has let free the two bodies of flowing water, meeting together. Between them is a Barrier which they do not transgress.} (Quran 55: 19-20)

Another kind of water barrier on earth is seen at bays and deltas where the fresh water rivers flow into the seas. Rivers that have the utmost possibility of mixing into one another because of their surface and bottom currents never mix up with salty water in places where they fall into seas.

If Allah did not put the law of not mixing up between these two waters, the fresh water rivers on earth would mix up with the salty sea water and the living creatures in them and in their environments would be annihilated all together.

The Quran attracts attention to the miracle of this not mixing of these fresh and salty waters in another verse as follows:

{It is He Who has let free the two bodies of flowing water: one palatable and sweet and the other salt and bitter; yet has He made a barrier between them, a partition that is forbidden to be passed.} (Quran 25: 53)

It is impossible for a man to discover and write a truth that science has discovered only in this age on his own fourteen centuries ago.

Therefore, the Quran cannot be the word of man. It is the pre-eternal word of Allah, who is the creator of lands and skies.