Love is more than a simple liking for a person, a thing, or an experience. It is more meaningful and potent than that. Love is a mighty force of existence.
aaa

Life is all about relationships. Man is created as a social being inclined towards knowing and forging bonds and friendships with others. Hence, the Arabic word “insan”, which means “human being, person and man”, is derived from the verb “anisa” which means to be “affable”, “sociable” and “friendly”.

Moreover, man is created as Allah’s vicegerent on earth. As such, every animate and inanimate creation has been subjected to him and his services in order to facilitate the execution of his noble terrestrial mission.

Man thus naturally forms amiable and productive relationships with his surroundings. In fact, the quality of his stay on earth, as well as the implementation of his vicegerency mission, depends exclusively on the quality of the relationships in question. That also is the only valid measure of the quality — or otherwise — of his cultural and civilizational legacies.

As a result, man develops a variety of feelings, states and attitudes towards things and beings. They range from personal attachments to strong attractions, and from interpersonal affections to outright pleasures.

Such feelings, states and attitudes can likewise morph into a virtue, signifying kindness and compassion, which, in turn, translate itself into a wide range of behavioral patterns towards fellow humans, animals and nature.

It is here that true love begins.

Love is more than a simple liking for a person, a thing, or an experience. It is more meaningful and potent than that. Love is a mighty force of existence. It is a powerful expression of positive sentiment towards everyone and everything that helps a person comprehend and value the true meaning of his self and life as a whole.

Love is about discovering, appreciating and living the truth which is manifest in every being and experience, and as much in the grandest as in the smallest. It, therefore, is an endless and extremely dynamic process. It is never a finished product.

It is thus rightly said that love is infinite and free. It is neither a substance nor a commodity that can be bought or sold. Love cannot be made, engineered, legislated, imported, controlled or inherited. Love as a concept and existential reality, plus the ability to love and the privilege to be loved, denote some of the supreme divine gifts granted to man. The gifts, however, must be duly valued, cherished, cultivated and kept pure and unadulterated at all times.

Love should be at once given and received. Just loving, without receiving and feeling love, is an imperfect and wanting condition. Whereas receiving love and feeling it, without actually loving in return, is selfish and so aberrant a state that it easily can debilitate the whole love prospect.

Before loving, a person ought to discover and know himself as a source of love first. He should love himself first, so to speak. Only then will he be able to truly love (understand and value) others. Love and the truth are almost synonymous. They are certainly inseparable, seeking out and complementing one another. 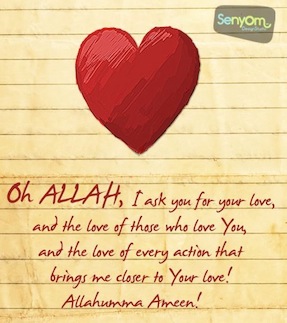 It is perhaps owing to this that in Arabic, the word love is called “hubb”, which is derived from the same root as another word, “habb”, which means “seed(s)”. The message implied thereby is that the seeds of love are planted in every human being the moment they are born.

As they grow, humans ought to take care of and nurture the seeds of love, allowing them to grow as well. And as humans mature physically, intellectually and spiritually, their love should correspondingly mature, clearly manifesting and proving itself throughout people’s entire life endeavors.

Humans, it follows, are born to love. They are created but to become loving beings. Hate, on the other hand, is an alien thing to man. Man can only go against his inherent self and learn to hate. To love and become a loving person is a normality. To hate and become a hating person is an anomaly.

It is on account of this that in Arabic, the words “to hate” (kariha) and “hatred” (kurh and karahiyyah) are derived from the same root as the words “akraha” and “ikrah” which mean “to force or compel” and “compulsion” respectively. The message meant to be thus communicated is that to become a hating person, one must go against his innate self, and force upon it that which is incompatible with its heavenly disposition and character. Indeed, such is one of the greatest acts of injustice a person can perpetrate against the self.

According to the Islamic worldview of tawhid (Allah’s Oneness), life is all about love, along with unearthing and living its remarkable meanings and great potentials. Almighty Allah is All-Loving and Most-Loving. All the forms and intensities of love in the whole web of existence are due to Him being the Loving God, Master and Sustainer, Who incessantly bestows His infinite love on His creation.

The Prophet once said that:

On the Day of Resurrection, every person will be with him whom he loves (Sahih al-Bukhari).

He also said that:

Love for something is so dominant that it blinds and deafens (Sunan Abi Dawud).

It goes without saying that being a true Muslim means to love and be loved. The whole life is but a love affair, both in the physical and metaphysical spheres. Once they set out on an ontological journey of experiencing and enjoying the truth – sensing and identifying themselves at the very core of it – true believers never stop exuberantly exhibiting, yet intensifying, that extraordinary sentiment and feeling called love. They do so for whoever and whatever is in a position either to endorse or add an extra sense, meaning, bliss or impetus to what they honorably live for.

The truest manifestation of love in a person is that he identifies himself with a higher transcendent cause and its unity of purpose and design, unreservedly championing their incalculable means, ways and expressions. This is so because the truth and its ways are boundless and inexhaustible. Boundless and inexhaustible should also be people’s love for them.

Given that love is everlasting and divine, neither transient nor evil things can be genuinely loved. Nor can love be intermittent, in the sense that a person, or a thing, is loved at one time, but disliked, or even loathed, at another.

Love must be inexhaustible, continuous and growing. It is not bound by time and space, rigid conditions, stipulations and codes. It culminates in loving Allah with our everything: our heart, mind and soul. This is followed by loving the Prophet (peace be upon him) and the truth in its totality. Everyone and everything else should be adored and loved proportionately only to the extent of their affiliation with the former, which enfolds every value and means everything in both worlds to a believer.

But to each and every true Muslim, there is nothing more important and more favored than Almighty Allah, the Prophet and the ceaseless struggle on the path of the truth. Everything else comes second, directly or indirectly leading, and at the same time playing second fiddle, to the former. Loving them is conditioned by the manner and strength of their relationships with the former.

Thus, neither lusts, sensual self-indulgence and greed, nor mere friendships, acquaintances and superficial affections, will ever be qualified as love. In this very context, certain forms of hate – such as hating outright evil and immoral acts or schemes – are, in reality, unmistaken manifestations, or impulses, of true love.

No one of you truly believes until I am dearer to him than his father, his son, his own self and all the people (Sahih al-Bukhari).

If anyone possesses three qualities, he will experience the sweetness of faith: That Allah and His Messenger are dearer to him than anything else, that he loves another person solely for Allah’s sake, and that he hates lapsing into unbelief as much as he would hate being cast into the fire (Sahih al-Bukhari; Sahih Muslim).