Criticism can be tough to deal with for even the most humble of people, particularly if it is unfair or lacking in tact. Like a knife, it often causes deep, festering wounds and divides the closest of friends.

The Prophet Muhammad (peace be upon him), however, was exemplary in his ability not only to accept criticism humbly, but moreover, to use it to achieve positive results.

With the Jewish Rabbi

One day, a Jewish rabbi, Zaid ibn Sun’ah, came to demand the payment of a debt that the Prophet owed him. He violently pulled the Prophet’s cloak from his shoulder and addressed him rudely, saying:

“You, son of Abdul-Muttalib, are dilly-dallying.”

Umar ibn Al-Khattab, one of the Prophet’s Companions, was incensed by this and  reproached Zaid saying:

“O Enemy of Allah, do you talk to the Messenger of Allah and behave towards him in this manner?! By the One who sent him with the truth, had it not been for the fear of missing Paradise, I would have beheaded you with my sword!”

The Prophet, however, kept smiling and said to Umar:

This man is entitled to better treatment from you. You ought to have advised me to repay the loan promptly and asked him to make his demand politely.

Then, turning to Zaid, the Prophet said:

There are still three days before the appointed time for repayment.

At the same time, he asked Umar to repay the loan and give Zaid 20 measures in excess of that which was owed to compensate for his threatening attitude towards Zaid.

Read: Basic Social Manners – What Would Muhammad Do?

In this incident, the Prophet Muhammad showed no defensiveness. In fact, it was known about him that he would never become angry for his own sake; rather he would only become angry for the sake of Allah if one of Allah’s limits had been transgressed.

The Prophet never took revenge for himself unless the honor of Allah was violated. Then he would take revenge for the sake of Allah. (Al-Bukhari)

By not allowing the issue to become personal, he was able to rationally evaluate the criticism  and  affirm his responsibility for paying back the debt in a timely manner.

Even though he was not late in paying back the debt, his reaction not only resolved the issue, but it also achieved a result that would have never been achieved, had he reacted defensively.

With a Group of the Ansar

In another incident, after a battle, the Prophet started distributing the booty among the people. The first to receive booty and the ones who obtained the greatest number of shares were the people who had recently embraced Islam.

As soon as he had given the new converts, Prophet Muhammad ordered Zaid ibn Thabit to fetch the booty and summon people. Then he designated the shares that would be given to the people.

This distribution was carried out according to a wise policy. However, not everyone recognized and appreciated this. Some of the people of Madinah started objecting to the shares they were allotted.

The complaints began to take the form of accusations until Saad ibn Ubadah went to the Prophet and said:

“O Messenger of Allah, this group of the Ansar (the people of Madinah) are upset regarding the distribution of the booty. You have allotted shares to your own kinsmen and given many gifts to the Arab tribes, leaving the Ansar with nothing.”

O Saad, what do you think?

“O Messenger of Allah, you know that I am just a member of this group.”

The Prophet said to him:

Bring your people to me.

At this point, one might have expected the Prophet to reproach them for having doubted his justice in distributing the booty, or to chastise them for their bad assumptions about him. Instead, when the people had gathered, Prophet Muhammad faced them and he thanked and praised Allah. Then he said to them:

I have been told that you are angry with me. Didn’t I come to you when you were astray and Allah guided you? You were poor and Allah gave you wealth. Weren’t you foes and Allah made you love one another?

“Yes,” they answered, “Allah and His Messenger are better and more gracious.”

“What prevents you from replying to the Messenger of Allah, O Ansar?”

“What should be the reply, O Messenger of Allah, while to the Lord and to his Messenger belong all benevolence and grace.” 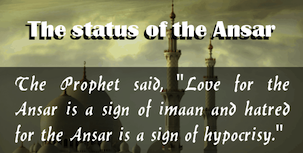 By Allah, I would have testified to the truth of your answer if you had answered: ‘You came to us belied and rejected and we accepted you; you came to us in a state of helplessness and we helped you; a fugitive, and we took you in; poor and we comforted you.’

O people of Al-Ansar, do you feel desirous for the things of this world by which I have sought to incline these people unto the Faith in which you are already established?

Are you not satisfied, O people of Al-Ansar that the people will leave with ewes and camels, while you will go back with the Messenger of Allah to your dwellings?

The people wept until tears rolled down their beards as they said:

“Yes, we are satisfied, O Prophet of Allah with our lot and share!”

Being a prophet, he owed no explanation to anyone, however, his foresight and compassion guided his manner of addressing the situation.

Rather than chastising them for doubting his justice in distributing the booty, he realized their human need to understand the reasons behind his actions, and he understood the true underlying cause for their anger which is their feeling of rejection.

Although on the surface it appeared that the reason for their criticism was the inequality in the distribution of the spoils, the Prophet assumed the best of his Companions and realized that they needed reassurance of his love and care for them, and not that they actually believed that he was unjust.

Muslims today can benefit from the example of the Prophet in his manner of dealing with criticism. His manner teaches us to always assume the best, be humble in all situations, and only become angry for the sake of Allah.