While Omar was planning the destruction of the new religion, Prophet Muhammad was praying to God that Islam be strengthened by one of the two Omar
aaa

Have you ever held a secret, one that you held close to your heart?

What if that sibling was known to be courageous, determined and single minded and you knew that your secret would cause him to become angry and dangerous? Would you tell? This is the story of the courageous brother, and how he discovered the secret that would change his life.

Omar ibn Al Khattab was born 11 years after Prophet Muhammad, into the tribe of Quraish; his family was part of the Adi clan. They were considered to be a middle class family but Omar’s father was known to be a harsh man.

Al Khattab did not let his son laze away his middle class life but insisted on hard work, often beating his son for small infractions of the rules.

Despite this Omar and his siblings were literate, an uncommon skill in pre Islamic Arabia. Omar was a fair skinned boy who grew into a tall muscular man, and as he grew into adulthood he became known for his wrestling skills and his business acumen.

Omar had a loud voice and knew very well how to use it to command attention. His entire demeanor denoted strength and power. He was a man used to getting his own way. When the new band of Muslims became a problem for the ruling class of Makkah, predominantly the tribe of Quraish, he declared his hatred for Islam and willing took part in the abuse and torture inflicted upon the fledgling group.

While Omar was planning the destruction of the new religion, Prophet Muhammad was praying to God that Islam be strengthened by one of the two Omars; Omar ibn Al Khattab or Omar Abu Hakim the enemy of Islam known as Abu Jahl.

Omar’s sister, Fatimah, and her husband Zayd had secretly accepted the message of Muhammad and converted to Islam. They learned about Islam in secret. They would clandestinely visit the house of Darul Arqam and listen to Prophet Muhammad teach and speak.

This was a secret that Fatimah held close to her heart because she, more than most, knew what would happen if Omar found out that they were Muslims. Although she loved Omar, Fatimah was frightened; many in Makkah knew that Omar would have no hesitation in killing a man. Would he also attack his sister if he found out the secret? 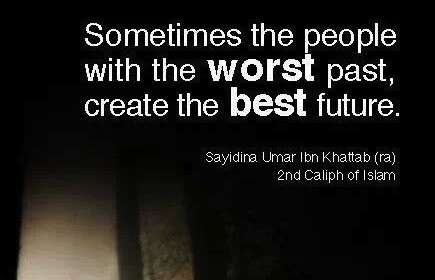 At a meeting of the leaders of Quraish it was agreed that Prophet Muhammad and his followers were causing a huge economic problem to the city’s elite. All agreed that the assassination of Muhammad was the only way to solve the problem. Thus without even a second’s hesitation Omar volunteered for this mission.

With his sword strapped around his waist and walked down the streets with his murderous intentions clear for all to see. One of his acquaintances, also a secret Muslim, could see that Omar was in a rage so he tentatively approached him asking where he was going.

Omar answered that he was going to kill the man who had disunited the people of Makkah while simultaneously cursing their gods. This was of course, Prophet Muhammad.

The girl with the secret, Omar’s sister, was at her home reciting Quran with her husband and their teacher. She had no idea that out in the street a man was attempting to divert Omar’s attention away from killing Prophet Muhammad by revealing her secret.

“Why don’t you look at your own family he said to Omar, your sister has embraced the new religion”.

Stopping at the door, Omar could hear the sound of the Quran being recited. He entered the house and the occupants scrambled to cover up what they had been doing. The teacher slipped out of sight and Fatimah tried to hide the parchment on which the words of Quran were written.

“Are you following the religion of Muhammad”, he shouted?

When Fatimah’s husband answered unashamedly yes he fell on him in a rage. As he was pummeling Zayd, Fatimah tried to wrest them apart and Omar knocked her to the ground. Her face was bleeding and the sight bought Omar to his senses.

Fatimah stood her ground and said defiantly, “You are an enemy of God! You hit me only because I believe in God. Whether you like it or not, I testify that there is no god but God and that Muhammad is His slave and messenger. Now do whatever you will!”

Her words made Omar pause, they dampened his rage. He asked that Fatimah show him the parchment she was trying to hide but she feared Omar would destroy it and refused to hand it over. Omar promised to return it and she reluctantly handed it over. The words on the parchment were recited to Omar and he felt his heart constrict, his anger disappeared and tears rolled down his cheeks.

Suddenly Omar remembered Muhammad and turned to leave the house. He rushed to Prophet Muhammad but was restrained by the men there. They had been forewarned that Omar was on a mission to kill Muhammad and had been waylaid by his sister.

Omar was taken in to see Prophet Muhammad, who grabbed him by both shoulders and said:

“Why did you come here, son of Khattab?”

With meekness and elation Omar said:

“O Messenger of God, I have come for no reason except to say I believe in God and his Messenger.”

Prophet Muhammad was overjoyed and cried out:

“God is great”, he said and the phrase was repeated by all those who gathered there.

Islam was strengthened by Omar. Fatimah’s secret led to great joy when it was finally revealed. When a person embraces Islam they are often put into a position that requires them to keep their new faith a secret.

Sometimes that fear is well founded but at other times the repercussions of revealing the secret might lead to something quite unexpected. Omar witnessed the birth of Islam but certainly did not run to embrace the new faith. God did, however, fill his heart with love for Islam and his life and death became for God alone.