Sha’ban is the 8th month of the Hijri Calendar. The months of this lunar calendar start when the first crescent of a new moon is sighted.

Since the Hijri calendar year is 11 to 12 days shorter than the solar year, Sha’ban migrates throughout the seasons like the other eleven Hijri months.

The month is very special for Muslims as it’s a prelude to Ramadan, the 9th Hijri month; “O Allah, make the months of Rajab and Sha’ban blessed for us, and let us reach the month of Ramadan (i.e. prolong our life up to Ramadan, so that we may benefit from its merits and blessings).”

The Astronomical New Moon (conjunction) will occur on Wednesday April 26, 2017 at 12:15 UT. However, the moon will be seen with difficulty in the Pacific Polynesian Islands only.

Wednesday will be the “Day of Observation” aka “Yawm Al-Ro’ya” -the day when Muslim astronomers observe the sky for the First Crescent of the newborn moon-.

Thus, Wednesday is expected to be the last day of Rajab 1438; meaning that this month of Rajab will be 29 days only. 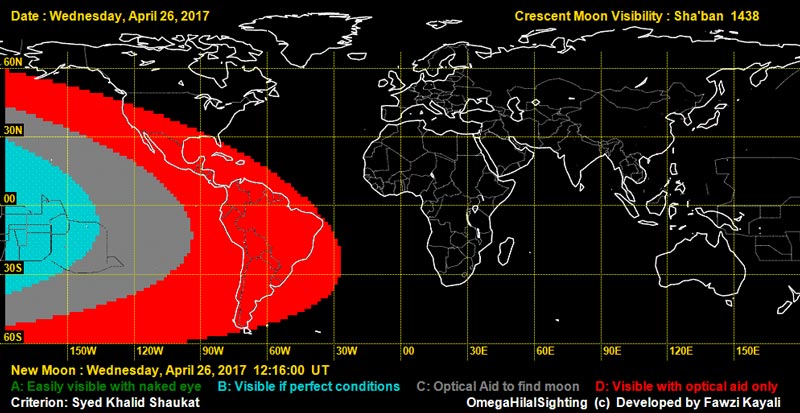 On Thursday April 27, 2017, the moon can be easily seen in the Muslim Countries and almost the entire globe.

According to Dr. Hatem Ouda, the President of the National Research Institute of Astronomy and Geophysics (NRIAG) in Helwan, Egypt, the newborn First Crescent will remain above the horizon after the sunset in Cairo for two minutes, while in other Egyptian cities the moon will remain for periods ranging between one and five minutes.

In Mecca, the moon will remain for four minutes, while in other cities of the 60+ Muslim Countries of the world, the period will range between one and 15 minutes; allowing Muslim astronomers to observe the cresent in the sky and proving that Thursday is the beginning of Sha’ban. 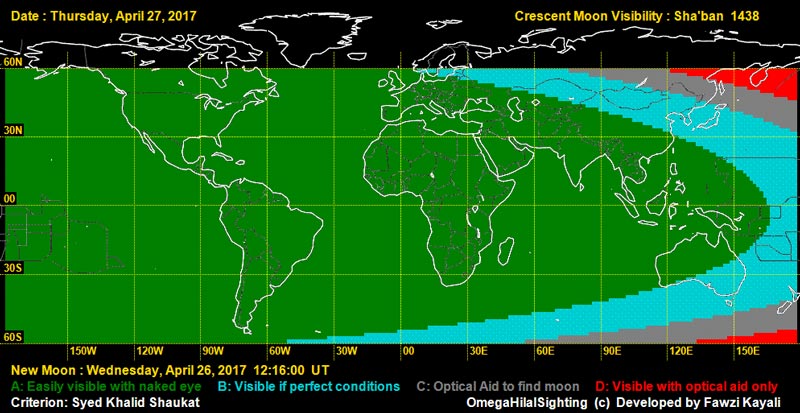 Based on these astronomical calculations, the month of Sha’ban should start on Thursday and is expected to span over 30 days, God willing.