Extraterrestrial Life | These illustrations represent different levels of adaptive complexity we might imagine when thinking about aliens. (a) A simple replicating molecule, with no apparent design. This may or may not undergo natural selection. (b) An incredibly simple, cell-like entity. Even something this simple has sufficient contrivance of parts that it must undergo natural selection. (c) An alien with many intricate parts working together is likely to have undergone major transitions.
aaa

Scientists and theologians have been dealing with the question of extraterrestrial life for centuries. As David Weintraub writes in his book on the matter, Religions and Extraterrestrial Life, scientist David Rittenhouse insisted back in 1775 that “the doctrine of a plurality of worlds is inseparable forms the principles of astronomy. But this doctrine is still thought, by some pious persons… to militate against the truths asserted by the Christian religion.”

It’s not just an 18th century problem, though. A study has looked at the relationship between religion and space policy.

It found that groups such as Evangelicals, who account for one-quarter of the US population, are hesitant to offer support for the space program. The space travel stands in opposition to their core beliefs.

However, it seems that Islam doesn’t have the same problem. Allah tells us in the Holy Qur’an: {And [He created] the horses, mules and donkeys for you to ride and [as] adornment. And He creates that which you do not know.} [Surat An-Nahl 16:8].

Weintraub explains in his book that the Qur’an makes explicit reference to the fact that Earth isn’t alone as a planet. With verses such as {Praise be to Allah, the Cherisher and Sustainer of the worlds.} [Surat Al-Fatihah 1:2]. And {He is the Lord of all like worlds.} [Surat Fussilat 41:09].

Weintraub states in his book that “the discovery of extraterrestrials should only strengthen a Muslim’s faith in the presumed infinite power of God.”

Films and science fiction literature fuel the belief that aliens are other-worldly, monster-like beings, who are very different to humans. But a new research suggests that we could have more in common with our extra-terrestrial neighbors, than initially thought.

In a new study in the International Journal of Astrobiology, scientists from the University of Oxford show for the first time how evolutionary theory supports alien predictions. Their model also helps us understand alien behavior.

They show that the same processes and mechanisms that shaped humans, such as natural selection has shaped aliens. The theory supports the argument that alien life undergo natural selection. Just like us, they evolve to be fitter and stronger over time.

Sam Levin, a researcher in Oxford’s Department of Zoology, said: “Astrobiologists think about what extraterrestrial life might be like. But making predictions about aliens is hard. We only have one example of life – life on Earth—to extrapolate from. Past approaches in astrobiology have been mechanistic. It took what we see on Earth, and what we know about natural sciences to make predictions about aliens.” 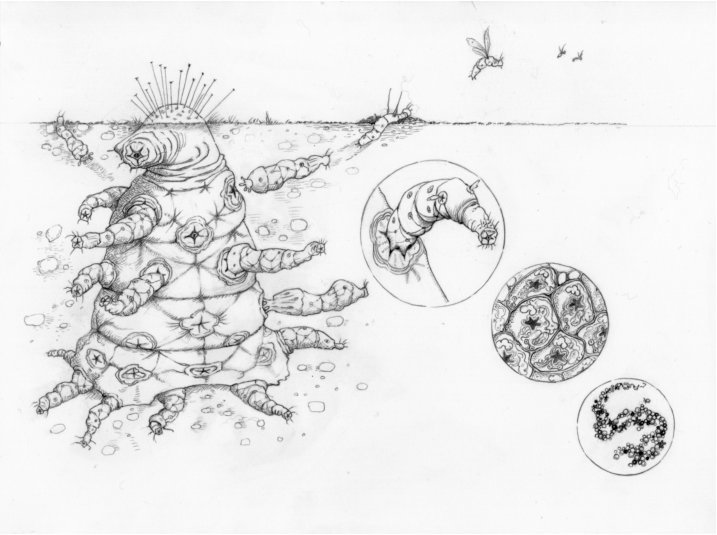 Major transitions in space: ‘The Octomite’. A complex alien that comprises a hierarchy of entities, where each lower level collection of entities has aligned evolutionary interests such that conflict is effectively eliminated. These entities engage in division of labour, with various parts specialising on various tasks, such that the parts are mutually dependent. Credit: University of Oxford.

“In our paper, we offer an alternative approach. We use evolutionary theory to make predictions that are independent of Earth’s details. It’s a useful approach because theoretical predictions will apply to aliens that are silicon based. They don’t have DNA, and breathe nitrogen, for example.”

Using this idea of alien natural selection as a framework, the team addressed extraterrestrial evolution. They also suggested how complexity will arise in space.

Species complexity has increased on the Earth as a result of a handful of events, known as major transitions.

These transitions occur when a group of separate organisms evolve into a higher-level organism. Their cells transform into multi-cellular organisms, for example.

Both theory and empirical data suggest that extreme conditions are a must for major transitions to occur.

The paper also makes specific predictions about the biological make-up of complex aliens, and offers a degree of insight as to what they might look like.

Sam Levin added: “We still can’t say whether aliens will walk on two legs or have big green eyes. But we believe evolutionary theory offers a unique additional tool for trying to understand what aliens will be like, and we have shown some examples of the kinds of strong predictions we can make with it.”

“By predicting that aliens undergone major transitions – which is how complexity has arisen in species on earth, we can say that there is a level of predictability to evolution that would cause them to look like us.”

“Like humans, we predict that they are made-up of a hierarchy of entities, which all cooperate to produce an alien. At each level of the organism there will be mechanisms in place to eliminate conflict, maintain cooperation, and keep the organism functioning. We can even offer some examples of what these mechanisms will be.”

“There are potentially hundreds of thousands of habitable planets in our galaxy alone. We can’t say whether or not we’re alone on Earth, but we have taken a small step forward in answering, if we’re not alone, what our neighbors are like.”