Ambassador for the charity, actress Laila Rouass thanked the guests for attending and supporting the charity.

“It’s an absolute pleasure to be here spending this very special iftar with you. Thank you from the bottom of my heart for attending tonight, your support means so much for One Family, who are making changes out there where it is needed most. I can say this with complete certainty and confidence as I spent some time in Lesbos with the refugee fund to see the type of work that they do.”

In addition to two comedians on the night, a personal highlight was the attendance of French singer Mennel Ibtissem. Born to a Syrian-Turkish father and a Moroccan-Algerian mother, she shot to fame on the French edition of The Voice where she sang an English and Arabic version of Leonard Cohen’s Hallelujah, which she also sang on the night. 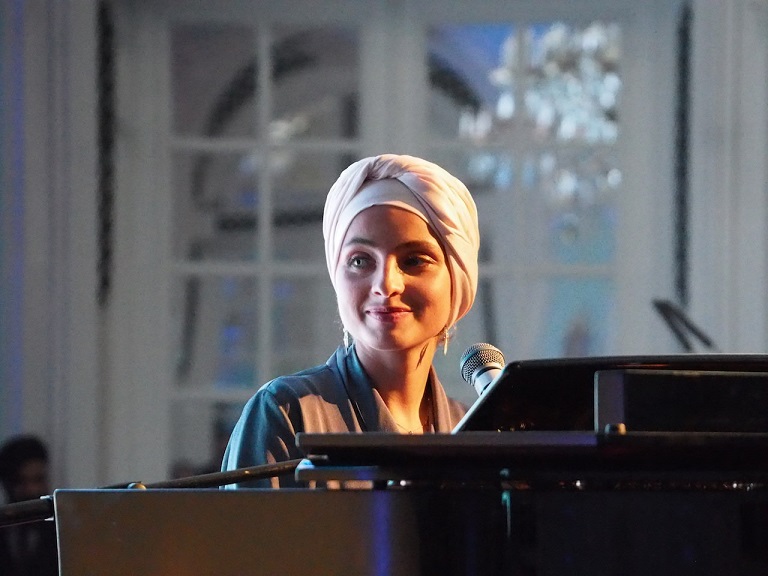 As Muslims – indeed people of any faith – we believe that this life is here to test us, to see how we respond in certain situations, whether we chose a better path or a less good path. Throughout life, we experience a range of emotions from sadness and pain to joy, happiness, and peace. No soul is spared a trial, but what defines humanity is how we treat honor and respect one another.

This spirit of humanity was no better represented on my table where sat alongside me was Gurdev Jassi, a non-Muslim who is the Chairman of Sunrise Radio.

Throughout the 90s the radio station was the default platform almost every British South Asian family would tune into to hear the call to prayer to break their fast. The efforts of a non-Muslim enabled Muslims to fulfill their religious duties.

People of different faiths living and working together in communities where safety and security and freedom for all are granted, this was part of Prophet Muhammad’s vision and his definition of an ‘ummah,’ a community.

The second part of the Prophet’s vision was to encourage people to want for others what they want for themselves.

Refugees suffer one of the greatest indignities out there, and helping people fleeing wars and hardships, just as the early Muslims migrated from Makkah to Madinah, to find safety and refuge, is something all of us can and should indeed support.