It was the 12th year after the commission of the Prophet’s mission. Muslims had endured tremendous hardship at the hands of Quraish, yet they remained steadfast in their faith.

The seeds of belief had firmly taken root in the hearts of the believers, yet the realization of Islam at a societal level was stymied by a socio-political system that resisted overtures for complete submission to the one true God.

In addition to agreeing to worship Allah alone, the men pledged not to steal, not to commit adultery, not to kill their children, not to utter slander, not to intentionally forge falsehood and not to disobey the Prophet (peace and blessings be upon him).

This meeting came to be known as the First Pledge of Al-`Aqabah.  The significance of the pledge cannot be overstated. It laid the foundation for the Hijrah and offers an important lesson to us all: success in our collective work begins with self-purification and abstention from those matters that Allah has prohibited.

After the pledge, the Prophet sent Mus`ab ibn `Umair (may Allah be pleased with him) as an envoy to Madinah. Mus`ab found Madinah to be very fertile ground; it was not long before every household had at least one member who had accepted the call of Islam.

The next year the Prophet met with a larger party of Medinite Muslims. Consisting of 72 men and 3 women, the members of this delegation had come to offer more than obedience to the Prophet in their personal matters. Rather, they came to offer him refuge in the city of Madinah.

During the second meeting, which has come to be known as the Second Pledge of Al-`Aqabah, the group agreed to listen and obey in all circumstances, to spend in both prosperity and adversity, to enjoin good and forbid evil, and to fear the censure of none when in Allah’s service. 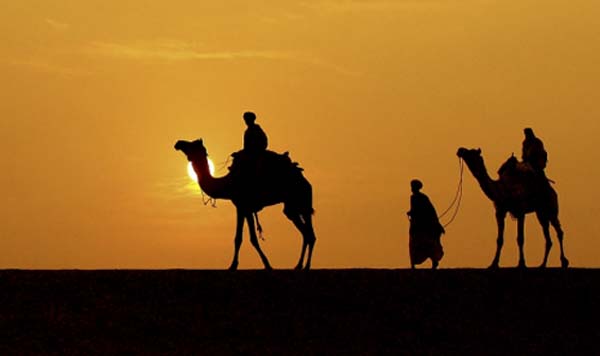 Hijrah: Living for a Mission

This pledge would have major consequences for the people of Madinah. It meant that those who oppressed the Prophet (peace and blessings be upon him) would now turn their attention to the city of Madinah.

In essence, by agreeing to protect the life of the Prophet (peace and blessings be upon him) the delegation from Madinah was placing itself in direct conflict with the disbelieving Arab tribes. Yet, the conviction of their hearts led them to sacrifice the comfort of this life and allowed them to remain steadfast in upholding the pledge.

The Second Pledge of Al-`Aqabah was important precursor to the Hijrah that offers important lessons for us.  First, our collective work must be structured. That is, we must have respected leadership that is obeyed.

Second, once we commit to this mission, we should not waiver, nor should we be deterred by the everyday vicissitudes of life.

Third, we should understand that we have an obligation to reform the society and strive to call humanity to what is pleasing to the Creator. Finally, we should not yield when we face resistance.

Now that the foundations for the Hijrah were laid, the Companions of the Prophet (peace and blessings be upon him) had to migrate to from Makkah to Madinah.  This was no easy matter.  On the one hand, the Companions had a deep love for the city of Makkah. Despite the hardship that they had faced from their countrymen, Makkah was their home and leaving it would mean leaving the land where they had established their lives.

On the other hand, the people of Quraish were keen to resist any attempt for the Muslims to leave Makkah because doing so would limit the ability of Quraish to suppress Islamic activism. These realities left many of the Companions with no option but to leave Makkah with a heavy heart, and under the cover of darkness, without any of their possessions.  Yet, for the opportunity to worship their Lord, they were willing to make such a sacrifice.

One great example of such sacrifice is Suhaib Ar-Rumi.  As a young boy, Suhaib had been enslaved by the Byzantine Empire.  After 20 years in captivity he managed to escape and settle in Makkah.  After working hard, he eventually become a rich and honored man in the city.

Angry that the Prophet (peace and blessings be upon him) was able to escape, the Quraish went on high alert and placed guards at the door of Suhaib’s home.

Suhaib was able to slip away from the watchmen under the cover of darkness, but it was not long until they were closely in pursuit.  They surrounded him as he climbed up a hill, and that is where a blessed discussion occurred:

Suhaib warned the men not to climb the hill or he would shoot them with his arrows.

They replied, “Suhaib, we cannot let you escape from us with your life and money. You came to Makkah weak and poor and you have acquired so much.”

Suhaib replied: What would you say if I leave you my wealth, would you then leave me alone?

The watchmen agreed and Suhaib left all that he owned so that he could migrate to Madinah.

Immediately upon his arrival to Madinah, the Prophet (peace and blessings be upon him) remarked: Your transaction has been fruitful! Then Allah revealed the following:

{And of the people is he who sells himself, seeking means to the approval of Allah. And Allah is kind to [His] servants.} (Al-Baqarah 2:207)

The success of the Hijrah laid the foundation for the growth and development of Islamic civilization.  As we look at the current state of the Ummah, the Hijrah provides important lessons for those working to awaken the Ummah and to reestablish the rightful place of this Ummah on the global stage:

Second, we must work together and cooperate in an organized manner.

Third, we must enjoin good and forbid evil.

Fourth, we must not waiver when we faced difficulties.

Finally, we must sacrifice those things that are dear to us to obtain a higher purpose.