For the second year in a row, British Muslims and non-Muslims came together at the world famous Savoy Hotel for an exceptional Ramadan #IftarAtTheSavoy to support One Family charity’s Syrian Refugee campaign.

With delicious food served by Madhus and traditional Kashmiri pink tea from Regal Food Products, the evening brought together an array of entertainers, including Mennel Ibtissem who shot to fame with her angelic voice, magical!

A fundraising initiative, the program included a live Skype interview with a young Syrian refugee boy named Mohamed who, aged six, when collected firewood, was hit by a stray bullet and lost one of his legs.

While still a child he shared that he was very happy with his prosthetic leg and that his ambition is to grow up, to become a doctor, and to help other injured children as a bone doctor (orthopedic surgeon). 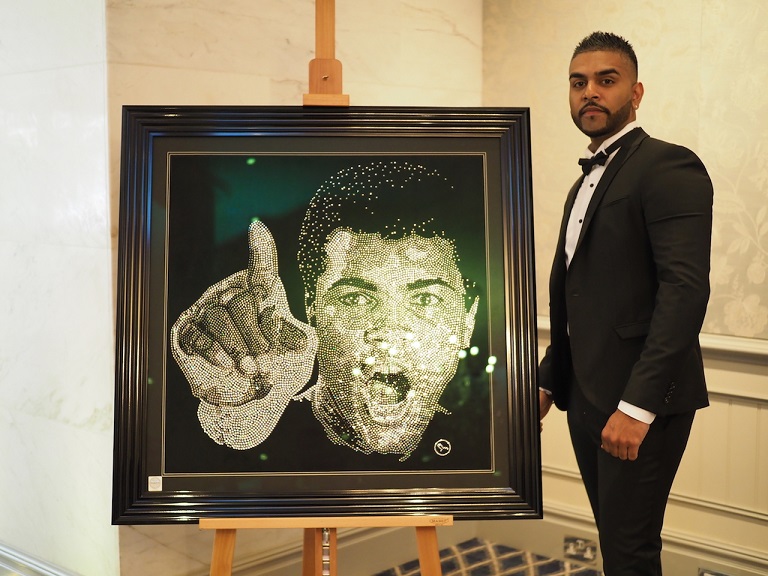 Ticket sales aside funds were raised through a short live-auction before the break of the fast, and a silent auction that ran throughout the evening where guests could bid on items displayed in a gallery in another room. Many of the items were donated to help raise funds.

One of the artists, San B, whose piece was made from Swarovski crystals said, “I’ve always been interested in icons and legends and it doesn’t get any bigger than Mohammad Ali. Each crystal has 18 cuts, the way the light hits it, the artwork talks to you. I’ve been working with One Family for over a year now, donating a piece for most of their events. (I support the) fantastic work they do helping people in Syria, to the children and women in Nepal, it definitely has a special place in my heart.”

One Family Iftar At the Savoy