MANCHESTER – Qaisra Shahraz, is an internationally renowned author of British-Pakistani heritage. Her novels include ‘The Holy Woman’ and ‘Revolt.’ Qaisra’s interfaith activism outside the world of writing has won her plaudits.

She was the winner of the National Diversity ‘Lifetime Achiever Award’ in 2016 and a year later, named the most influential woman in Manchester by lovinmanchester.com. 18 months ago she conceived the idea of a Muslims arts and culture festival in the UK.

This week MACFest 2018 is launched: 50 events across 10 days, bringing Muslim talent from across the art world to Greater Manchester.

AboutIslam asked Qaisra about her inspiration and what advice she has for Muslims in western cities to showcase their talents in mainstream settings.

AboutIslam: We hear you have been out buying lanyards at the last minute! How are you doing, now you’re in the midst of your first festival?

Qaisra Shahraz: As you can imagine it’s very exciting. nerve-wracking and hectic. It’s like having a wedding, as you draw nearer to it and all the preparations, it’s crazy. It’s taken a year and a half from when I had the idea, to this opening. It’s one thing planning, another thing to deliver something successfully. InshaAllah it will go well. A lot of work has gone in from my team and myself.

AI: Creating a Muslim Arts Festival, must be a dream come true

QS: It’s never, ever, been a dream of mine, to do a festival on this scale. I’ve attended festivals all around the world, but to undertake something like this when you have so much else going on in life, like my fifth book which I am writing!

Would I want to do a festival, no way?

AI: So what made you decide to take on the mammoth task of creating a festival from scratch? 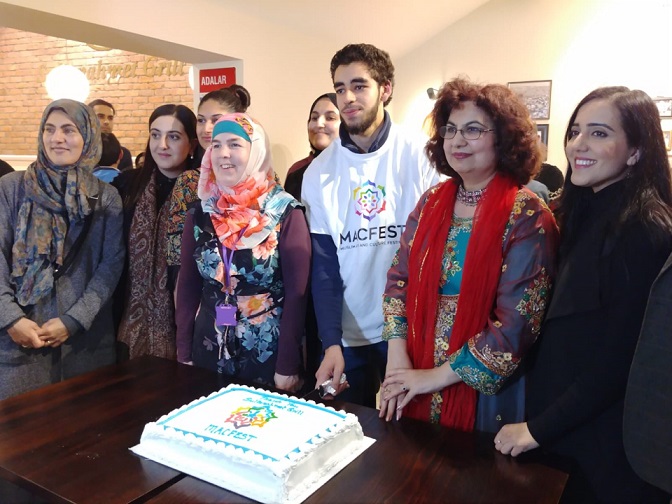 AI: ‘British Muslim’ is often seen as synonymous with South East Asian culture. How does MACFest reflect the diversity of the UK Muslim reality?

AI: What has the response been from mainstream society to hosting or supporting such an event?

QS: The focus is on music, history, architecture, literature and this is for everyone. It had to be hosted by as many non-Muslim venues as possible. I am an educationalist. I’m trying to break down barriers and I am very aware that children suffer a great deal from misconceptions and Islamophobia. I wanted to give those children their self-respect back. Local schools and several colleges are showcasing Muslim Heritage on their campuses and that’s how its grown into this mammoth festival.

AI: Sessions and workshops like ‘famous historical Muslim women’ and ‘Muslim women speak out’, feature an impressive array of female speakers and artists.

QS: It happened naturally. All my novels feature more female than male characters. At the opening ceremony Saturday morning the Muslim women greeted everyone in their own languages. Getting rid of stereotypes is part of this festival.

AI: What’s been the biggest challenge?

QS: Well, after 15 months of having it (planned) in my head, I am now working with a big team from diverse backgrounds, Turkish, Jewish, Christian, all backgrounds, all volunteers. That’s a big challenge. But without them, I couldn’t have delivered it.  Looking for authors and artists from a diverse background was a challenge as well. I am delighted the Somali and Nigerian communities are represented.

AI: What advice would you give to others who are nervous of approaching mainstream organizations in relation to Muslim-led events?

QS: I say to my children ‘man has reached the moon’. This is all on earth, nothing is impossible. If someone says, ‘no’ to you, start again, so what? Go mainstream don’t marginalize ourselves. We are British and Muslim, wanting to be seen as ideal citizens of the world. But we also have our own culture which can’t be taken away from us. And I’m proud to be a Muslim.