LONDON – Their inaugural event, perhaps the first one of its kind in the UK, MFest ‘came out of nowhere’ and caught everyone by surprise.

Running across the weekend at the British Library, their director Tufyal Choudhury described the event as, “a festival of Muslim cultures and ideas,” adding that “the idea of MFest came from the narrowness of the representation of Muslims in the public sphere.”

Baroness Warsi took to the stage on Saturday morning with a talk entitled “The Right Kind of Muslim.”

Commenting on a double standard where a politician can say something foolish and be expected to be forgiven, Warsi said, “I find it hypocritical that we do not acknowledge journey, everybody is on a journey… But do you know what the sad thing is for British Muslims, if you have ever said or done anything (bad) there is no off-ramp.”

“There is no road to redemption. There is no path to rehabilitation. There no, I was 20 years old and I said some stupid things, (now) I’ve moved on from that.”

Speaking on the importance of engaging in society Warsi added, “We need to move away from being protestors, we need to move towards collaborative work. Not just with government but with other groups as well… You can’t get anything done unless you engage with the system… But I also think that you have to combine getting things done with being true to yourself.”

“Khattak dance isn’t really a dance form, but a form of storytelling,” she said.

Lining up the participants, they began with a warm up during which Amina demonstrated the similarities between traditional Indian dance forms and Western ballet observing that the body is one, so the style of movements and poses at times can be similar.

Participants included two students, both volunteers at the event, one of whom had come over from Germany for MFest.

The Khayaal Theatre ran a performance with actress Eleanor Martin. The interactive show encouraged the audience to sing along as Eleanor tapped on drum: “He’s the Mulla Nasruddin. He’s the wisest fool there’s been. Rides his donkey round the town. Rides it backward like a clown…” Adults along with children sang and became a part of the story. 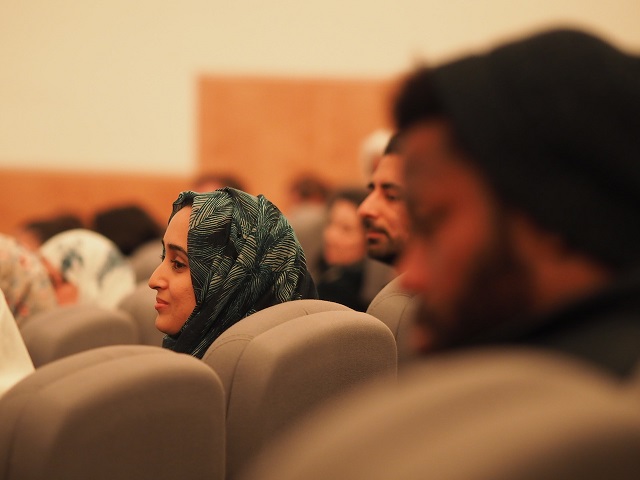