LONDON – The MFest of London and the Muslim Art and Cultural Festival (MACFest)  will organize a ten-day event in Manchester next November to bridge British cultures and tackle Islamophobia among British children.

“The reason why I wanted to [have some events] in schools is because, with the rise of extremism, there’s been a lot of negative backlash and children suffer in schools if they are Muslims because they get bullied,” said novelist Qaisra Shahraz, who is founder and curator of MACFest, told Salaam Gateway on September 30.

MFest and MACFest are big multi-day, multi-arts events. The first was held in 2017 at central London institution; the British Library and targeted the general public.

The much bigger MACFest is more widely distributed and also involve museums, galleries, universities, and schools.

“I want these [Muslim] children to feel proud of who they are. And for the children who bully them to learn that those are the actions of extremists – the rest of us are normal peace-loving people,” said Shahraz, whose community involvement includes being a trustee of Manchester Multi-Faith Centre, Vice Chair of Faith Network 4 Manchester and Executive Member of the Muslim Jewish Forum of Greater Manchester.

In a similar theme last April, a three-day festival of culture and ideas dedicated to Muslim communities was held by MFest and MACFest at the British Library in London.

“It is vital that creativity in Islam is nurtured to regenerate and recharge the values, and to adapt to new eras and landscapes,” said Rashid.

“Islam is pure in its essence; it’s people who change with the times. So, it’s about making sure we keep that connection thriving.” 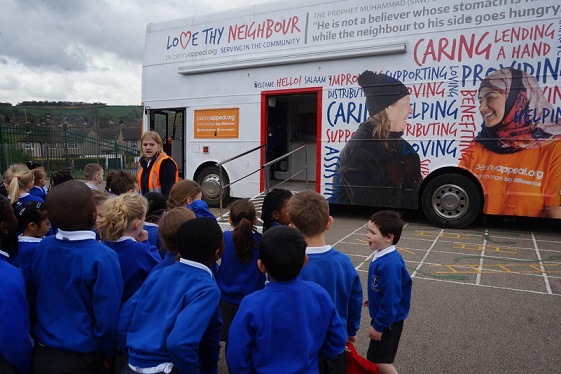 Other initiatives have been around for much longer.

On their behalf, Hats of Faith started out as an illustrated children’s book that looks at nine different head coverings, including a turban, hijab, a Rastafarian hat, and an African head wrap. The book has spurred a series of school workshops since its release in August 2017.

Many other British Muslims are finding ways to engage children. For example, author Zainab Mian uses Islamic themes in her mainstream children’s books, while Chickpea Press uses the 99 names of Allah to connect with young readers.

Another artist, Tiny Mu’mins, uses puppetry and song to explore the stories of the prophets. Moreover, the nasheed artist, Khaleel Muhammad, breaks down religious stereotypes through his children’s book Muslim All-Stars: Helping the Polonskys.

In late October, Khayaal will be staging performances of tales from Muslim cultures during the opening of the British Museum’s newest permanent gallery, Albukhary Foundation Gallery of the Islamic world.