What is essential is not one’s seeing himself sincere but the recognition of his sincerity by Allah.
aaa

As for those who believe and do right actions and humble themselves before their Lord, they are the Companions of the Heaven, remaining in it timelessly, for ever. (Quran 11: 23)

Sincerity means being deeply devoted to Allah by heart. A sincere person has a deep fear for Allah, profoundly believes in Him, sees and advocates the righteousness in the best way. He is the one who believes in Allah with certainty, the Hereafter, prophets, the Heaven and the Hell and angels.

We are aware of prophets’ sincerity because Allah sees them sincere and declares them to be so. All of the prophets were blessed people who were devoted to our All-Mighty Lord with great love and experienced sincerity in its most profound state.

Likewise, due to their sincerity, all the prophets were blessed people who absolutely engaged in the most accurate act, whose deeds resulted in good and beauty and who truly turned to Allah in all their deeds.

Who is the Sincere?

Due to his fear for Allah and profound love of Allah, a sincere person is someone who readily discriminates between the right and the wrong, who absolutely implements what is right according to the Quran and, without seeing any limits in closeness to Allah and love for him, who discharges all the requirements of the religion in the most accurate and absolute manner.

Consequently, sincerity is the kind of attitude which appears with fear of Allah, and closeness and love of Him and is experienced in the form as depicted in the Quran. 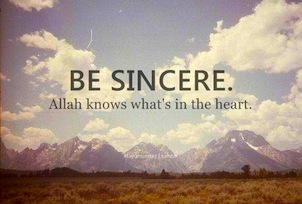 When one examines the Quran with a sincere heart one can immediately see that the Quran is the true Divine book.

But if someone has never had access to the Quran, then he is Ahl Al-Fatrat, but if he believes in the one Allah, loves and fears Allah, does good works for His approval and prays, fasts and performs his religious duties as required by the religion, then that person may hope for Paradise.

However, nobody can ever be certain that either he or anyone else will go to Heaven or Hell.

So long as a morally virtuous person lives for the approval of Allah he may hope for Paradise from Him, and one may hope that this person will be one of the saved, though one can never be certain of this. As Allah reveals in the Quran, all believers live “between hope and fear:”

Their sides eschew their beds as they call on their Lord in fear and ardent hope. And they give of what We have provided for them. (32: 16)

Since sincerity can only be experienced with unconditional belief in Allah, hoping for the Heaven merely saying, “I am sincere,” without fulfilling the decrees of the religion is an insincere view that only deceives the person himself.

It is a great collapse of reason to appear with a reasoning commanding that “satanists can go to the Heaven if they are sincere” and try to show a criminal person who overtly murders a human being and who evidently denies Allah as a sincere person deserving the Heaven.

A person who denies Allah, commits crimes and engages in immoral acts commits all these misdeeds due to his insincerity and his disbelieving and rebellious mind.

Such a person is not even remotely close to sincerity. He is dishonest and a liar. What is essential is not one’s seeing himself sincere but the recognition of his sincerity by Allah.

As long as a satanist does not regret, repent and turn to Allah with sincerity, he is an unbeliever who is doomed to the Hell. (Allah knows the truth).

Almighty Allah gives as an example in the Quran of a man who owns a garden and who considers himself sincere and thinks that he deserves the Heaven even though he is in complete denial of the Hereafter:

He entered his garden and wronged himself by saying, “I do not think that this will ever end. I do not think the Hour will ever come. But if I should be sent back to my Lord, I will definitely get something better in return.” (18: 35-36)

Our Lord informs us of the condition of the person whose garden was destroyed as a calamity that came over him due to his denial.

There was no group to come to his aid, besides Allah, and he was not given any help. In that situation the only protection is from Allah, the Almighty. He gives the best reward and the best outcome.

Almighty Allah “knows what their hearts keep hidden and what they divulge (27: 74)

Those who are insincere to Allah are people who cannot appreciate Allah properly and who cannot comprehend this great fact. Almighty Allah, Who knows all what is concealed, is certainly the One, Who knows best the sincerity in a person’s heart. Our Lord states in one verse of the Quran as thus:

Your Lord knows best what is in your selves. If you are righteous, He is Ever-Forgiving to the remorseful. (17: 25)