Indeed Allah Most High says: ‘I am as My slave thinks of Me, and I am with him when He calls upon Me. (Al-Bukhari)

“God probably hates me… I am so bad; and I always mess up. I don’t deserve any good from God, and as punishment, I probably will not be given success in my other endeavors.”

How many people have felt this way at some point? Sometimes, our sins weigh heavily on us. We recognize our mistakes but instead of turning back to God we turn away. We feel that we must be so bad that even the All-Merciful will reject us.

Once we slip up or feel that we do not have the strength to continue, we do not think well enough of God to believe that He will guide us through. We must understand that when we think well of God, that is what we will find.

Thinking Well of God in Difficulty

Think well of God when embarking on something difficult, even if you fail.

When the most beloved person to God, the Prophet Muhammad (peace be upon him) was thinking of migrating to Madinah, he started talking to all of the different tribes that came for Hajj in the hope that one of them would accept Islam or at least offer protection to the believers. He spoke to twenty-six different tribes and was rejected by all of them. Some of the tribes even cursed and mocked him.

Let’s stop here. He made dawah (calling to Islam) to twenty-six tribes. Can you imagine the feeling of being rejected by five? What would happen after ten rejected you? How low would your morale be? When would you have given up? 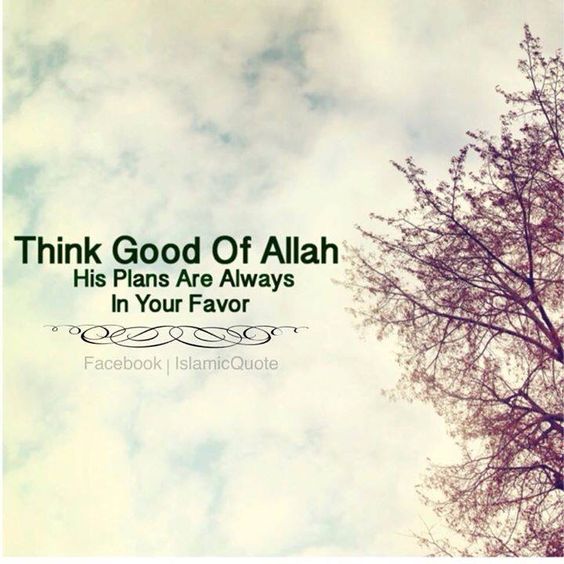 Finally, the Prophet met a few youth from Madinah who believed in his message. He did not despair because he had a good opinion of God, which motivated him; he knew that God would not leave him.

Many people give up in the face of something seemingly impossible. Sometimes, we give up on an individual level: getting married, getting that job we want; sometimes it is on a global level, such as injustice in the Muslim world. But the point of the struggle is to realize who is in charge.

It is God. God has told us that He is as His servant thinks of Him. If we think well, then that is what we will find.

If we do not, then that is what we will find. Your opinion should be that God is so merciful that He will come to your aid.

What happens when we are faced with failure? When one does not get something, even if their intention was for the sake of God, they should not feel disheartened.

You have a good opinion of God; “failure” is just a minor setback. You need to be tested to strengthen your resolve. If you do not get that amazing job you want, know that God has saved something better for you. Only He knows what is best for you.

Think Well of God When You Sin

What about when we constantly slip-up and cannot leave a certain sin? For some of us, this makes us give up on ourselves; we believe we don’t deserve any good from God.

We have to remember that God is Al-Wadud (the Most Loving). His mercy overcomes His blame. It is not about deserving. If you thank God, He gives you more. It is not because we deserve more; it is because God is that great. He is that generous.

The devil makes us focus on how bad we are in order that we despair of God’s mercy, when the Prophet taught us:

The Prophet said that:

One of the signs of excellence of one’s worship is thinking well of God. (Ahmad)

This does not mean that we should not reflect on our state. Al-Hasan al-Basri, the Muslim scholar, said:

If we think well of God, no matter how bad we are, we also have hope that we can be better and thus we strive to do good deeds. And if we think bad of God, we assume that He will never forgive us nor can He make us better; so we continue to sin. However, we should not make a mockery of this concept and deliberately sin, thinking God will forgive us anyway.

One of the key principles of repentance is regret. If we do not truly regret the sin, and simply ask for forgiveness to have that sin erased, we are paying lip service. Remember, you will only get what you intend.

All works are based on intentions. (Al-Bukhari)

When we do wrong, let us feel guilty, but let us also flee to God. Have a good opinion of God. If you are sincere, He will forgive you. He is that forgiving. And He is that great. He is that magnanimous.

Even when we commit the same sin again and again and again, our good opinion of God should let us know that as long as we constantly strive against ourselves and against that part of us that wants to indulge in that sin, we have already been forgiven. At the end of the day, it is Satan who wants us to go to hell, not God. God tells us in the Quran:

Allah wants to accept your repentance, but those who follow [their] passions want you to digress [into] a great deviation. (An-Nisa’ 4: 27)

Satan does not just want you to go to hell, but also wants to ensure you live in hell in this world. Just like he despaired, he wants you to despair. Our good opinion of God should never allow us to do that. God wants to accept our repentance, because our repenting is recognition of His Name Al-Ghaffar (the One who constantly forgives).

Just as the Prophet told us that God is too gracious to turn away the hand that asks Him, He is also too merciful to disappoint us and our good opinion of Him.

Think Well of God When You Are Tested

Tests come to us in a myriad of ways. We should just know that thinking well of God would make us look beyond the test. This test is something from God, and He wants to teach us, to purify us from sin, to strengthen us, and to bring us closer to Him. We do not have a cruel God; our God is the most merciful of those who show mercy. When we approach our tests with that frame of mind, we cannot but gain from our experience.

So what does it mean to think well of God?

It means to take that step. When we mess up, even if we messed up in a major way, we return to Him. We return to Him recognizing that what we did was truly horrible, but we ask for His forgiveness because we know He is that forgiving, and that His mercy encompasses everything. When we mess up again and again, and feel sick of ourselves, we return to Him with a sincere du’a (supplication) to help us stop, knowing that He will respond. It means having grand hopes and aspirations, and working towards them knowing that God: