Most sufferers lead sedentary lifestyles, with little if any exercise, and eat a poor diet often high in sugar and carbohydrates.
aaa

No, Metabolic Syndrome X is not some illness straight from Star Trek or the X Files, or even some virus from an experiment gone wrong. In fact, you may already have the disease and not even know it! That’s because one out of three adults has succumbed to it in countries with a well-fed population!

The worst part is that you figure it can’t be you because you watch what you eat, you’re not overweight and you don’t smoke. Still, you may be a victim of Metabolic Syndrome X.

So What Is This Mysterious Disease?

The name ‘Metabolic Syndrome X’ was coined by Gerry Reaven of Stanford University to designate a patient group that, while not having actual diabetes, were developing other metabolic illnesses that could lead to diabetes or heart disease.

Metabolic Syndrome X is also known as borderline diabetes, pre-diabetes, or impaired glucose tolerance, and has been formally recognized by the medical community for only a few short years.

The distinguishing factor between metabolic syndrome x and diabetes is that in the latter, insufficient insulin or virtually no insulin at all is being produced by the pancreas, while in the former, insulin is being produced but is not being used properly by the body.

How Do You Know If You Have It?

The early stages go almost completely unnoticed. Signs and symptoms include tiredness, especially after meals, creeping weight gain, a stealthy increase in hypertension, resistance to insulin with raised levels of triglyceride fats, and cholesterol in the blood. Sounds an awful lot like diabetes with accompanying cardiovascular disease, doesn’t it? That’s because it can be a precursor to both.

While diabetes is the usual diagnosis for blood sugar levels of 126 mg/dL or higher, those individuals with sugar levels between 110 mg/dL and 126 mg/dL can experience some of the same problems as diabetics but without the initial symptoms.

Most sufferers lead sedentary lifestyles, with little if any exercise, and eat a poor diet often high in sugar and carbohydrates. As a result, they are usually also overweight.

There is also a genetic predisposition, so it will often be seen running in families. Therefore, a strong knowledge of family medical history is important.

Metabolic Syndrome X generally starts out with insulin resistance; a result of excessive insulin secreted by the pancreas (hyperinsulinemia) to deal with increased amounts of sugars (hyperglycemia), particularly fructose, from our diets.

After a period of time, body tissues do not respond normally to the insulin secreted. This results in insulin levels becoming even more elevated as the body tries to compensate and overcome the resistance to insulin.

Increased glucose as well as high levels of insulin are also major sources of free radicals, which numerous studies have shown to be a major factor in cardiovascular disease.

How Is Metabolic Syndrome X Diagnosed?

While there are no carved-in-stone criteria for the diagnosis of metabolic syndrome x, it is generally held that the presence of three or more of the following components confirms the diagnosis:

What Can You Do?

The safest, most effective way to reduce insulin resistance, particularly in the overweight and obese, is weight loss and increased physical activity. Believe it or not, most of the metabolic abnormalities will significantly improve with just diet and exercise!

Typically however, each metabolic disorder is treated separately. That is, the elevated lipids (i.e. high Low Density Lipoproteins [LDL], low HDL, and high triglycerides) commonly seen in syndrome x are treated with statin and/ or fibrate drugs.

Premature clotting problems that can lead to a blood clot are dealt with by employing aspirin or blood thinning agents like Warfarin. And, of course, antihypertensive medications are used for high blood pressure (being careful to use only those that don’t negatively affect glucose levels).

While this is great for the pharmaceutical companies, it is probably not the best approach when almost all of the disorders will reach acceptable levels by just losing weight, watching what you eat, and doing aerobic exercise! A 2001 study by the American Diabetes Association, for example, showed a weight loss of as little as 5% – 7% can reduce incidence of Type II diabetes by 58%!

So How Can We Treat Metabolic Syndrome X Without Drugs?

Another nail in the coffin of the low-fat, high carbohydrate diet! Out with the carbs, in with protein and non-starch vegetables like leafy greens, broccoli, asparagus, cauliflower, cabbage, and tomatoes while reducing the starchy ones-potatoes, yams, etc. Fiber is also important in regulating insulin.

Beware of too much soy and legumes though, especially vegetarians who rely on them as meat-protein substitutes. Soy affects the thyroid, slowing down the body’s metabolic rate and making it hard to lose weight (while concurrently making it easy to gain weight), while many legumes (beans) are high in starch. Look more toward fish, eggs, and cheese as protein selections.

Omega-3 fatty acids have been found to be very effective in controlling insulin resistance. They are found in many seeds (flax, pumpkin, hemp), nuts-particularly walnuts, eggs, wheat germ, fish, and fish oil.

All of the recommended supplements listed above have numerous scientific studies to confirm their effectiveness in treating metabolic syndrome x.

Also, successfully treating hypertension can significantly reduce the risk of death and heart disease in diabetes and Metabolic Syndrome X according to recent studies.

The worst thing you can do is to do nothing at all! Since you don’t feel sick, the prevailing symptoms of increased blood sugar levels, increased blood fats, and hypertension continue, and ultimately lead to severe disease and illness. For example, blood glucose levels in the pre-diabetic range of 110-126 mg/dL can swell heart disease risk by 50%!

Metabolic Syndrome X is a common, poorly recognized, and potentially deadly disease. But it is treatable; most effectively by weight loss, diet, and exercise. It’s been said so many times before, but in the case of syndrome x, it’s especially true: your health really is in your own hands. 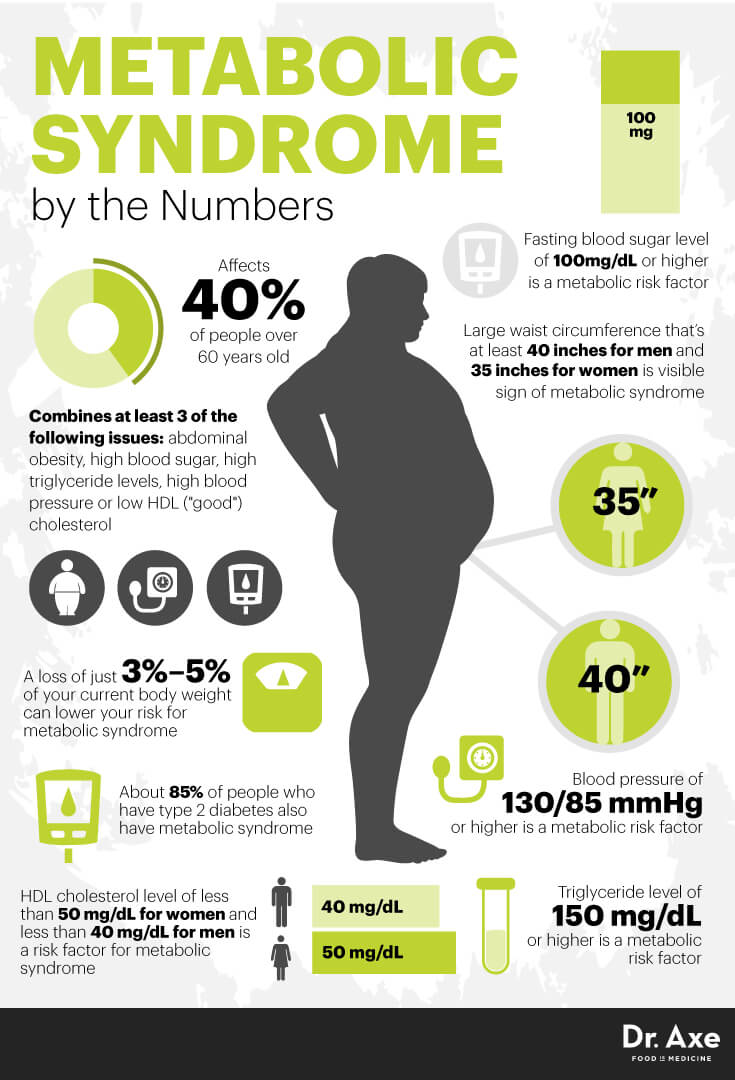