Whoever says, ‘Subhan Allaahi Wa bihamdihi, (Allah is free from imperfection and His is the praise). One hundred times a day, will be forgiven all his sins even if they were as much as the foam of the sea. (Narrated by Bukhari)
aaa

Exams, work pressure or nursing a young child? – 10 deeds to still have an amazing Ramadan.

This year, I have 3 of my biggest exams in Medical school that are all bang on in the middle of Ramadan.

This was initially a source of anxiety for me. Would I be able to study in Ramadan? If I am, would that affect my worship and iman?- Especially because exam times actually lead to a big decrease in my iman levels.

So, I have decided to make a list of ten deeds that are immensely rewarding and yet not that difficult to do, and hope Insha’Allah that you might be able to at least make these 10 deeds a regular part of your Ramadan if not anything else.

Do remember, that the rewards are simple for the regular times. Ramadan usually means multiplication of the rewards! Before getting into that though, a few important things to remember:

Someone who is working to ensure that their family is well off is also doing a deed for the sake of Allah. Especially for exams, the Prophet (peace be upon him) has said:

Whoever takes a path upon which to obtain knowledge, Allah makes the path to Paradise easy for him. (Narrated by Bukhari)

Allah does not place any burden upon a soul that one cannot bear. (Quran 2:286) 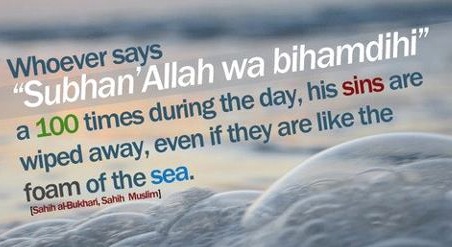 Now, here are 10 deeds that can be done easily to earn a mountain of rewards:

1.6 billion good deeds in a few seconds- make du’a for the ummah’s forgiveness

Whoever says, ‘Subhan Allaahi Wa bihamdihi, (Allah is free from imperfection and His is the praise). One hundred times a day, will be forgiven all his sins even if they were as much as the foam of the sea. (Narrated by Bukhari)

Ramadan is all about forgiveness, so will we take a minute?

Is anyone of you incapable of earning one thousand rewards a day?

Someone from the gathering asked:

“How can anyone of us earn a thousand rewards?”

Prophet Muhammad (Peace be upon him) said:

Glorify Allah a hundred times by just saying “Subhanallah” and a Good deeds will be written for you, or a thousand sins will be wiped away. (Narrated by Muslim)

The Prophet (peace be upon him) said in a hadith that:

Whoever says “Subhanallahi wa bihamdihi subhan Allahil adheem” a date palm tree will be planted for him in paradise.” (Narrated by Tirmidhi).

In a few minutes, how many hundreds of date palm trees can we plant?

Reward for multiple hours of dhikr in a few seconds

The Mother of the Believers, Juwairiyah bint Al-Harith reported that, “the Prophet came out from my apartment in the morning as I was busy in performing the dawn prayer. He came back in the forenoon and found me sitting there. The Prophet said:

Are you still in the same position as I left you.

I replied in the affirmative. Thereupon the Prophet said:

I recited four phrases three times after I had left you. If these are to be weighed against all you have recited since morning, these will be heavier. These are: Subhan-Allah Wa bihamdihi, ‘adada khalqihi, wa rida-a nafsihi, wa zinata ‘arshihi, wa midada kalimatihi (Allah is free from imperfection and I begin with His praise, as many times as the number of His creatures, in accordance with His Good Pleasure, equal to the ink that may be used in recording the words (for His Praise). (Narrated by Muslim)

Even your shopping can give you a million rewards!

(There is nothing worthy of worship but Allah, He is alone without partner, to Him belongs the dominion and the praise, he causes life and death and He is the Living One and will never die. In His Hand is all good, and He is over all things capable.)

Allah will write for him a million good deeds erase a million of his bad deeds and build for him a house in Jannah.

And in another narration, instead of mentioning that Allah will build a house in Jannah, it states, “and he will be raised one million levels.” (Narrated by At-Tirmidhi)

A third of the Quran in a minute

“Are any of you unable to recite a third of the Quran in a night?”

That was difficult for them and they said:

“Which of us is able to do that, Messenger of Allah?”

Rewards even while chilling

It is reported that

There are many people reclining on comfortable beds and making the Dhikr of Allah on earth. Allah will grant them elevated ranks. (Narrated by Ibn Hibban)

This is because even the luxury and ease did not prevent them from remembering Allah.

Get that house in Paradise! Only a few minutes it takes too

Whoever recites Qul huwa Allah ahad [Surah Ikhlas] ten times, Allah will build for him a house in Paradise. (Narrated by Tabarani)

Give lots of salam to the Muslims you meet!

Imran bin Husayn (may Allah be pleased with him) recounts that once he and others were in the presence of the Prophet when a man came and said:

“Assalamu alaikum”, to which the Prophet responded and said:

Then another man came and he said:

“Assalamu alaikum wa rahmatullah”, to which the Prophet responded and said:

“Assalamu alaikum wa Rahmatullah wa Barakatu”, to which the Prophet responded and said: