The great beauty of iman is that the more actions (done with sincerity) you take, the more you will build strong iman and increase in all the positive emotions that come along with it.
aaa

Often the Arabic word “iman” is translated into English as “belief”. These words are similar in that they are based on an understanding that produces a certain feeling in the believer or one with iman. But the problem with this translation is that the term “belief” in English does not necessitate action.

You can believe in human rights, but still support the suppression of these rights with your actions, your purchases, or even your attitude towards others. In this way you can hold a belief, and also not act on it. In the English language, belief can stand without action.

But in the Arabic language, iman is an understanding or a belief that necessitates action. Asad Jaleel writes:

“[…] iman means committing to a program of action. A Muslim who has iman does not merely believe in Allah, he or she commits to follow the commands of Allah in every aspect of life.”

And the great beauty of iman is that the more actions (done with sincerity) you take, the more you will build strong iman and increase in all the positive emotions that come along with it. God says in the Quran:

He is the one who sent down tranquility to the hearts of the believers so that their faith can be increased upon increase. (Quran 48:4)

To help you evaluate what state your iman is in, answer the following questions with always/ often, sometimes/seldom, or no/never.

1- How often do you remember God?

2- Do you find comfort in remembering God?

Those who believe and on their Lord they rely. (Quran 42:36)

4- Do you feel as if your life has purpose?

And I did not create the jinn and mankind except to worship Me. (51:56) 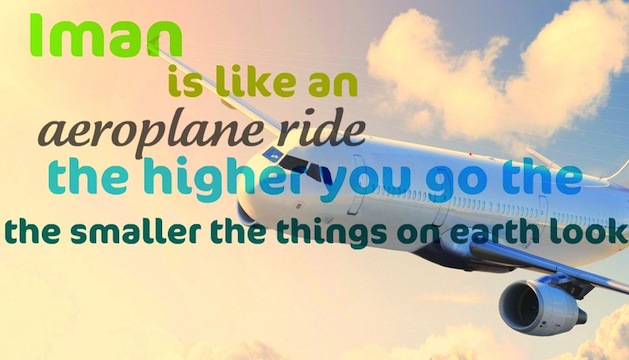 5- Does your heart feel settled?

A person’s faith will not settle until their heart settles.

6- Do you feel remorse even when thinking of a sin?

How excellent a servant! Truly he was ever turning in contrition (to his Lord) (38:44)

7- Are you patient and forgiving?

Iman is patience and forgiveness. (At Tirmidhi)

8- Do you have good manners?

Abu Hurayrah said: “I heard Abu al Qasim (the Prophet), upon him be peace, say:

‘The best among you in Islam are those with the best manners, so long as they develop a sense of understanding.’” (Al Bukhari)

9- Do you act according to the Golden Rule- do unto others as you would have them do unto you?

If you answered “always” or “often” to the questions, then your actions reflect your belief. Congratulations, God has put iman in your heart! Keep up the good work and always do your best to be better. Attaining or maintaining ihsan (excellence) should be your next goal.

It is that you should serve Allah as though you could see Him, for though you cannot see Him yet (know that) He sees you. (Narrated in Muslim)

If you answered “sometimes” or “seldom” to the questions above, then it may be that your iman is a bit low. Don’t beat yourself up about it. This is actually normal. Iman fluctuates. Just do more of what brings you closer to God.

Even the companions experienced fluctuation of iman. The Prophet said:

By Him in Whose Hand is my life if your state of mind remains the same as it is in my presence and you are always busy in remembrance (of Allah), the angels will shake hands with you in your beds and in your roads; but Hanzalah, time should be devoted (to the worldly affairs) and time should be devoted (to prayer). (The Prophet repeated this three times- Narrated in Muslim)

However, if you answered “no” or “never” to the above questions, it is because belief without action is not enough to build strong iman. But this is still not a crisis because we all have the opportunity to increase our iman. All we have to do is more of the actions that please God and bring us closer to Him. The Prophet (PBUH) said:

When we do this, we are rewarded with all the feelings associated with iman: tranquility, peace, assurance, hope, purpose, and so much more.