We glorify Allah by extolling His glory with our tongues. We also do so in our five daily prayers.
aaa

When we say subhan Allah (Glory be to Allah), we are glorifying Allah above any imperfection or deficiency. It is a declaration of His transcendence.

One of Allah’s names is al-Subbuh. This can be translated as “the Most Glorified”. Allah is the One who possesses all glory who has no partner or rival, who possesses every aspect of perfection, and whose actions are all holy and free from evil. He is not subject to the capricious and transient qualities of temporal, created beings.

Prophet Muhammad (peace be upon him) used to call upon Allah by this name while bowing and prostrating in prayer:

Most Glorified, Most Holy, Lord of the angels and the Spirit. (Sahih Muslim 487)

The Quran addresses Allah’s glory in numerous ways and in various contexts. For instance, it commands us:

In this verse, Allah’s glory is mentioned in conjunction with His transcendence.

Everything in the heavens and on Earth glorifies Allah. (Surah al-Jumu`ah 62: 1)

All that is in the heavens and on Earth glorify Allah. (Surah al-Hashr 59: 1)

The seven heavens and the Earth and all they contain glorify Him, and there is not a thing but extols His glory; but you do not understand how they glorify Him. (Quran 17: 44) 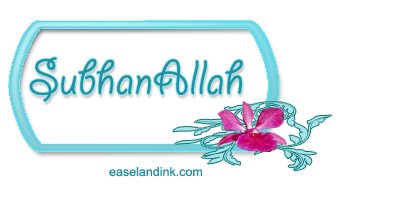 One day, Prophet Muhammad (peace be upon him) departed from his home at dawn to go to the mosque for the Morning Prayer. His wife was offering her prayers in the area of her home where she used to pray. He returned home after sunrise and found her still seated in her prayer area.

“have you been like this since I left you?”

She replied that she had.

“I have uttered four phrases since I left you and uttered them three times. If they were weighed against everything that you have said in supplication since the start of the day, they would equal it: ‘Glory and praise be to Allah to the number of His creations, and to the degree that He Himself is pleased with, and to the weight of His throne, and to the extent of His words’.” (Sahih Muslim 2726)

We glorify Allah by extolling His glory with our tongues. We also do so in our five daily prayers. While bowing we say:

“Glory be to Allah the Magnificent.”

Likewise, while prostrating, we say:

“Glory be to Allah, the Most High.”

In observing these rites of prayer, we exalt Allah’s magnificence simultaneously with our bodies and our words, since we are invoking Allah’s transcendent glory while we are ourselves in positions of utmost humility and subservience to Him.

We see that the Quran refers to our daily prayers as engaging in His glorification where it says: