Allah has sent the Quran as guidance to all mankind. Each and every verse of the Quran has blessings and lessons for us in our daily lives.
aaa

Allah has sent the Quran as guidance to all mankind. Each and every verse of the Quran has blessings and lessons for us in our daily lives.

However, Allah in His infinite knowledge, wisdom, and mercy chooses some over others. Just like He chose Prophet Muhammad (peace be upon him) over all the other Prophets, He chooses some chapters over others. For example chapter Al-Fatihah is the greatest of all chapters, and to be recited every day multiple times in our prayers. Ayat al-Kursi is the greatest verse of the Quran and so on.

Similarly is chapter Al-Kahf. The Prophet (peace be upon him) encouraged us to read the Surah every single Friday. Moreover, he encouraged us to memorize the first ten verses of the Surah because they will safeguard us from the Dajjal (the Antichrist), the worst of afflictions that will hit mankind.

So what lessons can we take from chapter Al-Kahf? There are too many to put in one article. Or dare I say, too many lessons for even one person to extract all of them. Every time we read the chapter, we will find new lessons.

In this article, we will look at the four stories, and extract three daily life lessons for us from each of the stories. There are lots more, but we will keep it to four.

Story 1: The People of the Cave

Youth in worship are particular favorites of Allah

Among the many interesting ways that Allah honored the young people of the cave is by mentioning that they were “fityah” (plural of fata”)- young boys. This is a mention of their youth multiple times. Allah mentions the word “fityah” to refer to them twice in separate occasions to drive home the point that they were young people who worshiped Allah.

Allah loves all His worshipers. But the youth who worship Allah are among His favorites. So much so that in a hadith the Prophet (peace be upon him) said that Allah will give shade to seven categories of people on the Day of Judgement, and among them is a youth who worships Allah. 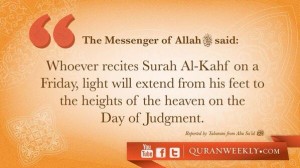 Through different ways, certain trends, precedents and cultures get present in every culture and society. The youth of the cave came from a culture that worshiped idols. And even though they were young people who were more likely to be conscious of their self-image and what people would think about them, they chose Allah over everything else. They did not follow the people blindly but thought rationally.

This is our test as well. We live in societies where many things are norms and cultures, and might not necessarily be right. This is where we need to put Allah first, and not follow practices blindly.

The youth of the cave made du’a to Allah for mercy. They were confronted by an oppressive king who wanted to kill them. And then Allah protected them by giving them sleep for 300 years. Allah ensured that they would get sunlight too by changing the laws of nature. He also ensured that the dog would be kept in such a way that no one would dare enter the cave.

Moreover, Allah would move them from side to side in their 300 year sleep so that their body would keep moving. This is unheard of. Only because of their devotion to Allah did they get such blessed care from Allah. If we want Allah to take care of us, then we need to make sure we become among His favorite slaves by worshiping Him more.

Story 2: The Man of Two Gardens

Arrogance will come back to bite

The man who had two gardens was haughty and arrogant. He was trying to boast about himself and Allah taught him a lesson. He would look down upon other people and reject the truth when his poorer friend tried to remind him of Allah. So he was arrogant to the point that he said that all his wealth shows that Allah loves him. And it came back to bite him.

Arrogance is a disease that one never recognizes but is crushed with later in life. It is important that we recognize if we have this disease in us. The Prophet said that Allah said:

Pride is My cloak and greatness is My robe, and he who competes with Me in respect of either of them, I shall cast into the Hell Fire. (Muslim)

All we have is a mercy and gift from Allah

There are many times that we work to achieve something and we might feel that it is something we have achieved ourselves. That is what this man thought. He claimed that all he had was because of his own goodness.

What we need to remember is that everything we have is a mercy and a gift from Allah. We may put in hard work, but if Allah doesn’t put blessing in anything, nothing succeeds. This is why we should be thankful for what Allah has given us. In fact the Surah itself begins by saying “Alhamdulillah”.

Calamities can be our greatest blessings

The only time the man finally remembered Allah and wished he was grateful was when Allah took it all away. Life is not about how much we have or we do not have. It is about what brings us closer to Allah. That is the true blessing. And that is why Shaykh al-Islam Ibn Taymiyyah said:

“A calamity which takes you closer to Allah is better than a blessing that takes you away from him.”

Other scholars also argue that ease is probably a more difficult test than calamities as people are prone to forget Allah when all is easy.

Be humble in learning

This story is all about learning. Moses (peace be upon him) goes to learn from Al-Khidr (peace be upon him). Moses is unanimously acknowledged to be among the five greatest Prophets to have ever lived. And yet, Moses went to Al-Khidr and asked to learn from him. Not only that, Moses tried to abide by the conditions that Al-Khidr put on him. And when he failed to do so, he apologized.

Moses (peace be upon him) teaches us here the value of humility. In spite of being a Prophet, he was willing to humble himself to learn from Al-Khidr as a teacher.

Attach yourself to pious people

Moses (peace be upon him) is accompanied by a young man on this journey. Quranic commentators say that this boy later grew to be a Prophet called Yusha ibn Nun (peace be upon him). Attaching oneself to righteous people and being with them is among the ways that one becomes great themselves.

Al-Khidr taught Moses multiple things on this journey. Among the things that Al-Khidr did was kill a child who had not done anything.

This must have caused great grief to the child’s parents. However, Al-Khidr said that Allah knew that this child would be oppressive and harsh to his parents later in life. Allah knows that we do not know.

When Allah takes something away from us, we should trust in His Divine wisdom. His Divine Wisdom was not clear to a Prophet, let alone people like us. However, Allah clearly wants good for us, and it is important that we trust the One who has given us everything

Story 4: Teach people to fish, not give them a fish

When the people asked Dhulqarnayn to help them, he did not just go and help them. Rather he taught them in building and helped them himself as well. Rather than just give them what they want, he taught them a skill that they could learn and master themselves. An old saying goes: “Give a man a fish and you feed him for a day. Teach him to fish and you feed him for a lifetime.”

Dhulqarnayn is in stark contrast to the man of the two gardens. Regardless of the fact that he was being victorious and constantly winning new ground for his empire, he never forgot Allah. He was just in his dealings and remembered Allah in all his affairs. That is something we should remember. In our endeavor to earn sustenance, we should never forget Allah. During our successes, we should remember Allah.

Dhulqarnayn could have stopped conquering land or not helped the people. However, he kept going. He would take a path every time he was established somewhere and never resting. And he teaches us never to rest on our laurels and rather do more and more good deeds as much as we can.

These are some of the very few lessons from chapter Al-Kahf that we have shared today. Would you share a few from yourself?

This article is from Reading Islam archives, and was originally published at an earlier date.