Hajj | Recent technological advances are slowly improving wheelchair and EPW technology. Some wheelchairs, such as the iBOT, incorporate gyroscopic technology and other advances, enabling the chair to balance and run on only two of its four wheels on some surfaces, thus raising the user to a height comparable to a standing person.
aaa

Muhammad Al-Sulami earns a living by pushing his wheelchair carrying the elderly and sick pilgrims in the Grand Mosque in Makkah. He has crossed millions of kilometers doing this tiresome but rewarding work in the past 20 years.

Old age won’t deter him from continuing with the work. He still offers his services to pilgrims with a happy and friendly face and does his job efficiently and impressively.

The Presidency for the Affairs of the Two Holy Mosques provides some 12,000 standard wheelchairs for free. But it does not provide people to push the chairs, so visitors either manually power their chair or hire someone to push them.

Speaking to Al-Hayat Arabic daily, Al-Sulami said he and his colleagues walk several kilometers daily carrying pilgrims in their wheelchairs. “Every day I serve two or three pilgrims,” he said while waiting for customers in a queue with his colleagues at the Grand Mosque.

Al-Sulami is acutely aware of the difficult chore. In addition to the physical effort involved in pushing someone in the wheelchair, he faces all kinds of obstacles while cutting through the heavily crowded mataf and masa, where the pilgrims circle the Kaaba and walk between the mounts of Safa and Marwa as part of the rites of Haj and Umrah.

“Overcrowding is the most difficult problem we face while carrying out our job,” said Al-Sulami who wears a uniform like his colleagues. “We encounter problems with other pilgrims when our wheelchairs hit them but we solve the issues amicably,” he explained.

Al-Sulami said the job gave him an opportunity to meet with pilgrims from different parts of the world, some of who held important positions in their country. He considered the period from Ramadan to Dul Haj as the peak season when a large number of faithful visit the Grand Mosque for Umrah and Haj.

The interaction with pilgrims of different nationalities over the years has enabled Al-Sulami to speak different languages and this helps him in his profession.

Between his professional stints, Al-Sulami finds time to meet with his colleagues for small talk. They discuss various matters and exchange their problems and worries.

Al-Sulami said they welcomed newcomers to the profession and taught them how to handle various issues during work. Al-Sulami, however, does not know how the new electronic wheelchair would affect their age-old profession.

Sheikh Abdul Rahman Al-Sudais, head of the Presidency of the Affairs of the Two Holy Mosques, recently inaugurated the first phase of the project for distributing electronic wheelchairs designed according to international standards to sick and elderly pilgrims.

The new wheelchair has been endorsed by the Saudi Standards, Metrology and Quality Organization (SASO) and Saudi Food and Drug Authority.

The move aims to replace old wheelchairs as part of efforts to modernize the presidency’s services to the guests of Allah.

The late King Abdulaziz, the founder of Saudi Arabia, had introduced special chairs for sick and elderly pilgrims in the Grand Mosque with two stout men to carry them. 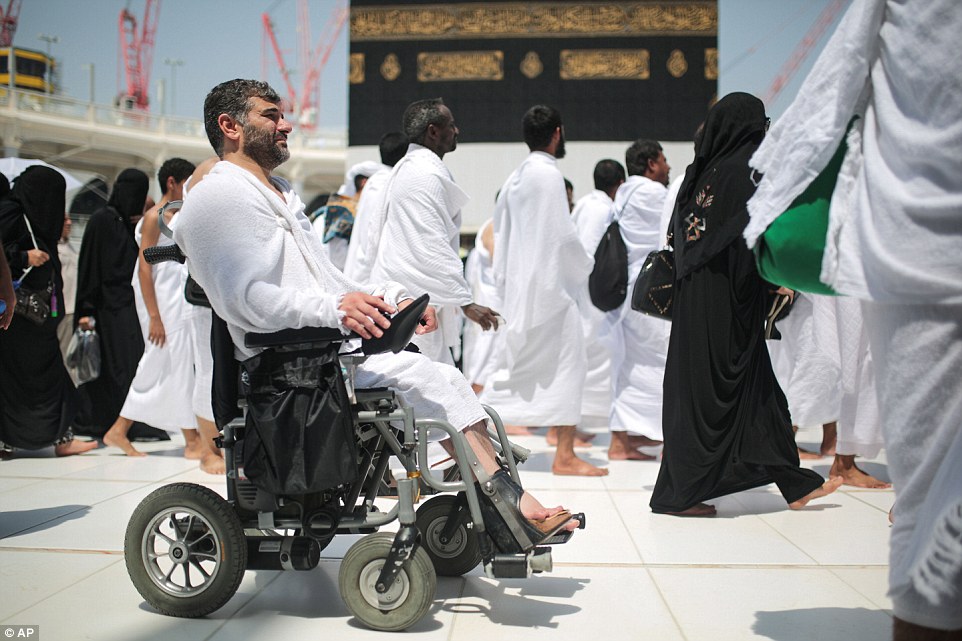 Officers of the Civil Defense Department (CDD) play a significant role in protecting the safety and security of the millions of pilgrims who come to perform Umrah at the Grand Mosque in Makkah and pray at the Prophet’s Mosque in Madinah during the holy month of Ramadan.

The CDD officers work round the clock to fight fire and carry out rescue operations at times of accidents while fasting. They also extend hands of assistance to sick and elderly pilgrims and provide valuable guidance to stranded pilgrims to reach their destinations.

CDD officers said they considered extending all-out support and assistance to the guests of God as their duty. “We feel proud of helping the pilgrims,” one officer said, adding that CDD officers’ services to pilgrims would enhance the Kingdom’s global reputation.

Press photographers have taken pictures of CDD officers carrying sick and elderly pilgrims as well as stranded children looking for their parents. Some of them provide first-aid services to sick and injured pilgrims and guide them to reach their hotels and other destinations.

“We feel extreme happiness while serving the guests of Allah, especially those who need special assistance like the elderly and handicapped,” said another officer. “Our difficulties evaporate when we hear prayers of pilgrims for us and for the Kingdom and its rulers,” he added.

Pilgrims express their happiness and gratitude when they receive special assistance from CDD officers and other security men. They thank the government of Custodian of the Two Holy Mosques King Salman for training its security officers to provide maximum care to the guests of Allah.

“The humanitarian stances of security officers in general and CDD officers in particular have impressed not only pilgrims of different countries but also their leaders and relatives,” said a Saudi media person who requested anonymity.