Healing | Qur'an isn't a textbook of medicine, rather it contains rules of guidance that if followed will promote good health and healing.
aaa

We physicians now accept that healing is from God, and we’re just an instrument of the Healer. We give the same medication to two different patients with the same type of medical problem or perform similar operations on two patients otherwise at the same risk and one will survive and the other one doesn’t. In reality, it’s more than simple luck.

As Socrates put it, “I dress the wound and God heals it.”  This was also acknowledged by Prophet Abraham (peace be upon him): “And when I am ill, it is He who cures me” (Surat Ash-Shu`araa: 26:80). God himself attests to it by saying “If God touches thee with an affliction, no one can remove it but He” (Surat Al-‘An`am: 6:17).

The Qur’an isn’t a textbook of medicine, rather it contains rules of guidance that if followed will promote good health and healing. This is why the Qur’an calls itself a book of healing.

“O mankind, there has come unto you a direction from your Lord and a healing for the heart and for those who believe in guidance and mercy” (Surat Yunus: 10:57).

“We have sent down in the Qur’an that which is healing and a mercy to those who believe” (Surat Al-Israa: 17:82).

Additionally, healing from the Qur’an is of three types:

a. Legislative effect: This includes faith (iman) in God as not only the Creator but the Sustainer and the Protector. This also includes the medical benefits of obligatory prayers, fasting, charity and pilgrimage.

b. Health Guidelines: Health-promoting items from the Qur’an and sunnah. This includes the use of honey, olives, fruit, and lean meat. It also involves avoiding excessive eating, and the prohibition of alcohol, pork, homosexuality, sexual promiscuity and sex during menstruation.

Echo of sound is such a powerful force that blasts off mountains. Now we use the miniaturized version of echo in medicine to break kidney stones (lithotripsy), gallstones, and even vegetations in the subendothelial bacterial endocarditis (SBE).

Listening to the recitation of the Qur’an has been shown in a study conducted by Dr. Ahmed E. Kadi and his associates to lower blood pressure, heart rate, and to cause smooth muscle relaxation in Muslim Arabs, non-Arab Muslims and even in non-Muslims.

It’s postulated that the echo target of “Alif Lam Meem” (the first three words of Surat Al-Baqarah) is in the heart and that of Ya-seen (chapter 36) is in the pituitary gland of the brain.

Thus, the Prophet Mohammad always stressed on Qur’an recitation loudly and not silently by saying, “The comparison between a silent reader and a recitor is like a bottle of perfume when it is closed and when it is opened.”

Use of Meditation in Prayer & Healing

In fact, meditation includes acts of remembrance and communications with God as ordained to us.

1. “When my servant asks you (O Muhammad) about me, (tell them) I am close to them: I listen to the prayer of each supplicant when he asks Me. Let them listen to My call and believe in Me, that they may walk in the right way” (Surat Al-Baqarah: 2:186).

8. “O you believe! Remember God with much remembrance and glorify Him in the morning and evening” (Surat Al-Ahzab:33:41-42).

Sayings of the Prophet Muhammad (pbuh)

The Prophet Muhammad, like all other prophets of God, remembered God most of the time. He said:

1. “There is a polish for everything that removes the rust and the polish for the rust-of- heart is the dhikr (remembrance) of God.”

2. He was asked which people are most virtuous and most highly esteemed by God on the Day of Judgement. The messenger of God (P) replied “Those who remember God often.”

Thus meditation/remembrance has been a practice of all Sufi sheikhs. In the words of Sheikh al-Mursi “dhikr (meditation) pleases God, defeats and drives evil forces, increases livelihood, makes the personality more prestigious, cleanses the heart, removes the faults and saves the tongue from lying, gossip, backbiting and hypocrisy while engaged in the remembrance of God.”

According to Imam Ghazali, illness increases faith and brings man closer to God. Knowing this nature, Qur’an tells us: “O you who believe, seek help with patience and prayers, as God is with those who patiently persevere” (Surat Al-Baqarah: 2:153).

The Prophet Muhammad used to comfort the ill when he visited them and would say the following prayer: “O Allah remove the hardship, O Lord of mankind, grant cure for You are the Healer. There is no cure but from You, a cure which leaves no illness behind.”

He would also make following prayer for his own health: “O Allah cure my body, cure my heart and cure my eyesight from any illness” (repeated 3 times).

Yes they do. Dr. Larry Dossey in his book “The Healing Words” has documented the healing effects of prayer. Citing one example from the research conducted by Dr. Byrd at San Francisco General Hospital in 1988, 393 critically ill heart patients admitted to the intensive care units over a 10-month period were divided into two groups.

Patients of group (A) were prayed for by name until they left the hospital. On the other hand, those in group (B) weren’t prayed for. Byrd didn’t tell those giving the prayers how to pray. In fact, the results were very interesting.

Those prayed for left the hospital early, had a lower incidence of cardiac arrest, 2-1/2 times less incidence of congestive heart failure and required 1/5th less antibiotics.

The research team also observed that prayer combined with loving care worked even better. Men who had angina pectoris and a loving, caring wife, had a 50% reduction in angina than men who were single or divorced.

Prayers work for us even while we are sleeping. The Prophet Muhammad advised us to say prayers from Qur’an (Surah Ikhlas, Al Falaq, Annas and/or last verse of Al Baqarah (2:286) before going to sleep. 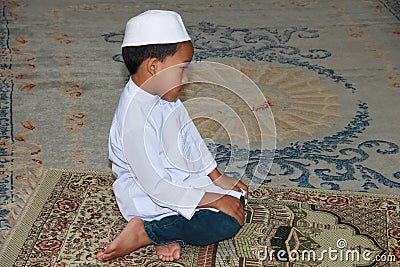 I do dhikr in all my free time. I pray for myself, my family, my friends and my patients by name, knowing that cure is only from God.

Surprisingly, one time I visited a critically ill patient who had an adrenal tumor (pheochromocytoma) and was in hypotensive shock.

I placed my hand over the site of the tumor and made the prophetic prayer and left. The next day when I came, I saw her sitting up in bed smiling.

She told me that in the evening, the radiologist x-rayed her again and found no trace of the tumor. He couldn’t explain it but thought that the arteriogram might have infarcted the tumor.