HOUSTON – American mosques do not meet the prophetic ideal, according to three expert panelists speaking at the 55th annual national conference of The Islamic Society of North America (ISNA) during a panel titled “Realizing the Prophetic Masjid.”

Instead, American Muslims often find their mosques unwelcoming, exclusive, un-dynamic and failing to meet the diverse needs of the community.

Speaker Ihsan Bagby is an associate professor in the Department of Islamic Studies at the University of Kentucky. He said American mosques can make one simple change if they want their place of worship to more closely resemble that of the Prophet Muhammad’s (peace be upon him) – make offering salaams a priority.

“When you walk into the masjid you should feel a sense of community and of welcoming,” he said. He related a story of when he visited a new mosque. He said it took a month before anyone spoke to him or greeted him with “Salaam.”

“This isn’t right,” he said. “We have to make our masjids more welcoming, you need people at the door who give salaam when people come in and when they leave.”

Bagby said the responsibility not only lies with congregants to greet and welcome one another but also to those in positions of authority.

“Leadership has to take it upon themselves to have sermons about it, to make sure they go around to all the different groups (that people create within the mosque) and give salaam,” he said. “They have to create that culture.” 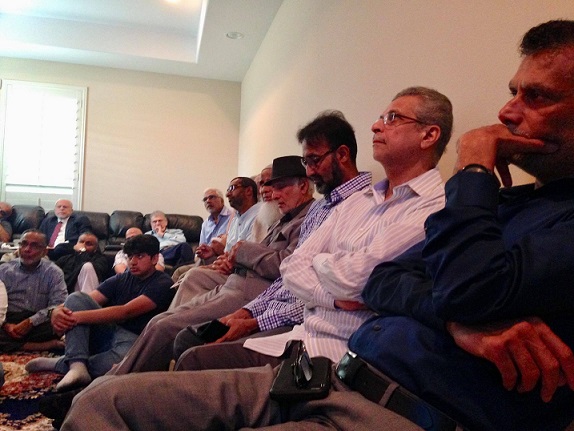 Panelist Dr. Asra Ali, an executive member of ISNA, said she is concerned that mosques in the United States don’t function well for those they seek to serve. She said this is a major problem for Muslims, particularly young people, and could have dire consequences.

“So many people are struggling and they need a place where they can feel at home, especially college students who may be away from their families,” Ali said.

“What they’re seeking is not being provided for them by their mosque, and as a result, they’re finding a peer group that’s outside of the Muslim community.”

She said this is especially true for young professionals. “This is the demographic we’re losing the most.”

However, it’s not just the youth or those in their 20s who are feeling alienated, the panelists said, but many of the diverse groups of Muslims, including converts, women, the disabled and the elderly.

Ali said she’s heard numerous stories of people of all stripes feeling so unwelcome and so unsatisfied with their local masjid that they simply stop going.

“This trend of becoming unmosqued leads us to losing Muslims left and right,” she warned.

So how do we make needed changes to transform American mosques to models of those in which the Prophet (peace be upon him) dwelled in?

Ali advocated for a diverse and inclusive leadership body that represents all of the mosque’s demographics to create mosques that meet the needs of all they serve.

She said an ideal mosque is one where people gather; where women have beautiful, clean and adequate spaces to pray; where different groups receive tailored and inspirational programming; where congregants relax, and where people can discuss and debate community governance.

“The prophetic mosque was the original community center, and we need to go back to that,” she said, adding that women need to be involved if such mosques are going to be a success.

“Let the women speak for themselves,” Ali said. “It shouldn’t be an all-male board deciding what we need and what is a beautiful space for me to pray.”

He said they are suffering from racism, discrimination along economic and geographic lines, and what he termed the “religious police,” all which result in making people feel unwelcome and unwanted.

He said this is not in accordance with Islam. “A mosque is a house of Allah and Allah accepts every person who comes to it.”

Magid said mosques should be places of service, where different people should be called to perform different tasks. He said there should be separate groups to welcome people, to visit the sick, to offer counseling and to perform any other duties congregants need.

He also stressed the important role the mosque can take in catering to Muslim youth. “They need to be places where youth can come and feel comfortable and learn about their Islamic identity.”

Both Ali and Bagby urged people to get involved in the local mosques, in the leadership and decision-making processes.

In particular, Ali encouraged people to develop specific programming tailored to all who walk through a mosque’s doors. She said this is the kind of dynamic atmosphere where Muslims can thrive in their faith.

“Programming is a major thing we can do to be reflective of different groups, even across the broad spectrum of level of practice,” she said.

“We can consider community-service projects, family-based events, and many other things. We need to have something for everyone.”

The 7 Roles of the Mosque