When there is a Miss Muslimah’s pageant’s crown at stake, with a goal of breaking barriers and defeating stereotypes,  the contestants aren’t going down without a fight.

And it was Rahma Mohamed, from Madison, who took home the crown as the new queen.

In an exclusive interview with AboutIslam.net, here is what she had to say:

I would first like to mention that this is not a regular “beauty” pageant! Miss Muslimah USA is all about modesty and inner beauty. Those two values are very central to the faith of a typical Muslim girl which is why, although we truly are allowed to compete in other pageant systems, I wanted to first do Miss Muslimah USA.

The pageant gave me an environment where instead of being quite different from the other contestants, I actually matched the norm. This was my first pageant and when you are in an environment where you have so much to learn about from picking out garments to perfecting your walk, it is always nice to be surrounded by those with a similar background.

How did your family react to the news of winning the pageant?

OMG, this is such a sweet story! My family in the states, Europe, Africa, and all over the world were up all night watching it live. They were on the edge of their seats and the second my name was announced I was flooded with reaction videos of them jumping with joy or crying. It was all such a beautiful experience. I had over 400 messages congratulating me and I truly felt all their support and love for me in a moment where they could’ve decided that instead of being proud of me for winning a pageant, they could have been upset at me as well.

Overall, I was blessed to have support even from the general Muslim community in my state and now people all over the world. 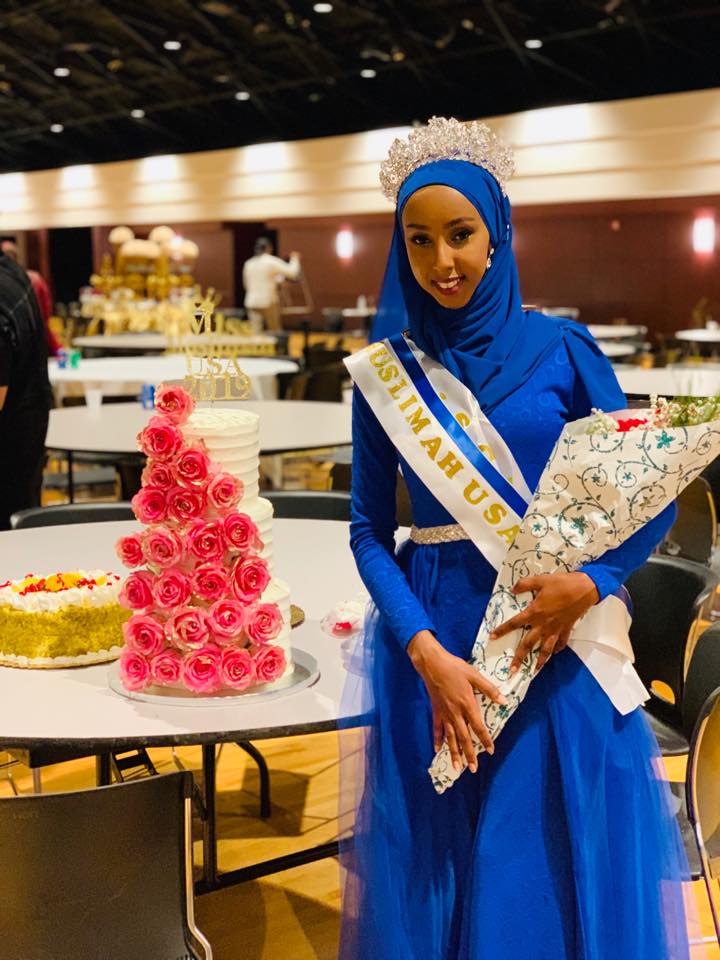 Do you think this pageant empowered you as an American Muslim? Does it affect Muslim women in general?

I was obsessed with wearing my hijab since I was a little girl because I would see my mom wearing it with pride and wanted to be beautiful like her. I would play in my mom’s closet and dig out the biggest, most glittery hijab and would feel like the most regal queen from how it dragged and sparkled behind me. The next day, when I wanted to be Superman, I would run around the house in her bright red hijab jumping on the couches so I would fly.

I only saw greatness in my hijab until middle school. I have been wearing my hijab since first grade, I wouldn’t take a no from my mom. I remember a day in 2nd grade when I forgot to grab it when rushing out the house and felt so exposed the entire school day. My sister and I were the only students wearing a hijab in but did not really feel left out. 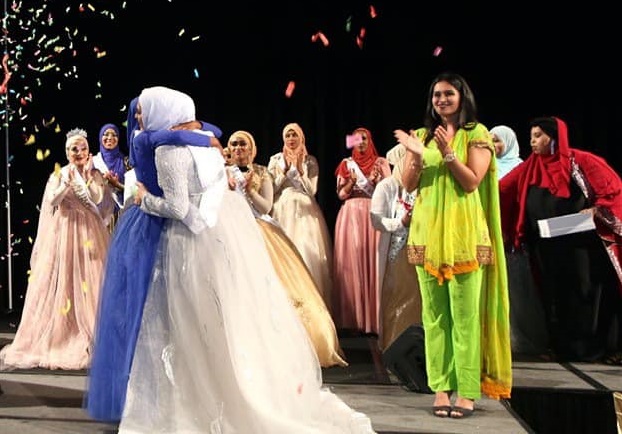 Did you face any challenges for wearing a hijab, and how do you feel now?

Middle school was when the judging and physical assault started. I was called bald, egg head, students even yelled “Allah Akbar” and “cancer” at me. Eventually, it got to the point where my hijab was ripped off my head several times. I would ask myself was there something wrong with me for being different? My answer was always no because I knew there was nothing wrong with my mom and my sister who wear their hijab every day. I realized that all my classmates were so uneducated on the hijab and Islam.

I was always a very social person but early on in my life, I changed my purpose from clueless socialization to meaningful exchange with my peers where I would share the pride and identity I found in wearing my hijab. Everyone was willing to listen and learn. I carried that passion to share what it means when you see someone wearing a hijab when I got my first job when I was 14 and had to advocate for my workplace rights when needing to take a break to pray my 5 daily prayers.

Miss Muslimah USA was another opportunity for me to step forward and share so understanding could come before judgment. By doing so on a national and international platform, I am an advocate against Islamophobia and especially empower Muslim women by in a way normalizing the hijab to the general public. By having the hijab normalized, Muslim women have so many more doors easily open to them because there is an understanding of who you are and what you’re hijab truly stands for. People often fear what they do not know and that doesn’t necessarily come from a place of hate so that’s why I find it so much more powerful to make the effort to show others that they absolutely should not be judging before gaining reasonable information to form an opinion.

Going through the experience, do you recommend it to other Muslim women?

I absolutely do recommend the pageant to all Muslim women! I believe some of the most amazing Muslims around the United States came together to compete. Seeing such strong, accomplished women all competing for the same purpose is really inspiring for everyone. I know that in a way we all won because we achieved our mission of breaking barriers and representing who we fully are beyond how we may be portrayed by others. I am so honored to have gotten to know these wonderful role models and to have formed a strong sisterhood where I know I can rely on my sisters for support anytime. We are Muslim women here to build each other up and any Muslim girl who wants to share our purpose.

Miss Muslimah Pageant USA was founded in 2016 and crowned its first pageant winner in 2017.