Meanwhile, the otherwise vocal President of the United States has so far remained silent.

Confirming American Civil Rights, reassurance instead came from the US Department of Homeland Security who said that it “..fully supports the rights of all to freely and safely worship the faith of their choosing, and we vigorously condemn such attacks on any religious institutions.”

This over-riding holistic approach to freedom of faith parallels both the Quran’s own directive on there being no compulsion in religion, and the Prophetic example in Madinah where focus on the ‘Ummah’ was to ensure that all residents of Madinah, irrespective of faith, would support each other against those who wished to upset their interfaith harmony.

Continuing the support, Democratic Congressman Keith Ellison said, “..we accept and love members of our community, no matter the religion they practice, the language they speak, or where they come from… Hate is becoming too prevalent in our society. It spreads on social media and infects our discourse. We must counter it with love and the values we hold so dear.”

Indeed love is one of the most profound attributes that bring together people of all faiths, a common platform of mutual appreciation.

Yet, relaying his frustration, Mohamed Omar, DAF’s executive director said, “We feel like it’s much deeper and scarier than something random. It’s so scary.” Meanwhile Amir Malik, the civil rights director of the local chapter of CAIR said, “If a bias motive is proven, this attack would represents a long list of hate incidents targeting Islamic institutions nationwide in recent months.”

Doubt and unease, for any community, is an affront to the values of fairness and justice, and it is only with continued dialogue and community outreach that these can ever be overcome.

CNN report that from the start of this year, there have been 63 reported incidents “where mosques were targets of threats, vandalism or arson.” That is at least two incidents a week.

The Huffington Post, sadly, adds that “Trump has yet to offer a word of condolence or comfort to American Muslims, who are concerned about their place in society and the safety of their places of worship.”

American commentator Wajahat Ali expressed his worries on Twitter writing, “Let’s say someone yelled Allahu Akbar while throwing an IED bomb into a populated church in Minnesota. How would President Trump respond?”

The apparent indifference shown by President Trump  as a leader when the target of terrorism is Muslims, vs non-Muslim targets, is becoming far too regular. And while it will not unseat the dedication and devotion of American Muslims, the vast majority of whom are extremely patriotic and well integrated members of American society, it isn’t a nice feeling for your political leader to display such indifference. 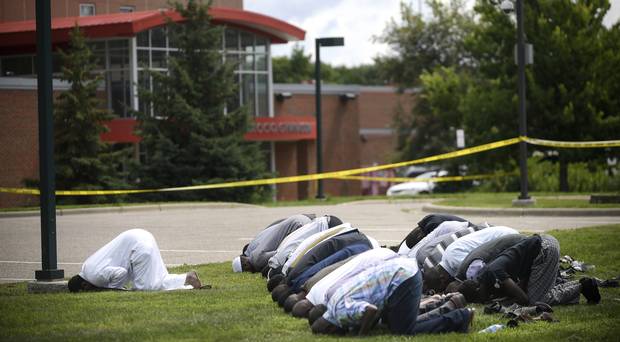 Thankfully, religious leaders have stepped in to fill this void.

Steve Hunegs, from the Jewish Community Relations Council of Minnesota, said, “..I join other faith leaders at Dar Al Farooq to express our support and sympathy to our Muslim neighbours…” adding that he remembered how the Muslim community supported the Jewish community when Jewish community centers were being threatened earlier this year.

Madihha Ahussai, a lawyer with Muslim Advocates, said, “Every American has the right to go with their family to services of their chosen faith, but the current climate makes many religious groups, including Muslims and Sikhs, fearful of doing that.”

So it seems that local, regional and national politicians and religious figures have all banded together to support one another to live their lives as outlined by the American Constitution.

Inter-faith harmony already exists and will only strengthen as all communities view a criminal acts against one, to be an attack against them all, and so support one another.

If we ever needed to see an example of Prophet Muhammad’s Constitution of Madinah in our modern age, it is there in the United States, as well as here in the United Kingdom, where freedom of faith is a cornerstone of our respective societies.

And while we, in the United Kingdom, have the good fortune of a Prime Minister, Theresa May, who will speak out against attacks targeting Muslims, just as she would speak out against attacks targeting non-Muslims, we all wonder how long it will be before President Trump affords the same reassurance to his nations citizens: that an attack against any American – irrespective of race or faith, is an attack against them all, each deserving the same level of criticism.

In his speech at the Arab Islamic American Summit in Riyadh earlier this year, President Trump said, “Our vision is one of peace, security and prosperity – in this region, and in the world. Our goal is a coalition of nations who share the aim of stamping out extremism and providing our children a hopeful future that does honor God.”

These are words most of us will agree with, but until the President speaks out when American Muslims are also targets of terrorism, these sentiments, no matter how refreshing and beautiful, will continue to be just words, and we must go beyond words.