According to Pew Research, two-thirds of the American born-Muslim population are converts. The religion continues to grow in the United States despite anti-Muslim social and political rhetoric or the targeting of Muslims in public spaces.

In “The Unheard Voices,” a Young Muslim Conference Workshop, Mexican American Nahela Morales and African American Ustadh Iesha Prime shared their entry into the face with the audience.

“My introduction to Islam was actually 9/11.  [It] is what made me go but a Qur’an and study this deen.  I was a very angry American. I am an immigrant, but I came here at the tender age of four, so I consider this my country.”

Morales explained that she studied Islam for years before converting. 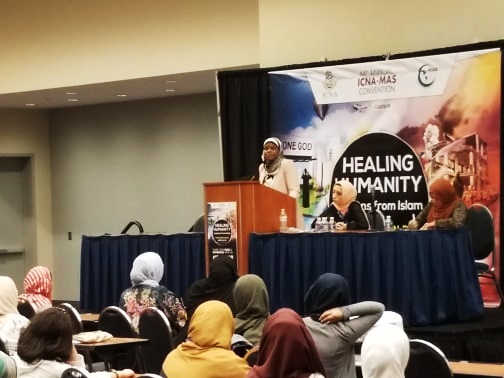 Ustadh Iesha Prime was traveling North Africa when she became drawn to Islam.

“I was a youth ambassador to Morocco and Senegal,” explained Prime. “I arrived in Senegal. I was just about to fall asleep [from] jet lag. I was between that state of sleep and [awake] when the adhan went off.

When the adhan went off, I felt my heart go woof, like I had taken my first breath.”

Kenneth Misurella described a similar experience with the Qur’an when she shared his conversion story during the “Inspirational Reverts Stories” session.

“When it was explained to me we only believe in…worship…and turn to one God. The universal message of one creator sparked something in me. It piqued my interest, and I was not religious by any means. Something hit me. I was like, ‘This made sense.”

Misurella told the audience he studied Islam for a year and hearing the Qur’an being recited in Arabic profoundly moved him.

“I remember this one moment when I truly believe that I actually started believing in Islam. I was sitting there, reading my translation, and the surah I heard was Surah Ar-Rahman.”

I just stopped, went to the computer, closed my eyes and started listening. I just felt completely at peace. It was a feeling I never truly experienced before in my entire life.

Turnisa Masidik, Imam Danny Salgado and Gena Chung joined Misurella on the panel of reverts inspiring convention goers with their stories of epiphany and spiritual discovery. 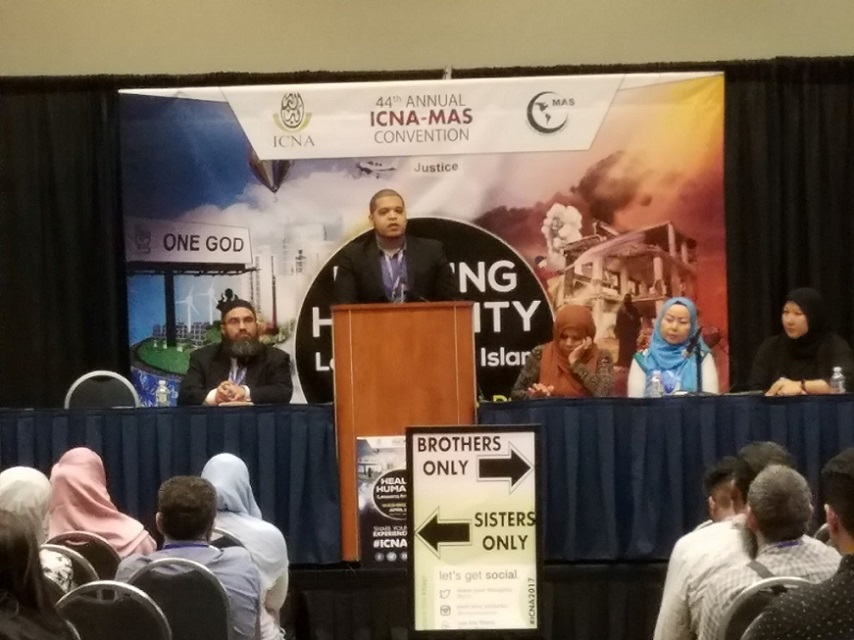 Becoming Muslim is the beginning of a life journey that requires communal support. Morales talked about challenges many US Muslim converts face and the need for more support.

“Studies show that many converts leave [Islam] due to a lack of belief but more so, lack of acceptance and communal supports,” said Morales.

Converts find themselves marginalized from their local mosques, Muslim council, leadership, and the greater Muslim community.

She described her struggles with loneliness and isolation she felt as a revert after all of the fanfare over her conversion faded.

“I converted in a masjid that was predominantly Palestinian, Egyptian and Moroccan.  [Being] from a Mexican background and not speaking the language, I often found myself feeling lonely.”

I embraced Islam [on the] last day of Ramadan. The masjid was packed to the max. When I took my shahadah, there were hundreds of people. Sisters came and threw duas, phone numbers, kisses and slobbers—all of that good stuff.

The next day, we had Eid-ul-Fitr. Do you think any of those sisters remembered who I was? No.

It was the loneliest [and saddest] day of my life. I started questioning myself. I knew no one.”

Morales explained that her isolation prompted her to co-found EMBRACE, an ICNA project that provides support for Muslim reverts.

“I went around the world conveying the message of Islam. I was in Sweden, and we had a shahadah. I was in Columbia, and we had seven shahadahs, and I went to Mexico and more shahadahs—so many shahadahs.

Then I [came] home, and I always wonder and feel a heavy heart. What happened to those shahadahs? Who’s taking care of those brothers and sisters who Allah has guided to this deen?

That’s why my fellow colleagues and I, all converts, decided to embark on this new journey with ICNA, and we founded EMBRACE. When we [new Muslims] embrace Islam, we are hoping that you are embracing us as well.