JEDDAH – Orienting would-be pilgrims with the hajj rituals, virtual reality applications have been growing in popularity recently among pilgrims, as Muslim developers hope to help first-time pilgrims as well as educating non-Muslims about Hajj.

“We believe it’s a powerful tool that acts as a guide for people doing pilgrimage for the first time,” explained Wael Ramadan, the chief technical officer at Cairo-based Vhorus, the Egyptian company behind ‘Experience Makkah’ and the first Muslim developer to offer an app on Oculus VR store, Salaam Gateway reported.

“We also want to shatter stereotypes of how Muslims are portrayed in the media.”

The first Hajj Hackathon which concluded last week highlighted several technological solutions for the demands of the Hajj season. Yet, a handful of Muslim developers have been already capitalizing on virtual reality (VR) technology in smartphone applications to

Experience Makkah was conceived by Ehab Fares, Vhorus chief executive. The app provides an interactive experience in which the user can walk around Makkah in VR, interact with informational podiums and get an audio reference on the stories behind historical sites.

The Egyptian application ‘Experience Makkah’ has been downloaded more than 180,000 times since its release in April 2016.

This year Hajj will officially take place between Sunday, August 19, and Friday, August 24.

Hajj consists of several rituals  meant to symbolize the essential concepts of the Islamic faith, and to commemorate the trials of Prophet Abraham and his family, may Allah’s peace and blessings be upon them. 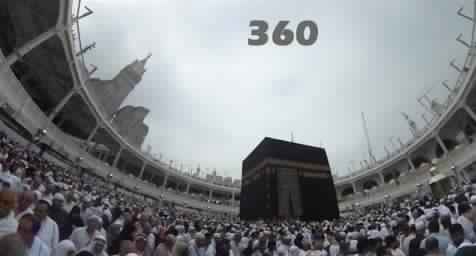 Another app was released in August 2016, Manasik VR, to provide a first impression of Makkah for newcomers.

“It’s not the [high] figure you would expect for a mobile app, but since Manasik is designed for VR, we have no other case to compare it with. Looking at market penetration, it’s a positive figure for our beta product,” said Fahed Mahidi, software department manager at Saudi Arabia’s Zad Group, the developer of Manasik VR.

A similar VR app, launched in 2014, is Makkah 3D which was initially developed by Brainseed Factory and has now moved to Bigitec, a Germany-based company.

“Think of Makkah 3D as a living virtual museum. All aspects of Islamic lifestyle and worshipping rituals will be accurately represented and taught in a sophisticated 3D environment,” said Bilal Chbib, the founder and managing director of both Brainseed Factory and Bigitec.

These apps aren’t alone; encouraged by the sheer number of pilgrims and business opportunities to serve them, the hajj VR segment is still attracting new players.

Another company from Tatarstan hopes to tap the market is Miradj360 VR. “People who want to go for Umrah or hajj usually apply through specialized agencies and rely on brochures supplied by those operators to get the knowledge they need,” informed Ruslan Sabirzyanov, co-founder of Miradj360.

The Tatar company is also developing a business version for haj operators to use with their customers, without the need for an internet connection.

“What we want to bring to people isn’t only knowledge, but also the chance to see how things are in reality. Because many people when arriving there get so emotional that they just forget whatever they learned. Our app will help them to visualize how things will be,” said Sabirzyanov.