The 3 countries of Tatarstan, Circassia, and Chechnya are the first Muslim nations to host the World Cup.
aaa

The 21st FIFA World Cup, which lasts till July 15, still dazzles the world with its record-breaking goals and statistics. It’s also the first World Cup where video assistant referees (VARs) have been utilized.

However, these aren’t the only unique aspects of this world biggest sports tournament, trailing only the Summer Olympics. The 2018 football World Cup is currently being held in three Muslim nations for the first time in history, thus providing the teams and their fans a rare opportunity of being exposed to the Muslim cultures and traditions

With their six cities playing host to the World Cup teams, Tatarstan, Circassia, and Chechnya, part of the Russian Federation, are the first Muslim nations to be honored for hosting this international sports festival.

Tatarstan was ready for the major tournament with Kazan avenue in its capital city. In addition to camps of teams in Yuğarı Oslan town.

On the other hand, Circassia participates in hosting the quadrennial competition by an avenue in its capital city Sochi. This is in addition to camps in the resort towns of Sinda Anapa and Gelendzhik.

Qolsharif Mosque in Kazan, the capital of Tatarstan.

Tatarstan is a landlocked Muslim republic that lies at the far easternmost side of Europe. It’s also one of the northernmost countries of the Islamic World.

Islam was by far the most dominant religion in Tatarstan since the 10th century. Unfortunately, that has decreased now to an estimate between 33.8% and 55% due to the Soviet occupation.

Circassia is a Muslim Russian republic located at the Northwest Caucasus in far southeastern Europe, lying at the northeast coast of the Black Sea.

According to Britannica encyclopedia and the 2010 Census, Circassia had a population of over eight million people. Less than third of this population live over an area of about 190,000 km². The rest of the Muslim Circassian people were forced to flee the country in 1864. 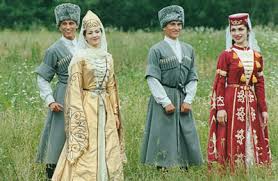 Circassia’s major religion is Islam since 15th century. Yet, the Muslim population has decreased now to an estimate between 5% and 20% due to mass deportation of Circassian Muslims orchestrated by the colonizing Russians.

Chechnya is a Muslim republic that is found in the North Caucasus at far southeastern Europe. It had a population of 1,268,989 people over an area of more than 20,000 km², according to the 2010 Census.

Chechens started to convert from paganism to Islam in the 15th century making it the major faith in this Caucasian country.

Nowadays, Chechens and Islam represent 95.3% of the total population in Chechnya.