MAKKAH – Pouring in from across the world,  thousands of pilgrims have started arriving at the holy city of Makkah and preparing for the lifetime journey of hajj, set to start on August 19.

Muslims come to Makkah every year to perform hajj, one of the five pillars of Islam.

Hajj consists of several rites, which are meant to symbolize the essential concepts of the Islamic faith, and to commemorate the trials of Prophet Abraham and his family, may Allah’s peace and blessings be upon them.

Following in the footsteps of Prophet Muhammad (peace be upon him), the first leg of their five-day journey starts on Sunday, August 19, with a slow trek to Mina.

On Monday morning, August 20, the pilgrims will descend on the site of Mount `Arafat where Prophet Muhammad (peace and blessings be upon him) delivered his last sermon more than 14 centuries ago.

They will take part in the symbolic stoning of the devil at Jamrat Al-Aqaba and sacrifice animals to mark the four-day `Eid Al-Adha, set to start on Tuesday evening, August 21.

According to astronomical calculations, the new moon of Dhul Hijjah is on August 11, 2018 (Saturday) at 9:58 UT. This is when solar eclipse occurs. On August 11, the moon cannot be seen in most of the world, except possibly with difficulty in Polynasian Islands. On August 11, by telescope it may be seen in Americas but based on past experience it is unlikely. On August 12, 2018 (Sunday), this moon can be seen in almost the whole world. 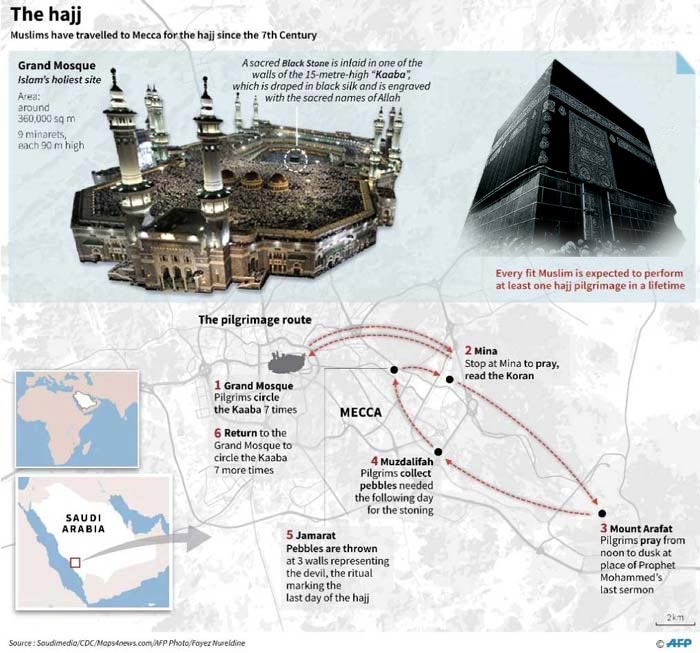