“Being a Hijabi, and a Muslim, in general, puts you under a microscope. Every move you make is being watched and judged.”

Though Jumana El-Hamdoon and Khadija Meziane are not even teenagers yet, both Muslim girls have experienced the weight of being a Muslim in Britain, My London reported.

As they both wear hijab, a choice they made themselves, the girls have been shouted at in the public by strangers.

“This story is just a simple example of some of the things that Muslims endure on a daily basis,” Jumana said.

The 11-year-old girl was telling her story during Visit My Mosque Day in the Feltham HIRA center on Hounslow Road.

The national initiative sees Muslims open the doors of their mosques and encourage visitors to come and look inside and learn about Islam.

“We need to remove barriers. We need to build bridges, not walls. We need to get to know each other, and we need to appreciate diversity,” she said.

“An event like today goes a long way in achieving this, and we hope that we continue to educate each other.”

Though harassed because of wearing the hijab, both girls believe it’s empowering them.

Jumana agreed: “It is about modesty and religion, but I do also feel, and I’m pretty sure lots of other hijabis out there, feel like it’s part of your identity.

“I don’t really know if I took it off now where I would be, I would just feel so uncomfortable all the time if I didn’t wear it. 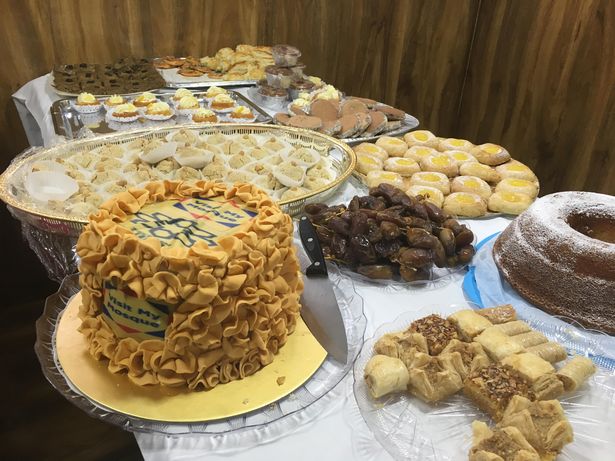 Members of the community put on a feast

With henna artists, children face painting, mountains of traditional food, cake, and tea, the open mosque event in Feltham was like a wedding party.

Fouzi Saffar, one of the trustees at Feltham, said she had been decked out with information boards and displays for visitors to read about Islam.

“That’s the purpose today,” he explained. “To open the mosque for people to come in and have a look, see what it looks like inside, how we pray.

“It’s for people to look and learn and ask questions. We find that there are many ambiguities and misunderstandings.

“The only way that you can clarify these is to open the doors and break the barriers so people feel at ease here.”

This year, over 250 Mosques across the UK opened their doors to visitors on March 3rd as part of the Muslim Council of Britain’s Visit My Mosque open day.

The event was deemed very important to connect people together after a YouGov poll carried out last year found that 70% of Britons have never visited a place of worship other than their own.