MANCHESTER – Muslim women feel their voices are being overlooked and their intellectual input sidelined by the feminist movement.

An increasing number also report an atmosphere of abuse legitimized as ‘comment’ on social media from women asserting that a feminist agenda allows or even demands condemnation of Islamic values in relation to marriage, the home and of course women’s modesty.

This, according to leading voices in women’s organizations can have a negative impact on the willingness to access essential services such as domestic violence units.

“UK Feminism, Spirituality And Faith” a groundbreaking conference sought to shed light on the way in which the movement interacts with Muslim women. At the Quaker Friends Meeting House,  Manchester, the Muslimahs support organization Apna Huq (Your Right) joined forces with the black (secular) feminist organization Imkaan to host a workshop to this under explored topic.

The Director of Imkaan is the highly charismatic community activist Marai Larasi, MBE.

Larasi addressed with candor her own efforts to understand how faith and women’s rights can work in tandem, an issue she has struggled with both personally as the secular child of a Christian preacher and professionally, as Director of a faith-free feminist organization.

“Women often have to suppress their expressions of faith in order to engage with the feminist movement. This is troubling for me,” Larasi told Aboutislam.

The struggle for equal rights by state and family have appeared primarily to be a movement dominated by a white, western attitude and agenda. The media focus on this (relatively small) version of women’s rights, has given feminism the appearance of having both a specific skin tone and a political, secular, dynamic.

At the same time, in recent years, it has become the ‘new normal’ for women who decry or reject Islam to be adopted as feminist icons. In 2005, Time magazine named Ayaan Hirst Ali, the former Dutch politician, as one of the 100 most influential people in the world.

Hirst Ali described in the right wing media as ‘an escapee from an abusive patriarchy’ described Islam in a 2007 interview, as an “enemy” that needs to be defeated before peace can be achieved.

Her anger is understandable, Ali’s feminist ideology comes via a cultural background in stark contrast with the liberal humanist traditions shaping women’s rights in the West. Hirst Ali suffered FGM – an entirely misogynistic cultural, but not an Islamic, practice.

In the UK, Saira Khan of Inspire is the darling of the media with links to the government’s loathed Prevent (anti-terror) strategy. Khan just this week admitted live on TV that she had suffered sexual abuse from an uncle in Pakistan, a traumatic experience for anyone.

Khan’s latest book ‘The Battle for British Islam’ has been described by one Muslim website as little more than a ‘250 page Prevent press release.’ Both women are seen as symbols of how Muslim women can be ‘saved’ once they reject and criticize their faith. 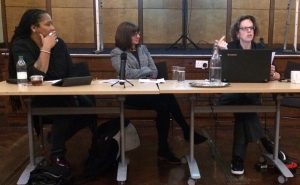 There are however, a far larger number of women who, whilst experiencing abuse by men in one form or another, do not feel compelled to blame or to leave their faith.

They want to contribute to current debates about freedom and equality. It is these women and Muslim women of course, who live in perfectly happy marriages and homes – who may find themselves at best patronized and at worst victimized by feminist mainstream culture.

The UK government’s recent focus on Islamic Shari`ah Courts in the UK, has been a case in point. Larasi calls a large part of the feminist response to news on this topic, “Painful and polarized.”

To a room overwhelmingly filled by hijab-wearing Muslim women, she talked bluntly of an ‘unveil and rescue’ undertone which needs to be challenged. When such knee-jerk responses occur, Larasi recognizes the old imperial narrative at play.

The requirement for Shari`ah courts to be scrutinized was not the lead topic, but the way the debate has played is an example of the way in which Muslim women are expected or ‘allowed’ to respond to such issues within the feminist discourse.

A controversial figure for many traditional voices in the Muslim community Gohir embraces the label ‘Muslim Feminist’.

She has called for the ‘monitoring’ of Shari`ah Councils to ensure good practice. As a result of this statement, she found herself at the sharp end of feminist backlash from women who felt her views on her community and her faith were too soft.

“I have been routinely called an Islamist on social media. What I’ve noticed is most secular feminists will support faith feminists. But there is a small, growing number who are becoming anti faith and anti-Islam.” 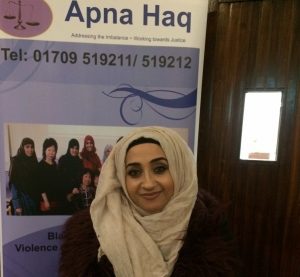 More widespread is the whiff of hypocrisy in the stop-start support Muslim women at this conference expressed in manner of support on offer by secular feminists and advocacy groups.

Whilst solidarity is apparent for women fleeing say marital abuse, the silence when issues such as the French ‘Burkhini Ban’ come up is little short of deafening.

Polly Neate is the award-winning journalist and prominent commentator on both violence against women and feminism. As Chief Executive of Women’s Aid, she takes the discomfort Muslim women may experience when they interact with secular organizations, seriously.

“Survivors of domestic abuse are not all going to be feminist atheists. In fact most will not be.’ She said. Neate Warns that services for women must avoid being constructed ‘in our own image’. Namely, white, eurocentric and secular.

In practical terms, this means women from the Muslim community in need of vital support at a time of ongoing trauma must have access to spaces which do not ‘contribute to the dismantling of their identity.’ A process already under way through abuse experience.

Zlakha Ahmed MBE is the women’s rights campaigner who set up Apna Huq 22 years ago.

It is Zlakha who has had the foresight to bring women from different campaign groups together to tackle a new, subtle form of prejudice.

Although she still feels awkward in raising  issues related to spirituality with friends in the feminist movement, she is hopeful conferences and dialogues like this one will remove the uncomfortable suspicion that feminists feel they are the new (and unwanted) guardian’s of Muslim women and our rights.

In the current climate, the last thing Muslim women need is a choice between silence or condemnation from a feminist movement whose rhetoric at times can be eerily resonant of the right wing abuse prevalent in other parts of society.

As the first session drew to a close, Hafsah Bashir, a writer and spoken word artist with an MA in Postcolonial Literary Culture delivered her poem ‘The F Word’ (F for Feminist). The final lines drew united applause from the Muslim and secular audience summing up the conference feel.