MAKKAH – Who knew that Mahmoud could be spelt so many ways in sign language? I was learning the names of the hearing-impaired boys as we drove to Masjid Aisha, Masjid at-Tan`eem, which lies on the outskirts of the Holy City of Makkah.

There, those of us who had already made our first Umrah would re-enter the state of Ihram by making a new intention to complete the pilgrimage and praying two rakat. In the literal sense, Ihram means entering into a sanctity that cannot be broken, a state in which certain actions are not permissible.

Typical children on a trip, the boys just want to mess about on the bus. So, I am shown that Mahmoud with the huge eyes, signs his name as if stroking long hair at the back of his head, whilst Mahmoud, who is almost able to grow a beard, makes a scar sign across his right eyebrow for his name.

Keeping four hundred excited boys together at night, in an area crammed with more than a quarter of a million pilgrims, dressed identically, is not easy. Luckily, their guardians on the trip are community organizers, who know just what to do – and who to keep an eye on.

One hundred meters from the Haram, the children are lined up in rows under a flyover blazing with floodlights. In a voice fit for a sergeant major a youth organizer shouts:

‘What is your faith?’

Fifty orphans snap their legs together and arms by their sides yelling, proudly, at the top of their lungs

‘Who is your Lord?’  The boys stamp their legs apart, new recruits on parade.

‘Who is your Prophet?’ Feet snap together.

‘Muhammed Peace Be Upon Him!’ 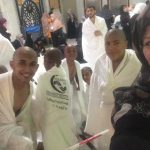 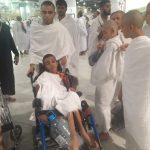 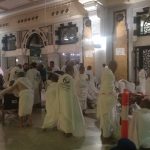 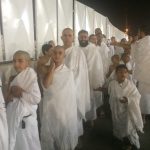 Muslims on their way home after a beautiful day of devotions cannot resist the sight and stop to ask the boys who they are and why they in a group. When the word ‘orphan’ reaches the ears of the mothers present with their own children, tears flow. It is a special term for Muslims.

The Holy Qur’an mentions the word ‘Yateem’ (orphan) more than twenty times. The term applies to a child who has lost either both parents or their father. This is because of the stress and hardship afflicted upon a single mother’s household, both emotionally and financially, by the loss. Prophet Mohammed had an especial affinity with the state of the orphan having lost both his parents by the age of just six.

“Serve Allah, and join not any partners with Him; and do good- to parents, kinsfolk, orphans, those in need, neighbors who are near, neighbors who are strangers, the companion by your side, the wayfarer (ye meet), and what your right hands possess: For Allah loveth not the arrogant, the vainglorious;” (Surah An-Nisa, 36)

The Kaa`ba by day and night radiates its own generous energy, I am tired, but each pilgrim brings with them weighty pleas we have to make, not only for ourselves, but others.

Tamir takes my hand. He is 10 years old and doesn’t speak much. He is shy and knowing I don’t speak Arabic communicates with me using smiles and eyebrows. Like many of these children, he was born into poverty.

Jerash camp was set up as an “emergency” camp in 1968 for 11,500 Palestinian refugees fleeing the Israeli invasion of the Gaza Strip in 1967. The ramshackle slum was never intended to be a long term housing solution. Known locally in Jordan as Gaza camp, it covers an area of less than a kilometer. Today it is the crushing, crumbling home of more than 40,000 refugees.

On our third time around the Kaa`ba, I am muttering a prayer for displaced families and nations.

“Ya Allah Syria, Ya Allah Yemen, Ya Allah Falasteen (Palestine), Libya, Rohingya..’ and on and on. I am breathless with the need to ask for justice, an end to war, a change in the condition for fifty million people globally.

Tamir, from Gaza camp, squeezes my hand. He looks up at me with an expression of complete concern for the suffering of others. Beneath the glow of the Kaa`ba, he whispers a small word which threatens to take my legs from beneath me. A word that strikes at the heart and which Allah SWT guarantees to answer out of love for the orphan.