MAKKAH – I am headed towards the most holy site in the Islamic faith, the Kaa`ba in Makkah, Saudi Arabia. Just fourteen days ago, I had no idea this honor was written for me.

A single text invited me to join Palestinian and Syrian orphans and refugees, some with disabilities, on their trip of a lifetime: pilgrimage to Bait ul Haram, the honorable house. The journey has been organized by the charity Islamic Help who run an annual program called Umrah for Orphans.

The boys with disabilities flew from Amman to Jeddah in their first journey outside their refugee camps. I sat with Ali and Ibrahim, who are deaf. Hands fluttered messages to one another at take off, the widening eyes and bright smiles making me laugh with them.Now, the children rest after the coach journey to the holy city of Makkah. The place where Prophet Muhammed, peace be upon him, first gave news to his close family and friends of a return to the monotheism preached by his Prophetic ancestor, Abraham, Ibrahim.

For the first episode, please check:

Before accepting Islam, I read that, ’Muslims pray to a stone in the desert.’ I remember thinking how strange and pagan-like that made their faith.

The truth is both very different and subtly different. For example, It’s true five times a day 1.5 billion Muslims should pray in the direction of this place, whose heart is a brick building covered in black cloth. The first direction of prayer for the Muslims was not here though. It was Al-Quds (occupied Jerusalem).

From Doubt to Belief 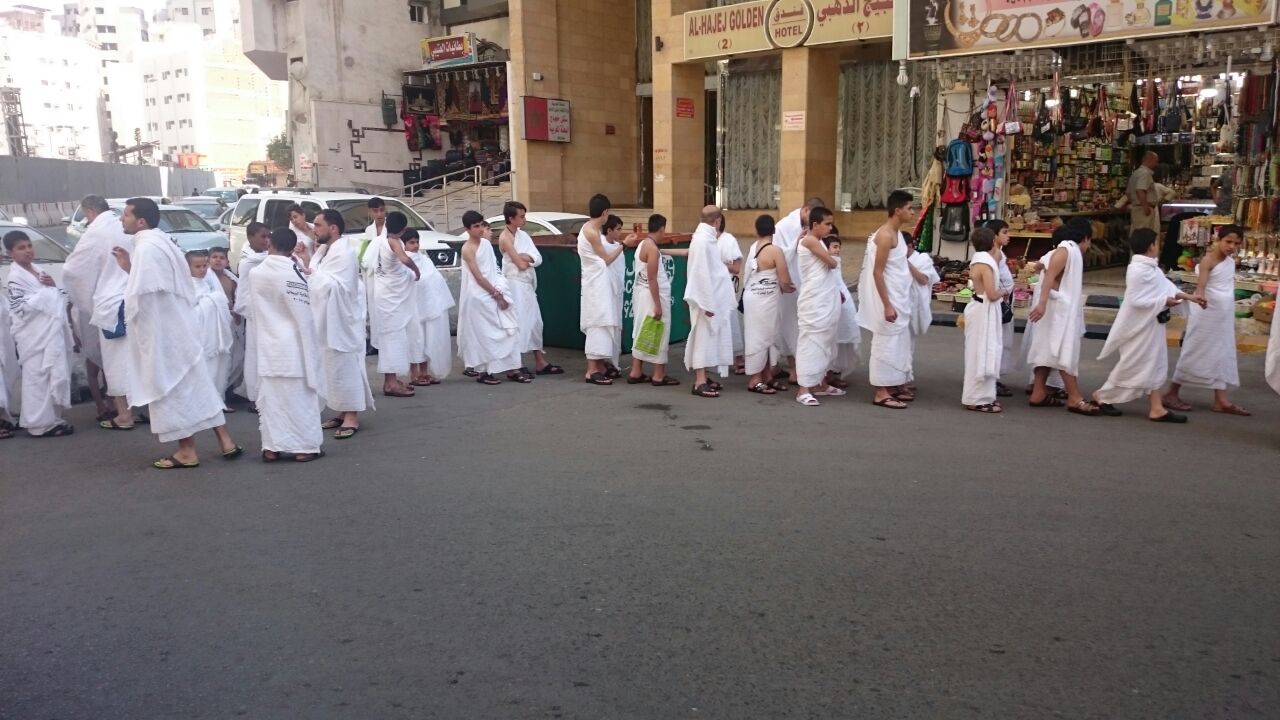 From ancient times, Makkah had been an important place of pilgrimage for people across the deserts of the region. They had lost its original monotheistic purpose and over time it had become a place of pagan worship with 360 idols surrounding the already standing square building.

As the messages received by Prophet Mohammed (pbuh) grew into a lexicon of knowledge, A verse of the Holy Quran ordered he and his early companions to turn from Jerusalem in prayer and towards the holy site in their midst.

“We have certainly seen the turning of your face, [O Muhammad], toward the heaven, and We will surely turn you to a qiblah with which you will be pleased. So turn your face toward al-Masjid al-Haram.” (Surah al-Baqarah, 2:144)

Later, the intention for this was made clear when it was revealed that:

“For every nation there is a direction to which they face (in their prayers).  So hasten towards all that is good.  Wheresoever you may be, God will bring you together (on the Day of Resurrection).  Truly, God is Able to do all things.  And from wheresoever you start forth (for prayers), turn your face in the direction of Al-Masjid-al-Haram (at Mecca), that is indeed the truth from your Lord.  And God is not unaware of what you do.” (Qur’an 2:148-149)

So the Kaaba is indeed a focal point. But, it’s not an object of worship in itself. It’s also true that there is a stone inside the Kaaba which is black.

It was narrated that the Messenger of Allah (peace and blessings of Allah be upon him) said: “When the Black Stone came down from Paradise, it was whiter than milk, but the sins of the sons of Adam made it black.”(Narrated by al-Tirmidhi, 877)

According to tradition, the stone was set whole into the Kaa`ba’s wall by the Prophet Muhammad (pbuh) in 605 AD, five years before he received the first revelation. Today it is cemented into a silver frame in the side of the cubed building. It is a fragmented piece of dark rock, polished smooth by the hands of millions of pilgrims. Scientists believe it to be part of a larger meteorite. 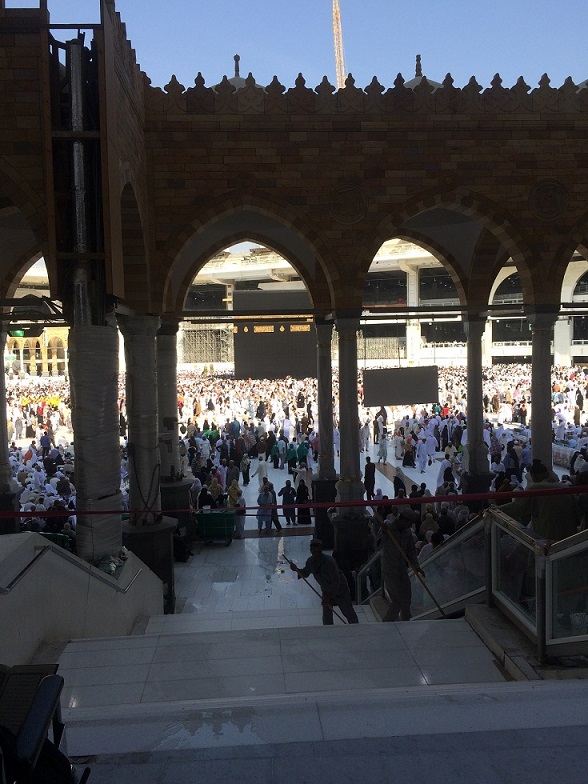 But do Muslims pray to it? Am I about to enter a ritual where I will ask; ‘Oh magic black stone from the sky, give me such and such?’

Dusty, solid rock mountains roll into an endless blue sky, yet the heat, thankfully, is an oddly, ambient-feeling, 30 degrees. With hundreds of other pilgrims mostly from Asia and the Arab world, I stop just outside one of the imposing doorways and remove my shoes.

Then I am inside at last. Home.

My tongue trembles the Arabic words pilgrims have been saying on pilgrimage to this holy place for 1438 years, in English these translate as:

O my Lord, here I am at Your service, here I am. There is no partner with You, here I am.

Truly the praise and the provisions are Yours, and so is the dominion and sovereignty.

There is no partner with You.

You see it’s not the rock that brings Muslims here, but the love of One God. Our utter reliance on Him, the realization of the forgotten or ignored truth, which humbles the limbs, until we can barely make it inside the Bait ul Haram-the honorable house, as tears burst onto cheeks in pent-up, relief.

Nearby, 400 children who have never left their refugee camp homes in Jordan, swap jeans and trainers for the two piece of white cloth worn by male pilgrims. They have their prayers, for sick relatives, brave mothers, stateless grandparents rehearsed. They have praiseful litanies memorized.

I am swept along in a human perambulation of monotheism barefoot, anti-clockwise, around the black box in the desert, which is loved, but never, ever worshipped.

This is my turn to say sorry and thank you to God in the way He himself has laid out.