BEESTON, South Leeds – Costing £2.2 million, the new Jamia Masjid Abu Huraira mosque in Beeston will open to the public, following seven years of planning and fundraising by the community in South Leeds.

“Over the years as the community was getting bigger, the space became smaller and smaller,” the Kashmir Muslim Welfare Association (KMWA) vice chair Mahbub Nazir told LeedsLive.

“For years and years, we have tried to upkeep the building as much as possible.

“Yet for example, just last Friday for congregational prayers 150 people were forced to pray from on the street outside the building”, he said.

“This is simply not an appropriate setting and hasn’t been for many years.

“We feel really fortunate and blessed to have been able to pull together a team to make this new premises a reality.”

The new mosque replaces the former site at the old Co-op mill building on Hardy Street, which the KMWA had acquired over 30 years ago.

The group submitted the planning application to Leeds City Council in 2011, acquiring the vacant land on Catherine Grove. 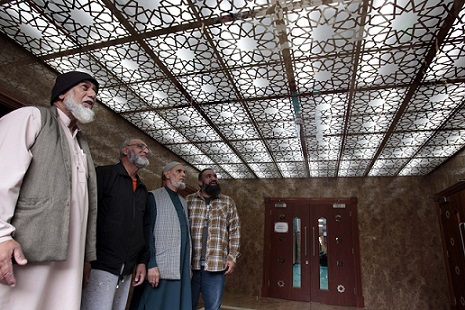 Vice chairman of the Mosque, Mahbub Nazir (right), with members of the mosque below the feature ceiling of the entrance hall

Over the past seven years, fundraisers have rallied the community and traveled across the country to raise the money needed to build the new mosque.

“We had to think about the best ways to utilize the space,” Mahbub added.

“There are facilities here now, including bereavement areas, which weren’t available to the community here in South Leeds.

“We have a state-of-the-art library opening soon, and will be using the former site to improve our offering for the younger community.”

The efforts to construct the new mosque were not limited to Leeds Muslims, with Muslim leaders coordinating with their Christian and Sikh neighbors.

“We work closely with the local churches and the gurdwara [a place of worship for Sikhs] and have done for a long time,” Mahbub

“Our relationships with local schools is also important and taking this collective responsibility in the community, working with the council, police and other charities.

Attended by key representatives from the community, the grand opening of the Jamia Masjid will take place on Sunday, September 16 at 2.30pm until 5.30pm.