A Rohingya boy carries a child after after crossing the Bangladesh-Myanmar border in Teknaf, Bangladesh, September 1, 2017. REUTERS/Mohammad Ponir Hossain
aaa

YANGON – Day after day, Rohingya Muslims in Yangon witness vanishing freedoms and opportunities, as well as rising persecution and hatred from their Buddhist neighbors and friends.

Fear filled the air in the city, the capital of Burma, after the Burmese military’s operation in Rakhine state in the west of the country in which complete Rohingya villages were destroyed.

The operation was running as Burmese governmental newspapers started publishing daily supplements and pictures of Rohingya Muslims, claiming they are terrorists.

“When we first saw those pictures, we wondered when will it be our turn to have our pictures in the paper?” Rahim Muddinn, 41, Rohingya Muslim teacher who spoke to Time in an interview on Tuesday.

“Nearly 250 photos each day. I believe one day it really could be my picture in the paper,” the Muslim teacher fears.

Like most of the other Rohingya who spoke with The Associated Press (AP), he used his Rohingya name because of safety worries.

Muddinn was born and raised in Yangon, far from the homeland of the Rohingya Muslim minority in Rakhine state, where bloody military operations have killed over 1,000 Muslims and driven nearly 700,000 Rohingya into refugee camps in neighboring Bangladesh.

Though Rohingya have always been persecuted in the Buddhist-majority nation, tensions increased in 2012 and violence flared again in 2016 when refugees reported widespread killing and rape by Burmese forces.

In January 2018, the AP confirmed, through extensive interviews with survivors and time-stamped video, a massacre and at least five mass graves, all previously unreported, in the village of Gu Dar Pyin, Rakhine.

“When I hear a motorcycle rev its engines near my home after midnight, I wonder if a policeman is coming to detain me,” Muddinn expressed.

“My wife, Amina, hasn’t left home by herself since 2012 because of shame and fear after a Buddhist spit on her because she wears a burqa.”

AboutIslam Exclusive: A Visit to Rohingya Refugees in Malaysia 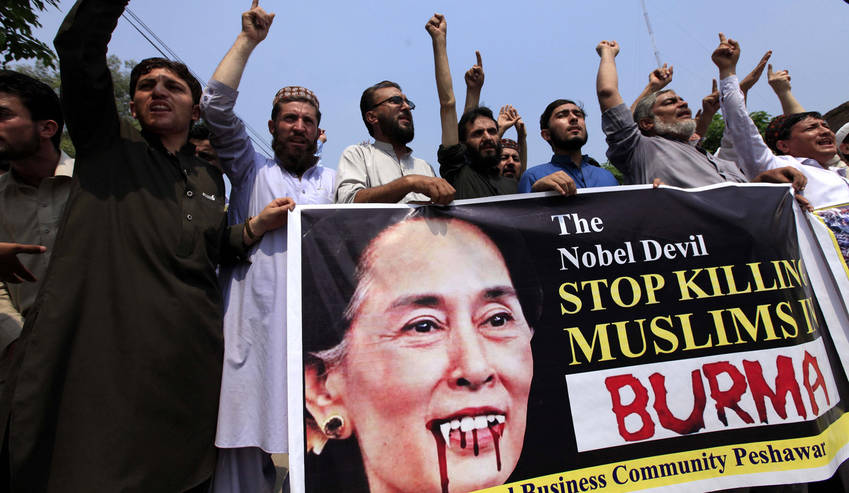 No Life, No Political Rights

Another Rohingya Muslim, Ajas, a 26-year-old college student in Yangon, said “The word ‘Rohingya’ is a dangerous thing to be called in this country. The government has brainwashed the whole country into thinking that we are illegal immigrants.”

Like some other Rohingya, he uses only a single name for safety.

The cards—used to apply for school, to set up bank accounts, and to get passports—are irreplaceable without a huge bribe because the Burmese government has long tried to take them from Rohingya people to strip them of citizenship.

Ordinary Muslim citizens of Burma aren’t the only victims for such Islamophobic harassments and erupting hatred, but even Muslim leaders and politicians are subjected to aggression to the extent of death.

In early 2017, a Buddhist gunman killed Ko Ni, a prominent member of Burma’s Muslim minority and a legal adviser for the ruling National League for Democracy party (NLD). He was shot in the head at the Yangon airport.

Ko Ni, who wasn’t Rohingya, had criticized the NLD in 2015 for not presenting Muslim candidates in the general election.

Abuse has intensified and Rohingya leaders risk their safety if they speak out publicly.

“We feel this everywhere,” said Kyaw Min, who spent years in prison on what he calls politically motivated charges.