Rohingya refugees arriving in Bangladesh after crossing the Naf River this month.
aaa

COX’S BAZAR, Bangladesh — A genocide. This is the best description of the horrible atrocities committed at the hand of Burmese security forces against helpless Rohingya community.

“People were holding the soldiers’ feet, begging for their lives,” Rajuma, a Rohingya Muslim whose child was thrown into the fire before soldiers gang-raped her, told NY Times.

“But they didn’t stop, they just kicked them off and killed them. They chopped people, they shot people, they raped us, they left us senseless.” 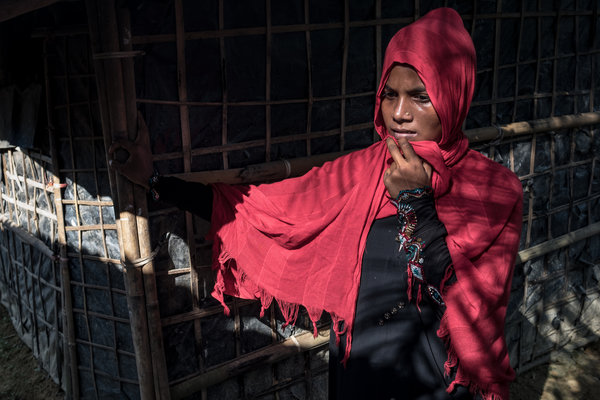 Rajuma, 20, saw her 18-month-old son and most of the rest of her family killed by soldiers in Myanmar. She is now in the Kutupalong refugee camp in Bangladesh.

In a hospital bed near Cox’s Bazar, the biggest town in this part of Bangladesh, Muhamedul Hassan, a Rohingya shopkeeper from a village called Monu Para, lies on a clean white sheet. Doctors say the fact he is still alive is a miracle.

On Aug. 27, Hassan said, around 20 soldiers from a nearby army base stormed into Monu Para and ordered all the men and any boys older than 10 to report to the house of a prominent Rohingya cattle trader.

The soldiers tied everyone’s hands behind their backs. They made them sit in the yard, heads down.

Around 400 men and boys were hunched over, Hassan said. They were sweating through their shirts. An army sergeant whom the villagers knew then pulled out a long, thin knife.

“People were calling for help,” Hassan said. “The boys were screaming out their mother’s name, their father’s name.”

Hassan said that in front of his eyes, dozens of people were decapitated or shot. He was shot three times — twice in the back and once in the chest — but all the bullets missed vital organs.

After the soldiers left, Hassan said, he stumbled away to his house, where his sister stuffed turmeric powder, the best they could do for an antiseptic, into his wounds. 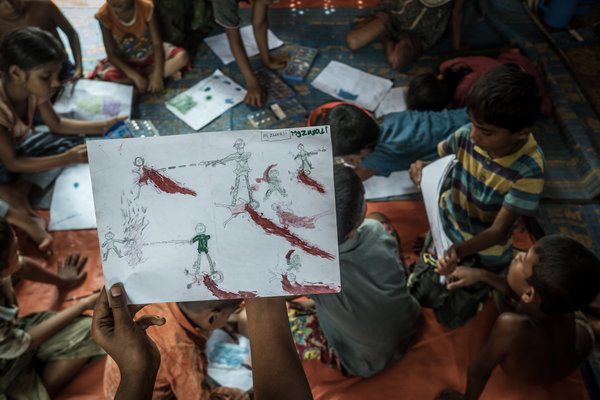 A drawing by a Rohingya boy about his experiences while fleeing Myanmar.

Human rights investigators said the gravest atrocities they have documented were committed from Aug. 25 to Sept. 1, the period right after the militant attacks. Many witnesses described government troops wantonly killing anyone they could get their hands on.

In Tula Toli, Rajuma fought as hard as she could to hold onto her baby, Muhammad Sadeque, about 18 months old.

But one soldier grabbed her hands, another grabbed her body, and another slugged her in the face with a club. A jagged scar now runs along her jaw.

The child was lifted away from her, his legs wiggling in the air.

“They threw my baby into a fire — they just flung him,” she said.

Rajuma said two soldiers then pulled her into a house, tore off her veil and dress and raped her. She said that her two sisters were raped and killed in the same room, and that in the next room, her mother and 10-year-old brother were shot.

At some point, Rajuma thought she had died. She lost consciousness. When she woke, the soldiers were gone, but the house was on fire.

She sprinted out naked, past her family’s bodies, past burning homes, and hid in a forest. Night fell, but she did not sleep.

In the morning she found an old T-shirt to wear and kept running. 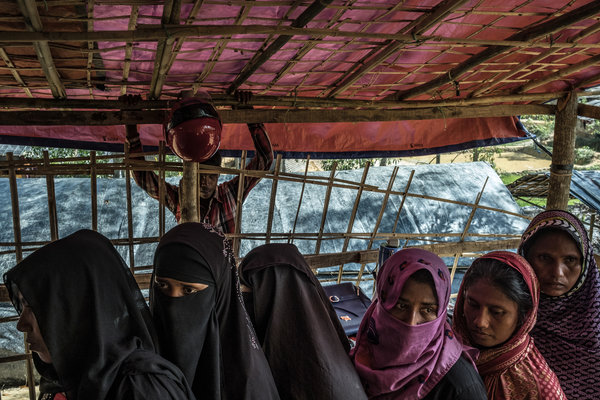 Many people in the refugee camps have been eerily stoic — seemingly traumatized past the ability to feel. In dozens of interviews with survivors who said their loved ones had been killed in front of them, not a single tear was shed.

But as she reached the end of her horrible testimony, Rajuma broke down.

“I can’t explain how hard it hurts,” she said, tears rolling off her cheeks, “to no longer hear my son call me ma.”

She hunched over on a plastic stool in another family’s hut, covered her mouth with a red veil and started sobbing so hard she could barely breathe.