I Shall Cleanse My Heart and Guard My Tongue… As Well As My Fingers That Hit the Keyboard!

Babies are often described as white canvases: innocent and mono-colored, untarnished and pure. The color, shade, or hue they finally assume comes from their surroundings — their family, extended relatives, peers, school, and the general environment that surrounds them, such as the mass media and the political landscape of the country, just to name a few.

Many homeschooling parents I have got to know choose the homeschooling route as it allows them to relay their family values to their children while curbing and controlling outside influences that carry negative connotations. After all, with the love of every child comes an innocent heart that needs to be nurtured and guided in order to attain success in this world and the hereafter.

Those of us who attended school were often advised by parents to respond to verbal bullying with this mentality: “Sticks and stones may break my bones, but words will never harm me.” Unfortunately, there has been no more a grossly mistaken sentence, as far as the tongue is concerned. Many people, even adults, are hurt by words — if not more than those who are physically injured by “sticks and stones.”

Words can defile, defame, shame, lead to lifelong arguments and bitter grudges, and spike at judgmental intonations, causing a great deal of grief. Since

negative influences, including “words,” tend to come from the environment that homeschoolers are so adamant to ward off, guarding the heart and the tongue becomes a code of conduct for those who choose to educate their families and keep all influences in-house.

Yet, for the modern homeschooler (i.e., one who relies heavily on the internet for educational resources), another organ besides the heart and the tongue needs to hold guard at all times. Ten additional organs to be exact: the eight fingers and two thumbs that hit the keyboard while surfing the internet.

It is not unusual for mothers who stay at home to spend a significant amount of time on the net — surfing for educational material, chatting with homeschooling networks, sharing learning ideas and philosophies, discussing latest parenting breakthroughs, blogging about their homeschooling journey, uploading pictures of their activities, or posting status updates or comments through social networks.

Unless there is a hard and fast rule that children are not allowed to use the computer under any circumstances, little homeschoolers become quickly acquainted with the many functions the World Wide Web has to offer. Many homeschoolers themselves are used to using online syllabi.

Some are exposed to graphics designing and computer programming, and others even have their own social-networking accounts. When this happens, parents have to take the next vigilant step in protecting their children from negative influences. After all, there is no wider horizon of vulnerability as compared to exposing a child to the internet.

Starting with themselves, mothers need to peruse a healthy sense of interactio 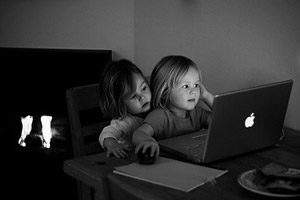 n when online. Bearing in mind that some children are able to read, employing kindness when interacting with peers is a good way to instil politeness among children. This can be seen through emails, forums, or even through networks such as Facebook and Twitter.

Verbal words that are unkind can be hurtful, but communicating through the internet widens the ambiguities of messages that are being sent. After all, the recipient is unable to gauge body language or facial expressions, and a simple opinion may turn ugly, blowing up into a huge disagreement if worded inappropriately. The best way to start an email, post, or response is probably to give the salaams. After all, it comes as second nature to us during speech; it should not be different when interacting virtually.

Like many Muslim mothers, it is also not unusual to read up on articles or posts that are derogatory or insulting to Islam, besides other personal beliefs such as staying at home, breastfeeding, or even homeschooling. Even such, Muslims who wish to respond should demonstrate calmness in their responses, and even more so when there are little homeschoolers who are peering over mommy’s shoulders.

It is easy to let your guard down while on the internet. Being at home and physically detached from other people quite possibly makes a person feel safe and guarded from terrible conflict, attacks, or any form of vulnerability. Some people describe interacting through the internet as providing complete freedom — you can log off any time you like.

Whether this is true or not, it is important to remember that every word that comes from our eight fingers and two thumbs so enthusiastically hitting away at the keyboard are being recorded by a higher authority. Every website we surf is being watched, every message we conclude and send is being saved, and every photo we upload is being archived for future reference. It is true. It says so here:But of course, for Muslims, there is no form of complete freedom in this world. There are some nuances about being watched on the net; internet critics often say that the FBI or the CIA are said to record our doodling, are watching our every move, and can even track us to our home.

Allah reminds us that guarding the heart and the tongue are equally important in the virtual world as it is in the physical realm of this life. His records after all are far more advanced that any form of computer programming stretch way beyond geographical location, and are far more intrinsic and detailed than any social networking site. 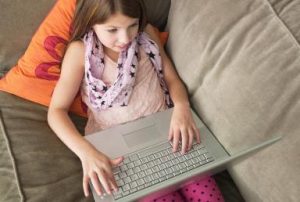 As cherries on the cake, homeschoolers who are heavy internet users are reminded that how we behave when online is reflected upon our children. No matter how much we want to curb peer pressure and media influences, the way we conduct ourselves on the net sends important messages to the little white canvases so eagerly awaiting their color, shade, or hue.

It ranges from the emoticon used to mitigate an argument to the website that we often visit while being watched by the toddlers, the people who are our chat-buddies or on our friends list, the YouTube video that is being overplayed as a way to de-stress, or the picture of ourselves being uploaded in hopes to garner as many “likes” as possible, even if those “likes” come from non-mahram brothers. Being on the net also opens doors to indirect gossip, if discussions do not observe proper decency.

Placing the computer in the center of the family room or wherever the family convenes the most is a good way to curb undesirable internet behavior, especially if a mother finds inside her children sheer motivation to be on her best behavior at all times. Homeschooling certainly presents itself to some as the safer, more appealing route for educating today’s children, amid droves of negative influences that surround communities. However, homeschooling does not come with such freedom, especially if the net is an integral part of the family.

The serious conduct of any Muslim to cleanse their heart and guard their tongue has to be imbued among homeschooling parents, including guarding those 10 frantic organs that type away at the keyboard — that are also responsible for painting colors, shades and hues on baby-pure canvases.