The Quran is truly ‘soul food’–it is the food for our souls, the healing for our hearts and our conversation with the Divine.
aaa

Argumentation and controversy over small issues is a problem that plagues our communities, but it’s not the problem per se. It is a symptom of a deeper, more serious issue within the self.

The root is a lack of spirituality and spiritual purity within the self. When an individual argues, especially in issues of faith, there is an underlying disease within the heart that is fueling the argumentation–the desire to prove the opponent wrong, to satisfy the ego and to prove one’s worth by belittling another.

This is further beautified for the people by Satan when he convinces them that they are arguing for the truth because clearly the other person is on a false path—he’s just trying to ‘guide’ the other person.

This attitude cultivates indifference towards others, and leads to contempt and discord between people. The irony is that this is far from the Quranic directive. I believe that one of the reasons this occurs is because there is a lack of spiritual connection with the Quran and the Divine message embedded therein–an abandonment of the Quranic message. God says:

O mankind, there has come to you instruction from your Lord [this Qur’an], and healing for what is in the breasts and guidance and mercy for the believers. (10:57)

This is why not abandoning the Quran is so critical for our spiritual development–the Quran grounds us by reminding us constantly of God, of the temporal nature of the life of this world, of death, of the Resurrection, of Judgment Day, of Paradise and of Hell. It puts everything into perspective.

“If our hearts were truly pure, we would never get enough of the Words of our Lord, and I hate that one day passes with me not looking in the Quran.” 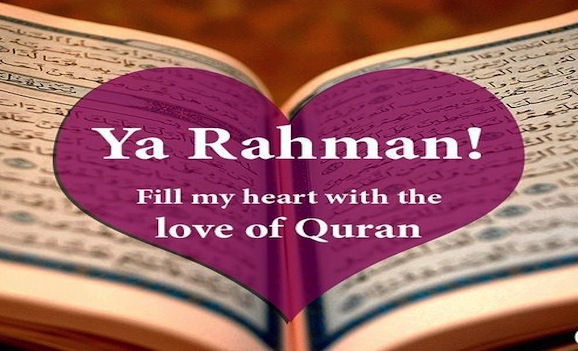 We should preoccupy ourselves with the Quran, and not distract ourselves by arguing over issues that do not benefit us. The Quran is truly ‘soul food’–it is the food for our souls, the healing for our hearts and our conversation with the Divine. Our bodies were created from this Earth and God placed sustenance for our body in the Earth as well. Everything we eat eventually originates from the Earth.

Our spirit, however, is from God; as such, its sustenance must also come from its place of origin–God. This is why the heart, when engaged with the Quran, feels tranquility and peace, and when it’s away from the Quran it slowly hardens up until it dies.

“The keys to the life of the heart lie in reflecting upon the Quran, being humble before Allah in secret, and leaving sins.”

When a person turns away from the Quran, the heart starts to starve just as the body starves when it is not fed; as a result, life itself becomes depressing and incomplete, as the individual preoccupies themselves in other matters, seeking to fill that void within. Thus, argumentation and controversy becomes an avenue to satisfy the self.

Abandoning the Quran can range from not listening to it to not acting upon it to not referring to it as a source of guidance to not reflecting upon it and seeking it as a cure for our spiritual problems and diseases of the heart. All of this falls, as explained by Ibn Qayyim, under the explanation of the verse:

And the Messenger has said: “O My Lord, indeed my people have taken this Qur’an as [a thing] abandoned. (25:30)

When we inspect the Quran and the verses where it commands us and forbids us, we always find it coupled with a reminder to have taqwa (awareness) of God or to reflect on Him or a reminder of Paradise and Hell.

The point is not doing the action correctly; rather there are spiritual dimensions such as sincerity are necessary. Their absence voids the good deed itself.

All this is part of the Quranic development which builds the spiritual connection a person has with God through those commandments and prohibitions. It allows a person to see the underlying goal of the directives–worshiping God and having a relationship with the Creator and functioning as a community based upon brotherhood.

So when a person engages in argumentation, he forgets this additional role the Quran plays in terms of the inner aspects of worship.

The Quran makes us focus on the important issues and ties us all together based upon our common goal–which is getting to Paradise and avoiding Hell.