Allah diversified the acts of worship for you because He knows how quickly you get bored. And He did not permit you certain acts of worship at certain times so you do not go to extremes. The objective is to perfect your prayers not to merely perform them. Not every performer of prayers perfects them.

This word of wisdom is related to a very important topic in our journey to Allah which is the quality of worship. A believer who is in continuous worship may feel bored at some point. Allah, out of His mercy, knows that we, humans, could naturally feel bored, even from worship. Therefore, He diversified the acts of worship so we can worship Him in a variety of ways.

When Allah opens for you the door of reading the Qur’an, you may wish to read it all the time. But it is not allowed to read the Qur’an while we are kneeling down or prostrating in prayer, in the toilet, or while we are in a state of ritual non-cleanliness.

Because Allah knows our nature, He diversified the acts of worship and made some of them prohibited at certain times.

Then, when Allah guides you to perform an act of worship, you have to perfect it and ascend in the levels of quality of worship. The Sheikh gives the example of prayer as he says:

“The objective is to perfect your prayers not to merely perform them. Not every performer of prayer perfects them”.

When Allah talks about prayer in the Qur’an, he asked us to {establish prayers}. (Al-Baqarah 2: 43) Establishing the prayer is different from merely performing it. Establishing a prayer is about concentration and humbleness during the prayer. Allah says:

{Truly, to a happy state shall attain the believers those who humble themselves in their prayer}. (Al-Mu’minun 23: 1-2)

Humbleness is the objective of avoiding the performance of prayer at certain times. Whether one feels bored or goes to extremes and prays non-stop, humbleness cannot be achieved.

According to Sufis, humbleness in prayers (al-khushu`) is a branch of knowledge. This is supported by the prophetic tradition in which the Prophet (peace and blessings be upon him) talked about the signs of the Day of Judgment, as reported by Abu Ad-Darda’:

“We were with the Prophet. He looked at the sky and said: “This is a time when knowledge is to be taken away from people until they cannot gain any of it.“

`Ubadah ibn As-samit (may Allah be pleased with him) commented on the report and said: If you want, I can tell you about the first branch of knowledge that will be removed from people; it is humbleness in prayers. You may enter a big mosque but you do not see one man in a state of humbleness”. (At-Tirmidhi)

The first level is humiliation which means that you pray to Allah and feel humiliated before Him. This is reflected in the movements of the prayer. We kneel down and prostrate only to Allah.

These movements are manifestations of humiliation which should be shown only to Allah. Humiliation requires that you feel that you are weak and that Allah is the Powerful, the Rich, and the Almighty.

Humiliation is the result of neediness as the Sheikh explained before when he said:

“The tree of humiliation stems from a seed of neediness”.

When you feel you are in need of Allah, a state of humbleness is produced.

{Whenever the verses of the Most Gracious were conveyed unto them [the prophets], they would fall down before Him, prostrating themselves and weeping}. (Maryam 19: 58)

This is the level of feeling awe of Allah which might lead to crying.

{Allah bestows from on high the best of all teachings in the shape of a divine writ fully consistent within itself, repeating each statement [of the truth] in manifold forms [a divine writ] whereat shiver the skins of all who of their Sustainer stand in awe: [but] in the end their skins and their hearts do soften at the remembrance of [the grace of] Allah.

Such is Allah’s guidance: He guides therewith him that wills [to be guided] whereas he whom Allah lets go astray can never find any guide}. (Az-Zummar 39: 23)

One of the Companions reported that he watched the Prophet (peace and blessings be upon him) as he was praying. He said that he heard a whistling sound from the chest of the Prophet resembling the sound of a boiling kettle as he was weeping. (Abu Dawud)

The third level is happiness. The best state of humbleness in prayer is to find yourself happy and pleased because of being in the presence of Allah. So you actually feel happy and elated when you read the Qur’an, mention Allah or praise Him.

This is the highest level of humbleness in prayers. Angels descend from heavens to listen to you and a state of tranquility prevails in the place. 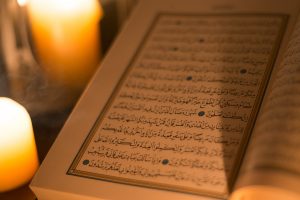 It is reported that while Usayd ibn Hudayr was reciting surat Al-Baqarah (the second chapter of the Qur’an) at night, and his horse was tied beside him, the horse was suddenly startled and troubled. When he stopped reciting, the horse became quiet, and when he started again, the horse was startled again.

When he took the boy away and looked towards the sky, he could not see it. All he saw was a low cloud full of lamps!

Ibn Hudair replied, “O Allah’s Messenger! My son, Yahya was near the horse and I was afraid that it might trample on him, so I looked towards the sky, and went to him. When I looked at the sky, I saw something like a cloud containing what looked like lamps, so I went out in order not to see it”.

“Those were Angels who came near to you for your voice and if you had kept on reciting till dawn, it would have remained there till morning when people would have seen it as it would not have disappeared“. (Al-Bukhari)

Al-Bara’ reported that a person was reciting surat Al-Kahf and there was a horse tied with two ropes at his side, a cloud overshadowed him, and as it began to come nearer and nearer his horse began to take fright from it. He went and mentioned that to the Prophet (peace and blessings be upon him) in the morning, and the Prophet said:

“That was Tranquility. It came down at the recitation of the Qur’an“. (Muslim)

Bear in mind, however, that when Allah takes you to a level of happiness in your prayers, this will be out of His Grace not because of your deeds. The Arab poem goes:

In the twinkling of an eye.

Allah may change everything.

From one state to another.

However, there are means that one could follow in order to ascend to that level, By Allah’s Grace. Among these means is to reflect upon the meaning of the Qur’an, and feeling humble by calling to mind how great Allah is.

The three levels mentioned above may be expressed in various forms of worship, not only in prayer.

The level of submission (islam) to Allah is the outward work. In prayers, it is performing the moves of the prayers by standing, kneeling down and prostration. When it comes charity, it is giving out money. In fasting, it is the abstaining from eating and drinking. As for pilgrimage, it is circumnutating around the Ka`bah, going between the two hills of As-Safa and Al-Marwah, and offering the sacrifice.

However, the level of belief (iman) is the work of the heart. The basic work of the heart is to believe in Allah, His angels, His scriptures, His messengers, the Day of Judgment, and that Allah created all things to come, good or bad. All this leads to a wider meaning of the rituals.

So, prayer is not only about kneeling down and prostration; but it is about humbleness, feeling awe of Allah, and happiness as well.

Charity is not merely an act of giving money, it is about having mercy upon the poor and indifference about the world.

Fasting is not only about abstaining from food and drink, it is also about patience, mentioning Allah, thankfulness, and meditation.

Pilgrimage is not only by walking or jogging around the Ka`bah, going between the two hills of As-Safa and Al-Marwah and offering the sacrifice, it is also about remembering the Hereafter, uniting with fellow believers, and following the steps of the prophets and messengers.

The level of excellence (ihsan) comes next. It entails to worship Allah as though you are seeing Him, and while you see Him not yet truly He sees you.

In terms of remembrance, and as the Sheikh explained, the level of attentiveness is the level of submission (islam), i.e., you have to be attentive to when you read the Qur’an or when you mention Allah.

The level of being present with Allah is the level of belief (iman), i.e., you reflect on the meaning so you feel awe of Allah.

The level of being absent from anything else is the level of excellence (ihsan) in which you are not paying attention to what is going around you, but you are fully present with Allah.

We pray to Allah to elevate us from submission to belief, and from belief to excellence, amen.