Evidence from the Qur’an:

All Qur’anic texts related to this issue urge Muslims, males and females alike, to frequent mosques and offer prayer therein:

{[Such niches are] in mosques which Allah has ordered to be raised and that His name be mentioned therein; exalting Him within them in the morning and the evenings.

[Are] men whom neither commerce nor sale distracts from the remembrance of Allah and performance of prayer and giving of Zakah. They fear a Day in which the hearts and eyes will [fearfully] turn about} (An-Nur 24:36-37)

{Do not stand [for prayer] within it – ever. A mosque founded on righteousness from the first day is more worthy for you to stand in. Within it are men who love to purify themselves; and Allah loves those who purify themselves} (At-Tawbah: 108).

Some exegetes misunderstood the term rijal (translated above as men) in these two verses, interpreting it as meaning males, to the exclusion of females. This interpretation had a negative impact on the conventional conception of Muslim communities, who thought that there is no room for women in the Mosque. Ibn Kathir, for instance, commented on the word “men”, in the verse quoted above from Surat An-Nur, saying:

“As for women, their praying at home is better for them … And it is permissible for them to attend the congregational prayer offered by men on condition that she does not harm any men by wearing manifest adornments and perfume.”[1]

Yet, the word “men” in practical usage, in both conventional Arabic and in the language of the Qur’an, applies to both males and females. For instance, Almighty Allah says, {and on [its] elevations are men who recognize all by their mark} (Al-A`raf 7: 46), and {Among the believers are men true to what they promised Allah} (Al-Ahzab 33: 23). In these two verses, the word “men” applies to both males and females. 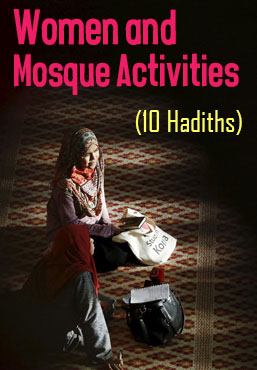 However, when the address is specific to males only, the word “men” is coupled with the word “women” within the same context, {And if not for believing men and believing women whom you did not know….} (Al-Fath 48: 25).

Literally, distinguished women are described as ‘rijal‘ or ‘men’ in conventional Arabic usage. For instance, among the usages mentioned in Mukhtar As-Sihah under the entry “R J L (the root of the word man in Arabic)” the following: “niswatun rijal (here, the word men is used as an adjective for females) … and a woman can be called rajulah (female form of rajul or man).”

It is also reported that: Lady `A’ishah (may Allah be pleased with her) was a ‘rajulah‘ in terms of her opinions. It is again stated in Lisan Al-`Arab that: In a reported conversation between Abu Zayd al-Killabi and his wife, “The two ‘men’ fiercely argued”, with the two men referring to him and his wife.[2]

On the other hand, there are verses that urge both men and women to frequent the mosques and to dress and act properly before doing so, such as the verses in which Almighty Allah says,

{The mosques of Allah are only to be maintained by those who believe in Allah and the Last Day and establish prayer and give zakah and do not fear except Allah, for it is expected that those will be of the [rightly] guided} (At-Tawbah 9: 18),

{Say, [O Muhammad], “My Lord has ordered justice and that you maintain yourselves [in worship of Him] at every place [or time] of prostration, and invoke Him, sincere to Him in religion.” Just as He originated you, you will return [to life]} (Al-A`raf 7: 29), and

{O children of Adam, take your adornment at every mosque, and eat and drink, but be not excessive. Indeed, He likes not those who commit excess.} (Al-A`raf 7: 31).

Even when the Jinn addressed their folks, the Qur’an reports them as saying, {And the mosques are for Allah, so do not invoke with Allah anyone.} (Al-Jinn 72: 18)

Besides, the Qur’an clearly forbids preventing the people from frequenting the mosques, with Almighty Allah’s saying,

{And who are more unjust than those who prevent the name of Allah from being mentioned in His mosques and strive toward their destruction. It is not for them to enter them except in fear. For them in this world is disgrace, and they will have in the Hereafter a great punishment} (Al-Baqarah: 114).