Among the scores of authentic Hadiths indicating that women’s presence in the mosque at all times and on all occasions was permissible, here are a few examples:

It was narrated from lady `A’ishah (may Allah be pleased with her) that she said,

“The believing women, covered with their veiling sheets, used to attend the Fajr prayer with Allah’s Messenger, and after finishing the prayer they would return to their homes.“[3]

It is also narrated that Ash-Sha`bi said: We entered upon Fatimah bint Qays, and she said, “It was announced publicly that the people should gather for prayer, and then I was among those heading for the Mosque.”

She added, “I was in the front row of women, which was behind the last row of men, when I heard the Prophet (peace and blessings be upon him) say while he was on the pulpit, ‘Indeed, paternal cousins of Ad-Dary sailed the sea…“[4]

“I came to `A’ishah (may Allah be pleased with her), wife of the Prophet (peace and blessings be upon him), when the sun had eclipsed, and found out that the people were standing in prayer …

when the Prophet (peace and blessings be upon him) finished the prayer, he thanked and praised Almighty Allah, and then said …”[5] 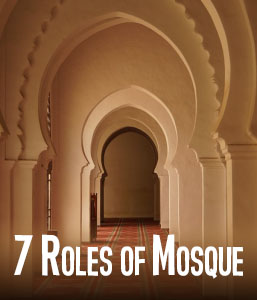 It was narrated from lady `A’ishah (may Allah be pleased with her) that she said:

Sa`d was wounded on the Battle of the Al-Khandaq (Ditch) … Then, the Prophet (peace and blessings be upon him) set up a tent in the Mosque (for him) to be able to visit him at such a close distance.[6]

Commenting on this narration, Ibn Hajar stated that: The Messenger of Allah (peace and blessings be upon him) let Sa`d stay in Rufaydah’s tent near his Mosque, and she was known for treating the wounded, saying,

“let him stay in her tent so that I can visit him from a close distance.“[7]

It was narrated from lady `A’ishah (may Allah be pleased with her) that there was a black female slave owned by an Arab tribe; they freed her but she stayed with them. The girl said:

Once one of the (tribe’s) girls came out wearing a red leather scarf decorated with precious stones. It fell from her or she placed it somewhere.

A kite passed by that place, saw it lying there and mistaking it for a piece of meat, flew away with it. Those people searched for it but they did not find it. So, they accused me of stealing it and started searching me and even searched my private parts.

“By Allah, while I was standing (in that state) with those people, the same kite passed by them and dropped the red scarf and it fell amongst them. I told them, ‘This is what you accused me of and I was innocent and now this is it.”

Lady `A’ishah (may Allah be pleased with her) added:

That slave girl came to Allah’s Messenger (peace and blessings be upon him) and embraced Islam. She had a tent or a small room with a low roof in the Mosque.

She used to visit me and chat with me. Whenever she sat with me, she would recite the following, “The day of the scarf (band) was one of the wonders of our Lord, verily He rescued me from the disbelievers’ town.”

Lady `A’ishah (may Allah be pleased with her) added,

“Once I asked her, ‘What is the matter with you? Whenever you sit with me, you always recite [those poetic verses.] On that she told me the whole story.”[8]